Gibraltar Puts Brexit Talks “Between a Rock and Hard Place” 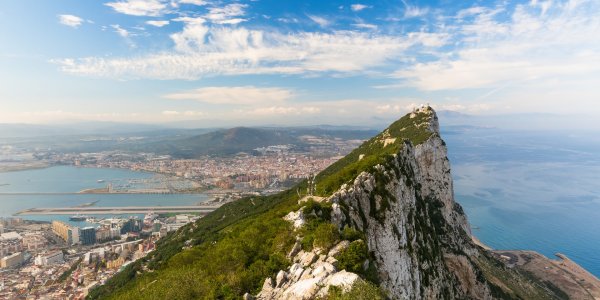 Just when you think there can’t be more intractable complications in the Brexit talks between the United Kingdom and the EU, another seemingly insoluble issue has arisen. There were already a host of extremely difficult problems between the two parties (economic/banking issues, post-Brexit Northern Ireland-Ireland border rules, immigration status of EU nations’ citizens living in the UK and vice versa, monetary and trade issues, etc.). Now it has become apparent that the post-Brexit status of British Gibraltar may become one of the thorniest issues of all. In elaborating on the title of this post, the “rock” is, of course, Gibraltar, and the “hard place” is the looming deadlock between the UK and Spain on the matter.

Gibraltar has been a British overseas territory for over three centuries, but Spain is still smarting over the fact that this tip of the Iberian peninsula is British-owned, not Spanish-owned. The people of Gibraltar clearly want to stay British, as the results of referenda on the subject have demonstrated. Briefly, here are some of the issues pertaining to the Brexit talks.

The EU, no doubt at the behest of Spain, is playing hardball with the UK re: Gibraltar, and is demanding in a rather hostile tone that the UK reach some kind of mutually agreeable pact with Spain re: control over Gibraltar before any Brexit package is approved (first link). Spain itself also is making demands of the British re: Gibraltar. The UK’s position is that Gibraltar is automatically included in any Brexit deal because it is already a “territory under British protection.” Obviously, Spain wants a new deal which will give Spain some kind of shared sovereignty over Gibraltar and it will want a timetable for the UK handing over Gibraltar to full Spanish sovereignty in the future. The British position is that the only acceptable outcome is the continuance of the longstanding status quo. Indeed, when it appeared that Prime Minister Theresa May might be going wobbly over the Gibraltar issue, she created such a firestorm among her British constituents that Britain’s Foreign Secretary, Boris Johnson, had to make a categorical statement that the “UK remains implacable and rock-like in our support for Gibraltar” (second link). The third link cites the public statement by a former conservative (Tory) party leader that strongly infers that the British government will go to war with Spain if Spain attempts to seize Gibraltar and compared the current situation to the time that former Prime Minister, Margaret Thatcher, did go to war with Argentina to recover the Falklands Islands when Argentina seized that British territory.

Now that each side has diplomatically told the other side to “go to hell,” we will see how this dispute unfolds as part of the overall Brexit negotiations. This dispute could torpedo the entire Brexit negotiations. If Spain demands some kind of shared sovereignty as part of the EU’s final negotiating position, then a hard Brexit seems more inevitable because there seems to be zero chance that the British House of Commons will vote to approve the deal unless Gibraltar’s current status is recognized and protected. .

A “hard Brexit” means that the UK would leave the EU in early 2019 with no agreement in place. It would result in lots of disruptions. The UK would have to negotiate bilateral trade/financial/travel/citizenship status deals with each current EU nation instead of having one deal to cover all nations. That would be very easy with some EU nations and very hard with other EU nations. It would also mean that the UK could pay no money at all to the EU for any commitments after the date of its exit (this would be very harmful to the EU so the EU has a strong motivation to come to an agreement with the UK to avoid a hard Brexit). Industries and exporters in both the UK and the EU could be hard hit in a hard Brexit. Germany is one of the most pro-EU nations so it might take a hard posture toward the UK, but that might result in mass layoffs of German auto workers as the UK could buy autos made in the USA, Canada and Mexico instead of in Germany and Europe. Indeed, if the EU negotiators insist on a hard Brexit, it might cause so much pain and disruption in some EU nations that they would leave the EU themselves. Some EU nations’ governments could fall quickly if a hard Brexit causes too much suffering among their citizens. I don’t see that the EU negotiators realize these dangers for their side.

This modern intractable dispute about Gibraltar has its roots in an ancient promise made by God to the biblical patriarch, Abraham. Because of Abraham’s obedience to God, God gave Abraham many blessings to be possessed by his descendants throughout future generations. These collective blessings are called the “birthright” blessings, and they were given by Abraham to his son, Isaac (Genesis 17:19), who gave them to his son Jacob/Israel. When Jacob (later named “Israel”) was dying, he gave the majority of the birthright blessings to the two sons of Joseph, named Ephraim and Manasseh and various pronouncements or blessings to all twelve of his sons were also given for the “latter days” (Genesis 48-49). Israel’s blessing of Ephraim and Manasseh in verse 16 included the prophecy that they would “grow into a multitude in the midst of the earth” (they would have very large populations and they would be located favorably in the middle latitudes of the temperate zones). That verse also prophesied that these two tribes of Israel would also have the name of Abraham’s son, Isaac, permanently stamped on them, and Genesis 21:12 had also mentioned this very important aspect of the birthright promise. This promise from God was fulfilled throughout history as they were called Sacae by the Greeks, Saka by the Persians and Saxons by the Romans. These Sacae/Saka/Saxon “brother” tribes were to become a large grouping or company of nations and a single great nation. Ephraim was to be the company of nations, and Manasseh would be the single great nation (verse 19-20). It is not hard to identify these two tribes in the modern world as the British Commonwealth of nations (Ephraim) and the single great nation of the USA (Manasseh). Genesis 48:20 states “he [Israel] set Ephraim before Manasseh (emphasis added).” In accordance with this prophecy, the British Empire and the British pound sterling dominated the world map and world commerce for centuries before the USA assumed the dominant world-power role and the US dollar became the dominant global currency after World War II. The Ephraimite British did, indeed, inherit their dominant blessing centuries “before” the Manassehite Americans received their time of dominance after the sun set on the British Empire.There are a host of historical facts confirming that the Israelite tribes of Ephraim and Manasseh are the modern British and American nations. Readers are referred to my free article, The United States in Bible Prophecy, for a greater listing of these facts as it pertains to the American nation. My books, available for ordering at my homepage, have extensive documentation re: the modern locations of all the tribes of Israel among the modern nations. Genesis 48-49 specifically have applicability in “the latter days” of our current age (Genesis 49:1), which can easily be proven to be our modern times (see my article, Are We Living in the Biblical Latter Days?).

How does Gibraltar fit into this birthright blessing? It has been a part of this biblical blessing since approximately 1000 BC. The birthright blessing also included a promise from God to Abraham in Genesis 22:17 that his birthright descendants would be given “the gates of their enemies.” “Gates” are geopolitical choke-points and controlling territories on the world map just like “gates” controlled access to an ancient walled city. Gibraltar (anciently called “the pillars of Hercules”) was controlled by the alliance of the Phoenicians and Israelites throughout the time of the kingdom of Israel, and after Israel’s fall, their Carthaginian colonists and refugees built the empire of Carthage–which also controlled Gibraltar for centuries. My books make clear that the fact that Phoenicia and Carthage controlled Gibraltar for most of the first millennium BC meant that Greece and Rome remained landlocked powers with little or no rights to enter the Atlantic Ocean. Not allowed access to the world’s oceans, Greece and Rome thought the world was flat, while the Phoenician/Israelite and Carthaginian powers knew it was round as they traveled all the oceans (solid documentation of this “diffusionist” view of ancient history is contained in my books). However, I’ll offer two brief illustrations of this fact. The Bible was written within the Phoenician/Israelite culture and it includes many maritime references that people simply “read over.” Isaiah 40:22 states that God “sits on the circle of the earth (emphasis added).” Obviously, the reference to the earth as being circular shows it was understood by the ancient Hebrews/Israelites that the earth was a sphere. It is also clear their ships reached the polar ice caps as they explored all the world’s oceans. Job 38:30 references a part of the oceans where “the waters are hid as with a stone, and the face of the deep is frozen.” Where are the oceans hard as a stone and frozen solid? The polar ice caps. The Bible shows this was common knowledge in very ancient times.

The British Empire also was given Gibraltar as a birthright possession by God centuries ago, and this was most strategic in many wars. It shut up enemy fleets inside the Mediterranean Sea while granting free entry and exit to British and allied ships. In World War II, British control of Gibraltar and another vital “gate,” the Suez Canal, kept the Axis powers bottled up inside the Mediterranean Sea while giving the British and allied forces control of all entry points to the Mediterranean Sea. This strategic blessing for the British was pre-determined by a promise God made to Abraham millennia ago. Other British “gates” included the Falkland Islands and the Cape of Good Hope while the USA had the strategic gate of the Panama Canal–controlling the only easy access between the Atlantic and Pacific Oceans.

The fulfillment of ancient biblical prophecies throughout history and in our modern world confirms that the Creator God who authored the Bible’s prophecies is both real and sovereign over the destinies of the nations. In Isaiah 41:21-26 and 46:9-11, God challenges everyone to look at his ability to fulfill his prophecies far into the future as proof of his invisible reality and involvement with mankind’s history. If you order my books and read my articles on prophetic topics, you will see how many of the Bible’s key prophecies have been implemented by God throughout all of mankind’s history and many are being fulfilled right now…today. He is firmly in control of the overall flow of world events. Those who do not understand God’s reality and his prophecies about world events for our time will be blind to what is actually unfolding in the years ahead of us. Those who do understand the Bible and its prophecies will not be deceived by the ebb and flow of future events.

It looks like the EU wants the British to give up their birthright blessing of controlling Gibraltar. The British would be foolish to give away so great a blessing from the Creator God. Biblical prophecy really does indicate it is God’s desire that they keep it.