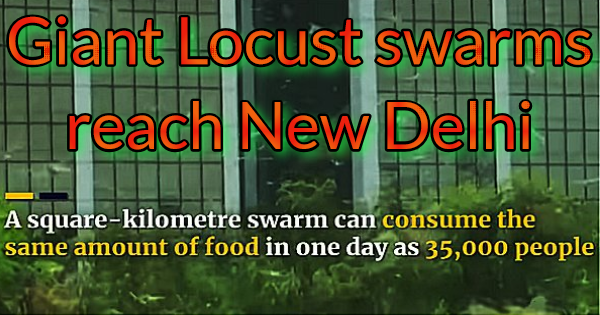 While the world’s attention is focused on the global Covid-19 pandemic, another major pestilence is spreading into and affecting steadily more nations. This “pestilence” is the growing regions of Africa and Asia affected by mega-swarms of locusts that are ravaging the food supplies of many nations. Previous posts on this topic documented that at least nine African nations were being attacked by these spreading swarms and that these swarms had engulfed the Arabian Peninsula and were causing emergencies in Iran and Pakistan. These locust swarms are expanding their numbers and the range of their growing damage to the world’s food supplies.


The first link reports on the dangers posed to India’s capital city, New Delhi, by locust swarms spreading through Western India from Pakistan. The second link offers a video-link showing the riveting impact of the swarms after they entered New Delhi’s suburbs. I urge all readers to watch the videos in this post as you will find them very informative and gripping. It is amazing to see how numerous these swarms of locusts really are! More than one link asserts that one square kilometer of locusts can consume as much vegetation in one day as would be eaten by 35,000 people, and there are very many square kilometers of locusts now eating ever-more greenery in Africa and Asia.


Why has there been such an explosion of locust swarms in Africa and Asia? This question is answered in the third link with easy-to-follow explanations. Exceedingly unusual weather patterns brought huge rainfall to the usually bone-dry southern Arabian Peninsula, creating lakes where there used to be just rocks and sand dunes. Such moisture produced an abundance of vegetation where there usually is none. This created ideal conditions for an explosion in the number of desert locusts, which have continued to multiply into more swarms as their range expands into new countries. This locust outbreak is the worst in Kenya in 70 years, and one voice on a video about the swarms in India says the same thing about how rare such a locust outbreak is in India. These locust swarms are so dense they have even diverted airliners from their usual routes. Obviously, as these swarms spread southward and eastward through India, they will consume a large amount of food that would usually feed the approximately 1.2 billion people living in India. So far, nothing is stopping their eastward expansion, so it may only be a matter of time until they reach Southeast Asian nations, and from there, they can easily expand into China, Indonesia, etc.


There is another region of the earth that may be at risk of receiving locust swarms. The very numerous and light locusts are spread widely through wind currents, and one link’s map of their range includes portions of the central African parts of the Sahara desert. The Saharan region has been generating unusually large and strong sand-storms sweeping westward from Africa across the Atlantic Ocean into the Caribbean region, the Gulf of Mexico and North America. These sand storms have obscured sunsets and darkened skies in the Americas (fourth link and fifth link). Locust swarms are spread by strong winds into new areas. If a locust swarm in the Saharan region of Africa is blown across the Atlantic Ocean to the Americas in one of these powerful Saharan dust storms, the locust plague will suddenly be present in the nations of the Western Hemisphere as well. If economies already damaged by all the lock-downs in response to the Covid-19 pandemic are also hit hard by locust plagues, the world will be in for real global food shortages.


A recent post of mine cited the UN’s warning about an imminent global food shortage of “biblical proportions” (sixth link). The UN may not realize just how right it is with such language. Both Matthew 24:6-8 and Revelation 6:5-6 prophesied that a global food shortage will strike the world in the time that will precede the return of Jesus Christ to set up his global divine government that will replace all human governments on the earth (Revelation 19:11-20:4). When the Creator God who inspired these prophecies decides to fulfill them, there is no power in the physical or spirit world that can stop him from doing so. Matthew 24:6-8 foretells that this latter-day period of time will be marked by wars, rumors of wars, seismic activity, and famines. Revelation 6:5-6 warns that food will be in short supply and will be rationed by price in the latter-day famines. If scarce food is rationed by price, it means many of the less-fortunate will face starvation. If hungry nations also have considerable weaponry, they will go to war to take food from nearby nations rather than quietly starve to death. Famines and food shortages could generate many wars and “rumors of wars.”


As global problems have steadily worsened during 2020, we may have entered the time called the “beginning of sorrows” foretold in Matthew 24:6-8. If we have, then we can expect conditions to worsen globally until mankind has to face the fact that an all-powerful Creator Being is beginning to bring about conditions on the earth that will, hopefully, jar mankind to its senses and seek that Creator God in a repentant state of mind. I’d love to see cities, states, provinces, or nations actually repent and come under God’s protection and favor, but the latter-day prophecies do not indicate such repentance is likely. For more evidence that we are, indeed, living in the latter-days that will precede the return of Jesus Christ who will replace all human rulers with his resurrected saints (I Thessalonian 3:13, Revelation 20:4), please read my article Are We Living in the Biblical Latter Days? There are many biblically-based articles on topics of interest at my website. I invite you to visit the “Articles” tab on my website’s homepage to see if there are topics of personal interest to you.