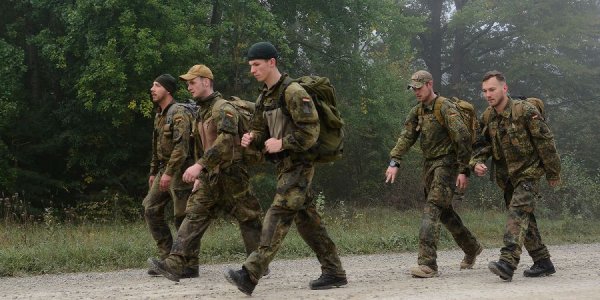 Sometimes I see an article that “stands on its own” in deserving a post about its content. This is one such occasion. I’ve posted about how weak some of the NATO nations’ defense budgets are, but the link below indicates Germany has so woefully neglected its military forces that they scarcely even have a military force worthy of the name.

The link states that Germany actually had to use broomsticks as fantasized machine guns in a military exercise because they had no real weaponry available. The link also states that Germany, the nation that once filled the Atlantic Ocean with U-boats, does not have a single operational submarine available. The assault weapons used by the German army don’t work right in hot weather [Note to Russia: Be sure to attack in summer.] Germany’s helicopter fleet is unreliable and half of their tanks are non-functional–leaving the entire nation with only “95 functioning tanks.” Indeed, the link rightfully observes that Germany’s military has a “lack of real weapons.” That is putting it mildly.  Readers can review the link for the full story on how defenseless Germany really is. I did a post on Poland as a rising nation in Europe not long ago. I cannot help but ironically observe that if World War II were starting today, Poland’s military would likely conquer Germany in a very short time.

Germany is a nation in trouble. It cannot defend itself. It is overrun with Islamic and African refugees, and–as a result of having no “hard power,” it has only minimal “soft power” in global matters. How can a nation that is such an industrial and commercial powerhouse have a military policy which makes it a laughingstock among the nations? Oh yes. One more thing. Germany, as of this writing, still has formed no real government since its national election months ago. It seems Germany is headed toward a situation where it will either have a weak and fractious government formed between the CDU and SPD or it will proceed to new elections–prolonging its governmental paralysis. Given the gutting of Germany’s military forces by its own government, no wonder the rightist political party, the AfD, did so well in the last election. I think it may be true that America’s deer hunters now dramatically outgun the German army.

I realize that some readers of this blog come from Christian denominations which, in the past, have thought that Germany will lead some super-militaristic “United States of Europe” in imposing a new “beast” system on Europe and the world during the latter days. If Germany has designs to dominate Europe, it will have to conquer the continent via the briefcase-toting EU bureaucrats in Brussels, not via tanks and warplanes.

For all intents and purposes, Germany is a disarmed nation.