GERMANY’S MERKEL: NATION STATES MUST “GIVE UP THEIR SOVEREIGNTY” 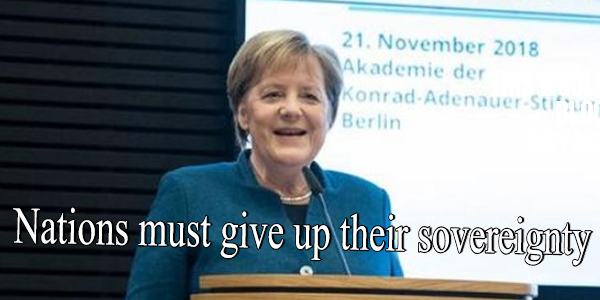 If there was ever any doubt about the agenda of Germany’s Angela Merkel, she has now made it crystal clear what her agenda for Europe really is. Her vision of Europe’s future should worry every person who loves freedom and liberty.

In a recent speech, Merkel stated that nation-states must “give up their sovereignty” (first link). She also added that national leaders “must not listen to the will of their citizens” on important matters. The link alludes to Adolf Hitler as it reports about Merkel’s “dark speech” offering her concept for the future for Europe. Her dictatorial, anti-democratic approach to the future of Europe ought to scare every peace-loving and freedom-loving person in Europe’s nations. Her statement is tantamount to calling for European nation states to simply cease to exist in favor of a supernational, globalist government. Her stark and open advocacy for a domineering European super-government sounds ominous to me. The last time a German leader was so open and stark about the need for Europe’s nations to relinquish their sovereignty to a German leader’s wishes, it led to World War II. Merkel’s dictatorial demands are so breathtakingly candid that they deserve a very candid analysis.

Her totalitarian utterances must have sent chills through many of the new nation states all across Eastern Europe who have enjoyed a reassertion of their own independence and nationalistic culture only since 1990 when the Soviet Union disintegrated and the iron hand of Communism was removed from their nations. Her call for all the leaders of European nations to surrender their national sovereignties to a new globalist “Fuhrer” entity might have many European cabinets meeting secretly to determine if the United Kingdom had the right idea to leave the EU before the EU became even more tyrannical. Indeed, Merkel’s brazen advocacy of ending the national sovereignties of Europe’s nations was so stark I wonder if she either (A) actually thinks Europe’s nations and peoples are ready for a new “iron boot” to be placed on their necks, or (B) her loose lips were a result of too many alcoholic drinks before her speech. At least the globalist, autocratic urges that are within her heart were honestly stated for all to see. It is inherent in any call for nations in Europe to “give up their sovereignty” that she is also calling for all EU nations to transfer control of their respective military forces to a centralized German-dominated, EU authority. That ought to scare anyone who knows the history of the 20th century.

Merkel’s fellow globalist leader, President Macron of France, has also stated his intentions for the future of Europe. The first link cites Macron as saying “patriotism is the exact opposite of nationalism [because] nationalism is treason.” Wow! Is this ever a classic example of Orwellian double-speak. It is a classic example of “calling evil good and good evil.” Europe’s two globalist leaders sound a lot alike in their totalitarian, condescending, haughty approach to the people and nations of Europe. Macron is in deep political trouble within his own nation and his approval rating among French voters was down in the low 20s the last I noticed. The revolt of the “yellow vests” on many consecutive weekends in French cities shows the depth of the French electorate’s disgust with Macron’s agenda and with Macron himself. If the next French election were being held soon, Macron’s chance of being re-elected would be essentially zero. I wonder what Charles de Gaulle would think of Macron’s assertion that modern Frenchmen who were patriotic and nationalist in behalf of the French nation were committing “treason?”

Consider to whom Merkel wants the nations of Europe to yield their national sovereignties. Her statement indicates that she wants all of them to become subject peoples to the EU’s unelected bureaucrats and EU leaders who are not elected by Europe’s citizens but rather chosen by Europe’s globalist elites. When one looks at the EU’s organizational structure, it is clear it was structured so the EU leaders would never have to face a vote of the European citizenry or be accountable to them. The second link makes it clear Merkel wants the nations of Europe to meekly surrender to the rule of the EU leaders. Merkel has bluntly told the elected leaders of Europe’s nations to surrender governance of their nations to new EU bosses appointed by Merkel, Macron and their fellow globalists.  Can you think of any other way her bluntly anti-democratic demands could be implemented? The second link also mentions Merkel’s “Marxist” history as growing up in Communist East Germany and being a Deputy Spokesperson for the final East Germany government before it merged into West Germany and became today’s united Germany. The fact that her roots were in a totalitarian nation bother me more now that she has made such a brazen call for the surrender of all European national sovereignties to an all-powerful centralized EU. Her totalitarian roots are showing.

The second link observes that Merkel “drove Britain out of the EU,” and that she “alienated” Hungary, Poland, the Czech Republic, Slovakia and Austria against a centralized EU. You could add Italy to that list as Merkel’s demands that immigrants be allowed to pour into Europe also resulted in a Euro-skeptic government being elected in that nation.  Sweden also had a Euro-skeptic party win enough seats in the most recent Swedish election that that nation still has been unable to form a new government as of this writing. Germany and France also have growing anti-immigrant, Euro-skeptic parties. The rightist party in Germany, the Alternative for Germany (AfD) is often labeled by the globalists as a right-wing danger to the nation. However, after reading about Merkel’s shockingly totalitarian demands upon the nations of Europe, I’d say the real danger of resurgent fascism in Germany lies with Merkel herself. Macron, who states that it is “treason” to be patriotic to one’s own nation, is her fellow-traveler in this dangerous philosophy. Macron sounds “out of touch” not only with his own French voters but also with reality itself.

Given the growing threats to national sovereignty and personal liberties now posed by Merkel, Macron and the EU, I’m glad I don’t live in Europe right now.