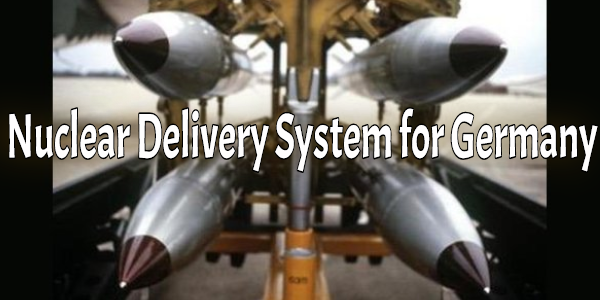 In what may sound like a surprise to many readers of this blog and to people around the world, there is a report that Germany wants to acquire nuclear bombers. This may sound quite odd since Germany does not make or have any nuclear weapons, but the first link and second link report that some German leaders consider Germany to be a nuclear power already “because it has vectors to use them [nuclear weapons].” That is a contorted phrase which will be explained shortly. Germany reportedly also wants to “share” the permanent seat occupied by France on the UN Security Council and “represent the EU under the auspices of NATO.” This is more very contorted language.

The first two links have the same content, but I like to cite at least two sources which are reporting the same story before commenting on it on my blog. Let’s consider the second example of contorted language first. To begin with, the UN is called the United Nations, not the United Alliances. The EU is not a nation and never has been one. NATO is also not a nation and has never been one. If a trading/customs union like the EU or a military alliance like NATO can be represented as a “nation” at the UN, then all similar such global trading/military alliances can theoretically argue that they can have a seat at the UN too. Will the Trans-Pacific Partnership also ask for a seat at the UN as well? How about the Organization of American States? Can the strategic alliances of Russia with China, Iran, Belarus, Syria, etc. also get seats at the UN? How about OPEC? The logic of either the EU or NATO having their own “seats” at the UN breaks down very fast when it is examined in context. Will France be happy to share its seat as a Permanent Member of the UN Security Council with Germany? Is Germany and Angela Merkel going to tell France: “Move over Macron, we are going to take control of your Permanent Seat at the Security Council for half the time.” I doubt France or Macron is thrilled at this German proposal if the report is true. Also, Germany cannot simply seize a Permanent Seat on the Security Council because it wants to do so–the other UN members would have to debate and decide such a matter. Indeed, Also, Germany is a very weak military power. India, Pakistan, Israel, and Japan have far more military power on the world scene than Germany and therefore have a much greater claim to a seat on the Security Council than Germany. The UN has periodically considered expanding the Permanent Seats on the UN Security Council, but the competition for nations wanting those seats would be fierce. Also, I think the current Permanent Members of the Security Council (The USA, Russia, China, the United Kingdom, and France) would have veto power over any such changes.

The third link offers a good analysis of this unusual German proposal. It reports that some German leaders doubt whether Germany is still under the USA’s nuclear umbrella due to some of President Trump’s comments. However, Trump made those comments about NATO because so many NATO nations, especially Germany, have been refusing to spend meaningful and pledged amounts of their national budgets on NATO defense spending. The state of Germany’s military is quite pathetic, as previous posts at this website have noted. The third link cites one German observer’s assessment of Germany’s military status as: “Nothing flies, nothing floats and nothing runs.” The link reports the shocking fact that of Germany’s’ front-line warplanes, only four are in operating condition.  No wonder Trump expressed doubts about Germany’s commitment to NATO! The link also points out that even in the highly unlikely event that the USA forsook NATO, Germany still is under the protective nuclear umbrellas of the United Kingdom and France within NATO. It’s just a suggestion, of course, but maybe Germany ought to import some qualified engineers and mechanics from other NATO nations who actually know how to fix warships, warplanes, and tanks. Evidence that the USA is not forsaking NATO is abundant. Trump’s challenge to NATO nations to boost their military spending has caused many nations to take their military defense needs and obligations more seriously. Poland and Romania are hosting new American Aegis Ashore air defense systems which can intercept missiles or warplanes, and Poland has even offered to fund the building of a new military base for the stationing of American military forces on Polish soil on a permanent basis (topics also discussed in previous posts). Germany better, have a lot more than four working warplanes before it tries to apply to obtain any permanent seat on the UN Security Council.

Now let’s discuss the other contorted claim by some in Germany that it is already a nuclear power because it has “vectors to use them.” What is this fuzzy language addressing? The answer is in the fourth link. As part of NATO’s longstanding war-fighting strategy in the event of a war with Russia,  NATO had contingency plans to allow several NATO nations to deliver American nuclear weapons on the warplanes of other NATO nations if the logistical needs required such action. The known list of non-nuclear NATO nations allowed to deliver US nuclear weapons if the contingency arose includes Belgium, Germany, Italy, the Netherlands, and Turkey, according to the fourth link. I suspect this list dates to a time when NATO had a far smaller roster of member nations. This program is called “nuclear sharing,” and the USA has to approve each nation allowed to share nuclear weapons delivery responsibilities during wartime conditions. It would seem that this list needs revision to reflect modern realities. A chart at the fourth link reports that there are 50-90 nuclear weapons stored in Turkey (presumably at the large US military base at Incirlik). Given that Turkey seems determined to buy a sophisticated Russian air defense system (designed to shoot down NATO planes) and given the growing doubts about whether Turkey will remain in NATO, Turkey likely needs to be removed from the nuclear sharing list. Also, since Germany has almost no functioning warplanes left in its inventory to deliver nuclear weapons, Germany could be dropped from the list as well. Italy and the Netherlands still make sense, but Belgium seems to be a wholly-owned subsidiary of the EU since the EU is based in Brussels. Perhaps such nations as Poland and Norway ought to be considered for the nuclear-sharing program.

Both the EU and NATO, are in a state of unease at present. When and if the UK actually leaves the EU and if Turkey leaves NATO, both the EU and NATO are going to face pressures to restructure. As nationalist/populist political parties grow in strength in the EU nations, more nations may leave the EU if the EU’s bureaucracy continues to become steadily more autocratic and opposed to traditional western cultural/religious values. If a major recession hits Europe or the entire world, expect nationalist/populist parties in Europe to surge in strength.

The Bible’s latter-day prophecies may come into greater focus as events cause realignments in Europe’s power structures and alliances. The EU is a major pillar of the global financial/commercial system–which is called Babylon the Great in Revelation 13, and 17-18. It is vital to realize the Bible prophesies that the current global power structure called Babylon the Great is going to be overthrown by a cryptic alliance called the “seven heads and ten horns” who will institute a new global power structure which is prophetically called the “beast” system–which will, in turn, be overthrown by Jesus Christ’s heavenly army after 42 months (Revelation 13:1-5 and 19:11-20:4). There are many students of prophecy which identify the various stages of the Holy Roman Empire as resurrections of the old Roman Empire, and this seems like a valid interpretation to me. This would make Europe a major focal point for the fulfillment of biblical prophecies. Long-time readers know that I do not ‘”set dates” for major prophetic events to occur (those that do invariably end up with egg on the faces), so I will wait to let events unfold on God’s timetable to reveal the full meaning of latter-day prophecies. However, I think students of Bible prophecy do need to keep their eyes on Europe. The status quo there could change rapidly in our foreseeable future. For more information germane to this topic, please read my free articles, Are We Living in the Biblical Latter Days?, Is Babylon the Great about to Fall…Ushering in a New Beast System? and The Babylonian Origin of the Modern Banking System.

My thanks to a reader for drawing this subject to my attention.

[POST SCRIPT COMMENT: While I rarely mention it in my blog, my website is funded entirely by reader donations. My website receives no funding from any church denomination or organization or any groups of any kind. I have lived on a disability pension since I was injured on the job in the early 1980s. My website is on the internet due to the generous support of the donors who I must thank publicly for their stalwart support. If you value the analysis, information, and perspectives offered at this website, please consider making a donation to help support this website. Those who donate $30 or more in a month receive a special benefit. At the conclusion of each month, such donors receive the Bonus Links via email. These Bonus Links contain additional information about the website and informational links and commentary that is not offered to the general public at the website. If you desire to make a donation, you can do so via the donation button at the bottom of my website’s homepage.]