German-Turkish Rift Worsens as Turkey Drifts Away from NATO 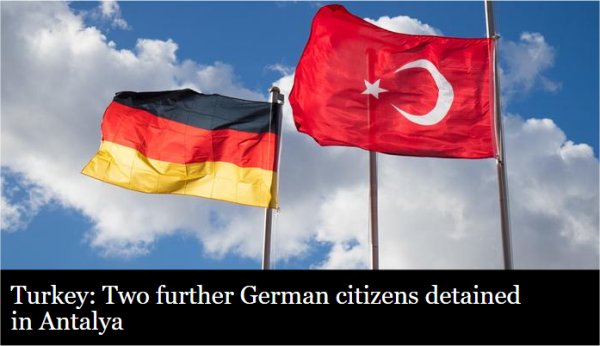 American media reports are now understandably dominated by coverage of the catastrophic aftermath of Hurricane Harvey’s damage to Texas and Louisiana, but an escalating political “hurricane” has also been hitting the NATO alliance with very little US media coverage.

This escalating crisis has been Turkey’s gradual embrace of NATO’s traditional rivals and a very nasty spat which has been worsening between Germany and Turkey–both NATO “allies.” Turkey has been arresting an increasing number of German citizens and some of these arrests appear to be for political purposes only. The crisis worsened when Turkey arrested two more German citizens in the last few days. Angela Merkel, Germany’s Chancellor, reacted angrily to this even as she is currently running for re-election in the upcoming German national elections. Her rivals are reacting even more angrily against Turkey. Germany has essentially declared that it will essentially veto Turkey from ever joining the EU unless Turkey mends its ways, which angers Turkey. The first link and second link give the background and details of this German-Turkish crisis. A report on Deutsche Welle indicated that Merkel’s political rivals in the German election want even tougher actions against Germany, including possibly banning Germans from visiting Turkey. This would be a very real blow to Turkey’s economy which depends heavily on European tourists. Indeed, if Turkey continues to arrest Germans inside Turkey, the entire EU may take tough actions against Turkey.

Turkey is not repentant. Indeed, it escalated the war of words vs. Germany. The third link describes Turkish President Erdogan’s recent attempt to influence the German election by urging the large Turkish community inside Germany to not vote for Merkel’s party or other large German political parties. [Note to US political insiders trying to find any examples of Russian influence in the 2016 US election: What Erdogan did is an example of actual meddling in a foreign election. President Obama did this same kind of meddling in a foreign election when he openly urged British voters to vote for the Remain side in the Brexit vote.] Turkey further insulted Germany by stating that Germany is not strong enough to scare Turkey (fourth link). That sounds almost like “fighting words.”

Turkey has also alienated another NATO member: the USA. When Erdogan visited the USA not long ago, his guards violently attacked a group of non-violent protestors. In a previous post, I included a video clip of this assault. The fifth link reports that the US recently indicted a number of Erdogan’s Turkish guards and/or staffers for this attack. The sixth link shows a portion of that attack. I expect little or nothing will come of this indictment as those Turkish guards are not likely to return to US soil where they could be taken into custody

All of the above developments indicate that Turkey is drifting away from the NATO alliance. The final two links argue that Turkey is more than just drifting away from NATO. It is taking specific actions to ally itself with NATO’s likely enemies. Turkey is signing up to buy an advanced Russian S-400 air defense system, which was designed to shoot down US and NATO warplanes and missiles (seventh link). Why would Turkey buy such a system so designed if it intended to stay in NATO?? The final link reports on Turkish moves to draw   Iran. Iran is the foremost Shiite Islamic power in the world and is, therefore, an enemy of Saudi Arabia, Egypt, Jordan and other Sunni Islamic nations aligned with the Western and NATO nations. Turkey is taking actions which not only alienate it from its traditional NATO allies, but also alienate it from its traditional Sunni allies as well. In a world full of confusing and conflicting loyalties and actions among nations, Turkey’s actions are among the more confusing ones that can be cited. If Turkey does pull out of NATO (or has to be marginalized due to its actions), it will force European nations to dramatically increase military spending. If Turkey drifts closer to Iran, it will concomitantly push the Sunni Islamic nations further in the direction of an alliance with Israel.

Turkey’s drift away from its NATO and Sunni allies and toward Russia and Iran have biblical as well as geopolitical implications. Turkey has a very strategic location astride the Bosporus and Dardanelles which, in NATO’s control, bottles up Russian warships inside the Black Sea. If Turkey leaves NATO, Russia’s warships will have free access to the Mediterranean Sea. These potential developments could affect how the global alliances prophesied in Ezekiel 38-39 shape up for the end of our age. Most major nations are already in or close to being in either the Gog-Magog alliance led by Russia, China and Iran or the alliance led by the latter day nations of the house of Israel (the USA, the UK and most NATO nations). Turkey is a nation which is not specifically mentioned in that prophecy, so it could potentially move into either alliance. Turkey’s recent election showed an almost 50-50 split amongst its electorate whether to support or reject Erdogan’s leadership. Will Erdogan stay in power and move Turkey to abandon its traditional allies or will Turkey revert to its normal place among the world’s alliance, either through a change-of-heart by Erdogan or a regime change? The answer to that question is not known, but it will greatly help the military position of the Gog-Magog alliance if Turkey chooses Russia and Iran over its former Western and Sunni allies.

For more information on how biblical prophecies are being implemented in modern geopolitics, please read my articles, What Ezekiel 38-39 Reveal about a Future World War III, The USA in Bible Prophecy, and Are We Living in the Biblical Latter Days?