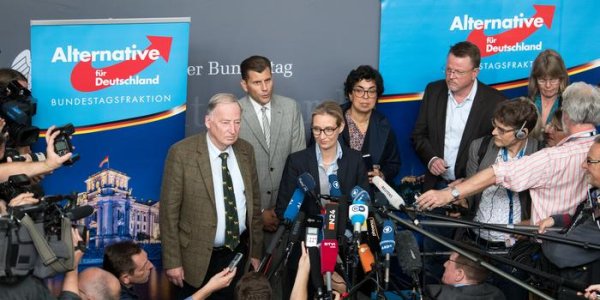 Months after Germany held its national elections, that nation still has no new government. Negotiations (as of this writing) to form a governing coalition have so far failed–leaving Chancellor Merkel leading a weak caretaker government for now. Efforts to form a governing coalition including Merkel’s CDU/CSU alliance, the Green Party and the Free Democrats failed, and Merkel’s current effort is to re-build the previous governing coalition of her CDU/CSU party and the Social Democrat Party (SPD). After the last election in which the SPD did very badly after being a partner in the governing coalition with Merkel’s party, many SPD party members wanted no part of any coalition with the CDU/CSU. However, the prospects of having to conduct a new election have forced it to at least consider re-joining a governing coalition with the CDU/CSU. There are some huge problems with this possibility as this post will discuss. Also, this post will update readers on new developments that are threatening to tear the EU apart. Allow me to offer some background information on Germany’s political landscape.

Besides the opposition of many rank-and-file members of the SPD to joining Merkel’s party as a junior partner in a governing coalition, there is a complicating factor to that possibility. No one expected the Alternative for Germany (AfD) party to win third place in the recent German national elections. If the two top parties (the CDU/CSU and the SPD) form a coalition, the AfD will be the main opposition party in Germany’s parliament. In Germany, the largest opposition party usually has certain privileges (first link) and all the old-line German parties are aghast at this happening as the AfD is a rightist party which is openly anti-Islamic immigration and wants to protect traditional German culture. The AfD has upset the long-standing electoral math in the German parliament by winning over 90 seats in that body when they previously held none. The AfD is an eclectic mix of anti-EU and anti-immigrant voters, German traditionalists and even some tinged by neo-Nazi backgrounds. Many would prefer to have the establishment SPD be the main opposition party, but without a governing coalition, new elections will be necessary.

Another huge problem for Merkel may be brewing. While Merkel heads the CDU/CSU party, a potential fracture of that alliance is looming. The CSU is the Bavarian wing of the party and it tends to be more conservative than the national CDU party. The CSU has demanded that any new Merkel government include hard limits on the numbers of immigrants admitted into Germany while the SPD has the opposite view. The CSU has even threatened to bolt its traditional coalition with the CDU if their demand is not met. This puts the CSU in an anti-EU position on this issue while the SPD is strongly pro-EU. Indeed, the SPD is so pro-EU that its leader wants a “United States of Europe” with the EU governing the European nations. A major event has occurred which indicates the CSU may be ready to bolt Merkel’s coalition. Without the CSU as part of a grand coalition with the SPD, the CDU will not have enough members in Parliament to form a coalition with then SPD.

At its Bavarian party convention, guess who the CSU invited to be an honored guest at the meeting? They invited Prime Minister Viktor Orban of Hungary to be their guest–which surely raised political eyebrows all over Germany (second link). Orban is one of the most fervently anti-Islamic immigrant and anti-EU leaders of any of the nations within the EU. He regularly refuses to implement the EU’s autocratic diktats, and has announced he will veto any EU effort to deprive Poland of its voting privileges in the EU (as discussed in a previous post).  I think the CSU has just sent a none-to-subtle message to Merkel that if she forms a coalition with the pro-immigrant, pro-EU SPD party, the CSU will bolt the coalition and it will become a party with positions similar to those of Viktor Orban. This has made Merkel’s efforts to form a coalition much more difficult.

In updates about how other events are threatening to tear the EU apart, the control-freak EU bureaucrats in Brussels are suing Poland, The Czech Republic and Hungary over their failure to implement the decrees of the unaccountable EU bureaucrats (third link). Poland and Hungary have plainly taken the position that the EU’s immigration policies have failed and they will not follow them (fourth link). The third link has a very informative chart showing how many immigrants have been accepted by EU nations via the EU’s “requirements.” Poland and Hungary have accepted zero immigrants. The Czech Republic has accepted only 12 immigrants. Austria and Slovakia have accepted only 15 and 16, respectively. Austria is not likely to accept any more as its voters have elected a staunchly conservative, anti-immigrant governing coalition. However, that chart shows that the United Kingdom and Denmark have also accepted zero immigrants. Why aren’t they being “sued” for not accepting the EU’s demanded number of immigrants? It is easy to understand why the UK isn’t being sued as they are leaving the EU soon. But Denmark has taken the same position on this issue as Poland and Hungary. Why did the EU give Denmark a pass?

Another development threatening the EU’s cohesion is the recent fall of the pro-EU Italian government. New elections have been set for March 4th (fifth link). A poll indicates the pro-EU party that headed the last government is falling hard in the polls (sixth link). It has only 22.8% in the latest poll while the “anti-establishment” Five Star party has 29%. Three rightist parties combine for over 32% of the electorate while leftist parties have almost no support. If the Five Star party wins the election and unites with two or three of the rightist parties, Italy may have a new government that is unfriendly toward the EU. This would be a huge threat to the survival of the EU itself. I suspect that Italy’s current policy of taking in huge numbers of immigrants coming from North Africa to Italy in small boats has caused many Italian voters to react with anger at that policy. I urge readers to closely watch for the Italian election results; I know I will.

The Bible states in Amos 3:3: “Can two walk together, except they be agreed?” This truism argues that the EU, as presently constituted, cannot survive. It is being torn apart by many issues. Economic/tax/debt issues have divided the EU on a north-south basis. Cultural/religious issues have divided the EU on an east-west basis. Immigration policy differences are causing fractures all over the EU. Liberal governments are shocked that the electorate in many EU nations is turning to new anti-EU, anti-immigrant governments. The clueless EU bureaucrats continue to offend European nations with dictatorial attitudes and actions. The United Kingdom is already in the process of leaving the EU. If pushed much harder, Poland and Hungary may be the next to leave. If Italy elects an anti-immigrant, anti-EU governing coalition, the survival of the EU will be in dire danger. With the UK leaving the EU and with Germany and Italy now having weak caretaker governments, only France and the Benelux nations form a strong, pro-EU core.

Many students of biblical prophecies expect that Europe will be a key locus for the fulfillments of a variety of biblical prophecies (the emergence of the beast and false prophet, a final resurrection of the Holy Roman Empire, etc.). A sundering of the EU could also be the trigger that fulfills the prophecy in Revelation 17-18 about the fall of the global “Babylon the Great” system. If the EU comes apart, how will the Euro currency survive? If the Euro collapses, it could tear apart confidence in the world’s fiat currencies and cause a rapid collapse of the massive derivatives markets due to cascading counter-party risk failures. Prophecies may be fulfilled in a way that no one expects. These events should be followed closely.

Biblical prophecies could be fulfilled very quickly and catch the world by surprise. I hope readers of this blog will not be surprised. For an in-depth examination of this and related topics, please read my free articles: Is Babylon the Great about to Fall Fall…Ushering in a New Beast System?, The Babylonian Origin of the Modern Banking System?, Are We Living in the Biblical Latter Days? and Should Christians Prepare for Future Hard Times?