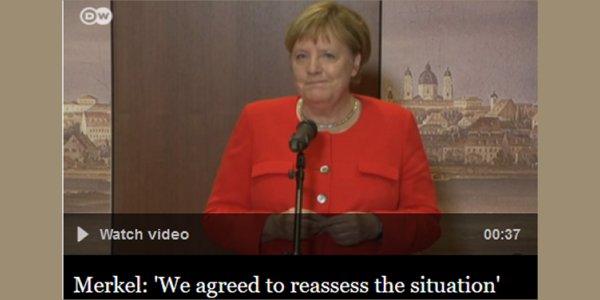 The governing German government coalition is becoming steadily more precarious. As many readers realize, the Fall 2017 elections produced a stalemate among the competing parties which resulted in an approximate six-month delay in forming a new government. The losing Social Democrats (the SDP) had pledged that they would refuse to join the CDU/CSU parties led by Chancellor Angela Merkel in another governing coalition. However, in order to form any government at all, they reneged on their pledge and joined the CDU/CSU in another coalition government. This led to the ouster of the SPD governing party leader and internal strife within the SPD. This coalition had muddled on through 2018 until another coalition crisis has emerged. After the stabbing death of a German citizen at the hands of two individuals from Islamic nations, major protests and counter-protests were triggered in the city of Chemnitz, Germany where it occurred. The head of internal security for the German government made a statement that was taken by some as siding with those who protested the stabbing. This event infuriated the leftist SPD.

A crisis emerged which threatened the survival of the German government’s coalition. The leftist SPD demanded his removal from his office and the rightist CSU wing of the governing coalition defended him. Chancellor Merkel faced major pressures. The left might have left the coalition if the minister of internal security stayed in his position, but she risked the alienation of the CSU faction of her own party coalition if she fired him. A most unusual compromise solution was reached:  The minister of internal security was removed from his office, but he was promoted to a higher government position. The details of this governing crisis are given in reports from the German media (first link and second link). The German governing coalition was in in a very tenuous position even before this latest crisis, as the third link from the British media reports. The ad-hoc resolution of this governing crisis has not proved satisfactory to some so it may not be resolved yet.

The German governing coalition can be likened to two people trapped in a very bad marriage. They are incompatible partners and want out of the arrangement, but are stuck with each other due to external circumstances. What are the external circumstances holding this governing coalition together? Both are afraid that if they dissolve their coalition and new elections are called, the rightist Alternative for Germany (AfD) party will gain an even greater share of the popular vote and it will be almost impossible for any governing coalition to be formed without that party–which the other parties have sworn to never allow into a governing coalition. Notice the results of the latest German national poll found in the second link. It shows the share of the national vote for Merkel’s CDU/CSU parties has fallen to 28%–its lowest polling result ever. Its governing coalition partner, the SPD, is at 17% and is slowly losing popular support and has even fallen behind the AfD party, which has risen to 18%–the second-highest total of any political party in Germany. Other parties have lesser shares of the vote, but the leftist Greens are also slowly rising in support at 15%. The fourth link explains the makeup of each party’s share of the seats in the current German Parliament. The German Parliament is large, having 702 seats.  The upstart AfD party had zero seats in the previous parliament but had enough support to have 92 seats in the current parliament. While percentages in polls do not perfectly translate into seats in the next parliament, an 18% level of support for the AfD in current polls indicates it could have 126 seats in the next parliament if and when a new election is held. With the CDU/CSU-SPD coalition steadily losing support, they may not be able to muster a majority in any new parliament to form a government even if they wanted to do so. This would result in a situation where either the AfD would have to join a new coalition or Merkel would have to ally herself with a range of leftist parties to form a government–which could so alienate her CSU partners that they would bolt any new coalition effort. A true stalemate could occur in which Germany might have a weak caretaker government for a prolonged period of time. Therefore, the “bad marriage” between the CDU/CSU and the SPD continues. Some leaders on the left are trying to create a grand coalition of leftist parties to seek power, but so far it is not gaining much traction (fifth link).

The teetering German government has major consequences for the entire EU. Germany’s Merkel and France’s Macron had mutual plans for an agenda of actions to transform the EU into more of a supranational government ruling over the other European nations as if they were lesser children in the European family of nations. With Merkel hanging on to power by a thread, this agenda cannot move forward. So, with Germany in a situation where a prolonged condition of weak or caretaker governments loom indefinitely into the future, nationalist/populist parties are assuming power in nations like Austria, Poland, Hungary, The Czech Republic and Italy and strong nationalist/populist parties are emerging in many other nations (including Germany and France). The United Kingdom, in its Brexit vote, has already seceded from the EU and a “hard Brexit” in March 2018 looks increasingly more likely. If this happens, a crisis in Europe will result as EU nations will need to form bi-lateral trade and travel arrangements with the UK while the UK’s parliament is not likely to appropriate any further money from the British Exchequer to the EU budget. This would create a huge hole in the EU budget. Either throngs of EU bureaucrats will need to be laid off or the EU’s taxes on EU nations will need to rise substantially.  That alone could trigger more European nations to leave the EU as has the UK.

Many Christians who follow prophecy closely watch what is happening in Europe and especially what happens inside Germany. I urge readers to watch European events closely as well. Germany faces a prolonged time of governmental uncertainty. Ironically, it is Chancellor Merkel’s own policy of allowing a tidal wave of Islamic and African immigrants to come into Germany and Europe which has created a powerful backlash against her and the EU all across Europe. In past posts, I have noted that the growing schisms and fractures inside the EU could lead to a break-up of the EU and a global financial/political crisis if the Euro currency cannot survive in its current form. So many global financial, banking, trade, and derivative deals are denominated in the Euro currency that all of them could be called into doubt if the EU and the Euro cannot survive in its current form. Revelation 17-18 prophesies that a global financial/political crisis will occur in the latter days of our age which will unfold in “one hour” (Revelation 18:10, 17 and 19). This phrase can be literally fulfilled in our modern time due to digital technology. All global financial and monetary markets are digitally interlinked so closely that a collapse or crisis in one of them could easily spread to all global markets within one hour. This situation bears close watching. For a closer examination of the biblical connections to modern events, please read my free articles: Is Babylon the Great about to Fall…Ushering in a New Beast System?, The Babylonian Origin of the Modern Banking System, and Are We Living in the Biblical Latter Days?

One last thought. the record of the last century indicates that the German people can turn to a strong leader to solve the nation’s problems in the event of severe or prolonged domestic disorder and crisis. If this happens again in Germany’s future, it will likely quickly rearrange the map of Europe. Some nations may be comfortable with a dominant Germany with a “strong leader” to solve the nation’s problems unilaterally, but other nations, remembering the extreme suffering of Europe in the two world wars will likely want no part of any such arrangement. The map of Europe and the alignment of its alliances could change quickly if such a situation occurs. I’m not specifically predicting such an outcome, but I am pointing out this is now a possibility. I think this possibility is why the governing coalition in Germany is still barely holding together–they fear the same possible unfolding of events which could follow a new German election.