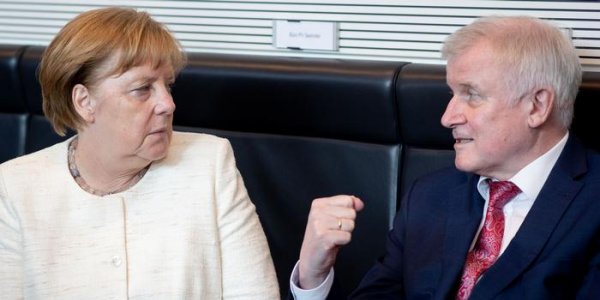 While the American media is focused almost entirely on the political soap operas inside the beltway in Washington, DC, very important events are occurring in other locations around the world. A huge story is unfolding inside Germany and it has major implications for the EU, all European nations and the entire global political/financial order. Indeed, the German government almost collapsed a few days ago, and it may only have a few weeks to survive if events transpire in the direction which now seems almost inevitable. Did the American media you follow report on this huge event inside Europe?

The first four links (1, 2, 3, 4) offer details about the crisis which has erupted inside Germany’s tenuous governing coalition. Readers are referred to those links for full details, but I will offer a summary of what is occurring in my following comments. The current governing coalition led by Chancellor Angela Merkel is very tenuous and barely came together at all. It includes the Bavarian conservative CSU which is  anti-immigrant, mostly Catholic and increasingly Euro-skeptic, Merkel’s CDU which is very secular, pro-EU and pro-immigration, and the SPD, which is very leftist, pro-immigration and pro-EU. The CSU’s former party leader, Horst Seehofer, is now Germany’s Interior Minister with authority over border/immigration issues in this coalition government. Seehofer, increasingly restive under Merkel’s policies, has threatened to tear the coalition apart unless Germany acts to stop its policy of letting in seemingly endless waves of immigrants. He has given Merkel what amounts to an ultimatum: Either adopt a policy limiting immigration, or he will act to impose a solution to it on his own, acting via his authority as Interior Minister. This is anathema to Merkel and Merkel’s policies are anathema to Seehofer and the CSU. Complicating all this is the fact that Seehofer’s CSU party, which dominates Bavaria, is facing an election in Bavaria this fall, and it is very concerned that the new German Rightist party, the AfD, will make inroads into the CSU’s dominant position within that State.

Seehofer’s intents are two-fold. His party truly wants to stop the illegal immigration into Germany which threatens German culture and values, but he also needs to adopt firmly conservative positions to help him politically in the Bavarian state election. If Seehofer unilaterally imposes anti-immigration policies on Germany’s borders, it is expected that Merkel will fire him from his position. This will result in the CSU leaving the coalition government which almost surely means new elections will need to be held. If this happens, the AfD is expected to increase its parliamentary position to over 100 seats and it may be very hard to form a governing coalition without them. Doing so is anathema to some of the German political parties. Seehofer did agree to defer his insurrection for a few weeks to allow Merkel time to attend an EU summit at the end of June to see if the EU will agree to a new policy limiting immigration into EU nations that is acceptable to the CSU party. If such an agreement does not occur, the German government faces collapse if all parties adhere to their current positions.

If a new election occurs, the AfD is expected to increase its share of the vote, as the polls cite in the fifth link document. The sixth link reports the results of the internal Bavarian state elections which indicate that the AfD might become the second-largest party in the Bavarian state parliament. Seehofer also has risks in this showdown with Merkel. He has “talked tough,” but if he does not produce tough results on immigration, his Bavarian voters could easily swing even more strongly toward the AfD.

It is by no means certain that the EU can develop an immigration policy that is acceptable to the rightist nations demanding immigration reforms and the leftist governments wanting to preserve the status quo. Indeed, the Visegrad 4 nations (Hungary, Poland, the Czech Republic and Slovakia) may not even attend the EU conference and may opt for their own nationalist solution to their border issues (seventh link). Italy has turned nationalist and Euro-skeptic, Spain’s dependably pro-EU government has fallen due to corruption issues, Austria is allied to the Visegrad 4 nations and the other EU nations are hardly speaking with one voice on the immigration issue. If Germany has to hold elections and the splintered outcome results in a situation where Germany cannot form a new coalition government for some time, France’s Macron may be the only notable European leader favoring a strong EU central government. Without Merkel governing Germany, the EU’s proponents will be severely weakened. For that reason, there is a chance that the pending EU summit will result in a revision to the immigration situation which will sufficiently appease Seehofer and his CSU party. However, if Seehofer yields too much, Bavaria’s voters may surge more heavily to the AfD party.

It is increasingly more evident that the factions favoring or opposing loose immigration and central EU controls are drifting further and further apart as time passes. Under the principle of Amos 3:3 that asks the question: “Can two walk together except they be agreed?,” it does seem evident that the EU cannot stay together as currently organized. When/if the EU disintegrates and Europe’s nations rearrange themselves into new alliances, the Eurozone will face a global crisis in the viability of its Euro currency. If a bloc of European nations leave the Euro bloc and revert to their former national currencies, the nations will have to decide which percentage of the Euro’s assets and debts each nation will inherit under a new arrangement. Some nations may decide to simply renege on Euro-denominated debts. Such a crisis could create a sudden “flash crash” which could spread globally and freeze financial markets all over the world. Because all global markets are now so interconnected digitally, a sudden freeze inside the Euro markets could paralyze other global markets due to counterparty risks of all kinds. Revelation 17-18 prophesies that a major global financial/monetary crisis would occur during the latter days of our age that will lead to a global collapse of monetary markets within “one hour” (Revelation 18:10, 17 and 19). This prophecy could not possibly have been fulfilled until our modern digitally-interconnected world. Now that prophecy can be literally fulfilled, which should make people realize just how relevant the Bible is to modern geopolitics.

We are living at a time when the current age of mankind’s existence and activities on earth will be coming to an end. Few see it coming. When the current global system collapses, it will be replaced by a new global system that will be put into power by a cryptic alliance of “seven heads and ten horns” (Revelation 17). Their new “beast” system will govern for only 42 months (Revelation 13:1-5) before it too is destroyed by a final world power. That final world power will be the government of Jesus Christ and his resurrected saints (Revelation 19:11-20:4), which will rule for a 1000 year utopian period of time on earth during which no human being will be allowed to be in any position of power for that 1000 years. We truly live in momentous times, and very few realize how these times will unfold and conclude. If you understand the Bible’s prophecies, you can know much regarding how it will unfold.

For more information on the above subjects, please read my free articles: Are We Living in the Biblical Latter Days?, Is Babylon the Great about to Fall…Ushering in a New Beast System? and The Babylonian Origin of the Modern Baking System. The third article explains clearly why the book of Revelation calls the current global political/financial/monetary system by the name “Babylon the Great.”

Keep your eye on Germany and the EU. What happens there is very important to how world events will unfold.

I’d like to thank a reader for sending me one of these links.