German Election Paralysis a Risk to the EU Itself 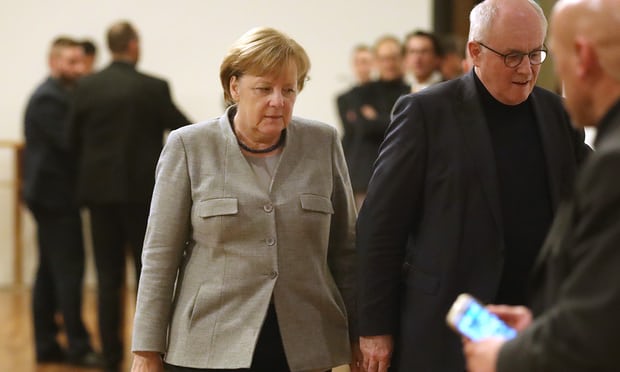 A very significant event has occurred in Germany which has major ramifications for Europe and all nations in the western world. However, relatively little is being mentioned about its importance in the mainstream American media. The major event is that the German elections held weeks ago have failed to produce a new German government, leaving the nation paralyzed at the top. Because Germany is clearly the dominant force within the EU, this also means that the EU will be effectively leaderless and politically hobbled for the duration of the German governmental crisis.

The first link, second link and third link describe the process whereby the negotiations to form a new German government failed, ushering in a period of confusion at the top in Germany. Unlike here in the USA with two dominant political parties, nations with parliamentary elections require negotiations to form a new government by creating a coalition of enough parties to create a majority in a newly-elected elected parliament. Europe-watchers expected Germany’s parliamentary negotiations to produce another government led by longtime Chancellor Angela Merkel, but the multi-party talks completely broke down and there seems at present to be no way to re-start the negotiations. The third link includes a good graphic illustrating the relative strengths of the various German parties. It now appears that Merkel’s decision to open the borders of Europe to a flood of Islamic immigrants (who have no desire to assimilate into their host nations’ culture) has led to her own downfall. Some polls cited on the Internet show that Merkel’s popularity has been sinking and one recently released poll shows a majority of her own party doesn’t want her to lead the party in the next round of elections. Other articles I’ve seen mention that there are arcane German parliamentary deadlines and procedures which must be followed in order to hold any new election, which may not happen for weeks or months. If the new election results in a similar “hung jury” verdict, then the German political chaos could go on for a long time. This means the paralysis within the EU could go on just as long, and the EU could experience internal confusion and chaos with no strong leader or government in Germany. There is a mention in the first three links that there was an important Summit Meeting of all EU national leaders and Merkel was so distracted by internal traumas inside Germany that she couldn’t attend the meeting of the EU which she has dominated. The “empty chair” representing Germany at such a top-flite EU meeting would have spoken volumes to all other European nations about the leaderless state of the EU at present.

The rancor and blame-placing for this outcome is growing more acrimonious inside German political circles. The fourth link relates that arguments have broken out between ministers inside Merkel’s own government. I watched a Deutsche Welle segment on American PBS which showed that the heads of the parliamentary parties were openly blaming each other for the situation in a rancorous manner in full view of the German public. The longer this rancor lasts inside German governing classes, the longer it is likely to last as hard feelings will only fester and grow.

This also bodes very ill for the EU’s aggressive agenda re: EU-wide changes to consolidate power in the unelected EU Commission, forming an EU defense force, shaping new environmental, trade and immigration policies, etc. The consensus of articles I’ve read is that the big losers in the election besides Merkel and her ruling party are the EU itself and French President, Emmanuel Macron, who had wanted to partner with  Merkel to push an aggressive EU centralization agenda upon a perhaps less-than-willing collection of European nations. The fifth link details some of this information. I’ve also included an introduction to a very good Wall Street Journal article on the subject (sixth link). I cannot provide the entire article as it has subscribers-only access. I have a copy of the print version and will offer a few cogent quotes from it for readers to consider. The article is entitled “German Turmoil Threatens Europe,” and it observes that the chaos inside Germany is evidence of the “growing fragmentation of Europe’s political landscape” which is now “casting doubt on Berlin’s ability to shape change on the continent.”  Besides immigration issues, the article also cites “festering discontent with technological governing elites” as a reason for the resurgent nationalism that is now spreading across Germany and the EU and creating electoral upheavals. I urge readers to go to a library and read the entire article (and its companion articles) if you can do so.

I’ve also included the seventh link as an indicator that sentiment inside Germany and the governing elites of Germany and the EU are apparently very anti-American. In a blistering statement which I thought was very revealing, Merkel’s former German Defense Minister openly called for the American military forces to be effectively kicked out of the big Ramstein military base inside Germany. I think this surprising statement may be an indicator of the strong anti-American attitudes that have developed inside Germany and the EU, and that the German-led efforts to create an EU military force may be an effort to shift the command of military forces in Europe from NATO (which is dominated by the USA) to the EU (which is dominated by Germany). A lot of national governments inside the EU likely recall World War II and have no desire to allow Germany (or anyone else ) to create a German-dominated EU military force which can impose, perhaps at the point of a gun, the will of the unelected, unaccountable-to-the people EU elites on all European peoples.

These developments bear close watching for all of us who view world events through the prism of biblical prophecy. As I’ve long noted in many posts, the Bible’s prophecy in Revelation 17-18 foretells that the global ruling power structure will experience a very hard fall from power when their hold over the finances, politics, monetary matters and commerce of the world collapses suddenly in our latter day period of prophetic time. Revelation 18:3 reveals that there is a globalist cabal of ruling insider elites in both governmental and corporate locations have been enriching themselves at the expense of the rest of the world. Revelation 17 calls this ruling globalist group of insiders “Babylon the Great” or “The Great Whore,” and adds that the successful revolt against its domination of the world will be led by a cryptic “seven heads and ten horns.” The insider elites will perhaps be dethroned with extreme prejudice as Revelation 17:16 prophesies that Babylon the Great’s power structures will be hated by the seven heads and ten horns and that they will make the ruling insiders’ power structures to be made desolate and burned with fire. Their fall will be permanent.

The suddenness of Babylon the Great’s fall as prophesied in Revelation 18 will amaze the world and the entire global merchant class when it occurs. Revelation 18:10, 17 and 19 prophesy the fall will occur in “one hour” which is now literally possible due to the way global financial and monetary markets are all digitally connected. A cascading failure in perhaps the Euro futures market could cause chaos and collapse within minutes in all global exchanges. This is especially true because a massive overhang of global derivatives makes the underlying markets very vulnerable to a collapse in all derivatives due to counter-party risks. If the EU fractures in the time ahead of us and more nations follow the United Kingdom in leaving the EU, it will erode the tax base and underpinning of the EU which supports the Euro currency. People in other blocs should not rejoice at this impending financial calamity. In a global financial/monetary collapse, the world’s fiat currencies may all collapse along with a host of global financial and banking entities. It will not be tidy and those of on this side of the Atlantic will share the fate of the global elites’ collapse prophesied in Revelation 17-18. Indeed, this prophesied global collapse could very well start in the USA and in American markets and exchanges. I’m not predicting the collapse will begin in Europe, as the Bible itself does not reveal where or how the collapse will be triggered. However, the more unstable Germany and the EU become, the more likely it becomes that the EU as we know it will not survive. If the EU does not survive in its current state, how can the Euro currency survive? If the Euro starts to topple, it would guarantee a global financial crisis.

This we do know: The global collapse prophesied in Revelation 17-18 will occur on God’s timetable when he wants it to occur. The context of Revelation 17-18 indicates that the global collapse will occur so suddenly that “no one will see it coming.” Revelation 18:11-15 indicates that while the merchants of the earth will have a lot of goods and services to sell after the collapse, “no man buys their merchandise any more.” This situation would apply globally if no one is able to buy anything because the world’s people have lost faith in their money systems and there is a crisis in what constitutes a reliable medium of financial exchange. The period of chaos (the length of which is not revealed in the Bible) will end when the seven heads and ten horns create a new global power structure prophetically called the “beast” which will impose its own new global financial system (Revelation 13:15-18).

There have been a series of events indicating the global insider elites are now losing their hold on power. It began with the British Brexit vote, then it continued when Donald Trump defeated Hillary Clinton for the presidency of the USA. Another major event has been the reawakening of nationalism all across Europe due to the invasion of European nations by Islamic immigrants–who bring an alien religious/cultural presence into Europe as well as terrorist and criminal acts. The sudden paralysis of Germany’s government just as Germany was on the cusp of trying to transform the EU into a European government controlled by the insider elites–not the voters–is also a signal that the power of the globalist elites is steadily eroding. Eventually it will collapse entirely, as Revelation 17-18 prophesies. I do not predict when that will occur. As I mentioned above, that is up to God. If you would like to read an in-depth analysis of how Revelation 17-18 applies to our modern world and global political/financial realities, please read my articles, Is Babylon the Great about to Fall…Ushering in a New Beast System? and The Babylonian Origin of the Modern Banking System. I suggest you will benefit from reading these articles as you will see that the Bible’s prophecies are far more relevant to modern times than most people imagine. The prophecies in Revelation 17-18 were almost fulfilled in 2008 when we were told by government leaders that the global financial system came within hours of systemic collapse. None of the underlying crises that caused the 2008 panic have been solved, meaning…

We are living on borrowed time.