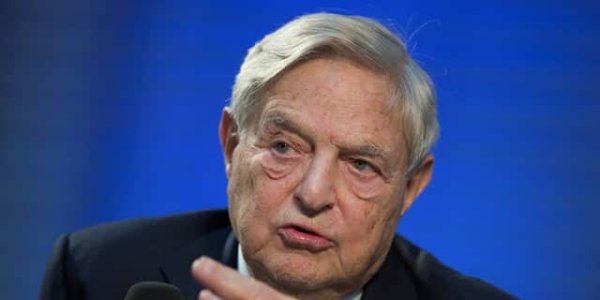 Americans may not realize it but there is a well-financed and orchestrated effort to overturn the United Kingdom’s Brexit vote result. This effort to overturn the will of the British people to leave the EU is being heavily-funded by George Soros, the well-known global financier who funds Leftist/Globalist causes. The revelation that Mr. Soros funded an effort to reverse the UK’s Brexit vote has understandably created a major controversy inside the UK. Mr. Soros gave the British equivalent of $550,000 to fund this effort to undo the Brexit vote results via clever legal or political maneuvers.

The three links below detail this major story from the UK, and the third link offers a detailed report about the governmental and non-governmental actors involved in this political drama. Since the Brexit vote, there have been lawsuits and court cases filed in the UK by the angered Remain losers to try and overturn the Brexit vote. All have been unsuccessful. However, the globalists do not want nations to assert their national sovereign rights and they have not given up on an effort to find some way to keep the UK inside the EU’s supranational jurisdiction. The globalists must really be in a panic-mode to keep trying to reverse the result of elections on both sides of the Atlantic Ocean. The globalist Left assumed that they were in full control of world events not long ago and they were sure the Brexit vote would fail and that Hillary Clinton would be essentially “coronated” as president in the 2016 US presidential election. In each case, the globalist Left was shocked that their plans for a global government under their aegis went awry. In both the UK and the USA, the globalist Left has been trying to reverse the outcomes of these two public elections by either trumped-up political or legal means (pun in this sentence intended).

So far, the efforts of the globalist Left to undo the votes of the electorates in the UK and USA have been unsuccessful, but they keep trying to do so. I think the reason they are doing so is that in order for their globalist plans to succeed, they must “bring to heel” the USA and UK to their supranational institutions. I must admit  my concerns that the third link’s detailed account of the current players inside Prime Minister Theresa May’s UK’s government reveals that some of them are very much in sympathy with the agenda of Mr. Soros to sabotage the results of the British Brexit vote. Mrs. May herself was a part of the Remain side in the Brexit vote campaign which wanted to keep the UK under the authority of the EU and its many supranational agencies and courts. I always thought it quite odd that Mrs. May, a member of the losing Remain camp, was named to head the new British government which would negotiate the terms of the British Brexit process. This allows for the possibility that Mrs. May has no intention of leading the UK out of the EU no matter what her public statements may be. In a recent post, I noted that the British Parliament had voted to give itself the final say on any Brexit deal that is negotiated with the EU. May’s government vigorously opposed the effort in the House of Commons to give Parliament the right to vote to give final approval to whatever deal was negotiated by the May government. Why would she oppose such a vote unless she wanted to impose her own will on the British nation via her EU negotiating team? Personally, I think they ought to let Nigel Farage do the negotiating for the British side in the Brexit negotiations. He would get the best deal that reasserted British sovereignty over its own internal and external affairs–something the globalist Left doesn’t want to occur.

The globalist media will likely be screaming that “there has to be a deal” as the deadline for the UK leaving the EU approaches in early 2019. Actually, there does not “have to be” such a deal. If there is no deal, then the UK leaves the EU “in toto,” which would leave the UK entirely free of the jurisdiction of all EU agencies, courts, trade deals, etc. It would be messy as it would almost surely require the UK to negotiate trade deals with each individual EU nation. I think you can see why the globalist Left does not want this to occur. Such an outcome would require each of the remaining nations inside the EU to begin to assert its own national sovereignty as they negotiated nation-to-nation deals with the UK. The EU could quickly lose control of things. For example, the German automakers sell lots of cars inside the UK. They will want to continue to do so and will pressure their own government to make sure that they can do so without serious interruptions. Every European corporation and industry group which sells goods and services inside the UK will pressure their governments to quickly “do a deal” with the UK so they don’t lose out on access to the British markets. If there are any meaningful delays in EU corporations getting access to the UK’s internal markets, they will find that the export-driven nations of the Pacific Rim will be eager to fill the void. Also, the US private sector which has been revitalized under President Trump will aggressively take over trade and commerce relationships inside the UK if EU corporations are absent for very long. If the EU’s corporations dawdle in negotiating trade agreements with the UK, then nations such as the USA, Canada, Australia, New Zealand, Japan, India, etc. will be the beneficiaries. Do you see why the globalists are fighting so hard to prevent a firm British exit from the EU?

It is my view that we are entering the time when the power of the current globalist Left is waning steadily. Revelation 17-18 prophecy that in the latter days of our age, a globalist alliance between private and public sector insiders (Revelation 18:3), called “Babylon the Great,” will experience a catastrophic collapse when they are overthrown by a rival global alliance headed by a cryptic “seven heads and ten horns” (Revelation 17:9-18 and 13:1-5). This overthrow sounds like it will be implemented with great prejudice (Revelation 17:16) to make sure that Babylon the Great’s institutions and leaders cannot possibly make a come-back. If we are truly in this prophetic period of time, then it is God’s will that it happen, and nothing can counter or reverse the Divine will of the Creator God who gave this prophecy approximately 1900 years ago.

It is also significant that while many nations inside the EU are now asserting strong nationalist intentions, the “opening shot” of the rebellion vs. the globalist Left was in the British Brexit vote followed quickly by the shocking election result in the USA. Why would the rebellion vs. the globalist Left begin in the UK and the USA? Those who have read my books or listened to my free audio messages realize that the British and American nations constitute the Israelite tribes of Ephraim and Manasseh, the leading tribes of the ten tribes of Israel and the divinely-appointed heirs of the “birthright” promise which God gave to Abraham, Isaac and Jacob (Genesis 17:5-7 and 19, 22:15-18, 26:3-5, 48:8-49:33). It is my view that the globalist Left has been, knowingly or unknowingly, trying to steal the birthright blessings from Ephraim and Manasseh (as well as the entire ten tribes of Israel) and give it to non-Israelite nations and to those who hate the descendants of Abraham, Isaac and Jacob. Genesis 49:22-26 declares that the latter days (Genesis 49:1) would be a time when the tribes of Joseph (Ephraim and Manasseh) would be given an outpouring of the birthright blessings (even though they would be hated and opposed by other nations and groups). It can easily be proven that the modern nations of Ephraim (the British peoples) and the USA (the Americans) are the birthright tribes of Ephraim and Manasseh, respectively. I believe that God is intervening in world events to forcibly impose his will over the wishes of the globalist (Babylon the Great) Left in the affairs of modern mankind.

I have referred to a number of biblical themes in the above piece. For detailed documentation of this piece’s assertions and identifications, please read my articles: Are We Living in the Biblical Latter Days?, Is Babylon the Great about to Fall…Ushering in a New Beast System?, The Babylonian Origin of the Modern Banking System, and The United States in Biblical Prophecy.