Further Internal Strife Within the EU 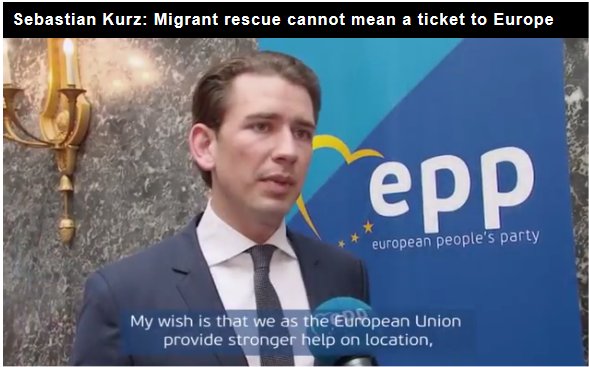 The EU continues to experience growing internal stresses and divisions due to the rapid influx of Islamic immigrants in recent years and other issues pitting nationalists vs. globalists. These divisions are growing more intense and could lead to more nations leaving the EU as it is currently structured. This post offers updates on at least three matters opening up schisms within the EU.

The first link details the upcoming Austrian election and the possibility that a rightist governing coalition could emerge from its outcome. If this happens, expect Austria to join the list of nations that will oppose the diktats of the unelected EU bureaucrats in Brussels. The second link documents how severe the conflict is becoming between Germany’s Chancellor Angela Merkel (who seems to be the voice of the EU nowadays) and Hungary’s Prime Minister Viktor Orban. Hungary and other nations of the Visegrad Four (Hungary, the Czech Republic, Slovakia and Poland) have no intention of accepting “their assigned share” of the Islamic immigrants that the EU allowed into the EU’s borders. This has escalated into such a political civil war within the EU that Merkel is threatening to have Hungary expelled from the EU. If Germany throws its political weight around to punish Hungary and the other Visegrad Four nations, those four nations may all leave the EU. The third link has very interesting information about the personal background of Prime Minister Orban and why Hungary refuses to accept the Islamic refugees who refuse to embrace the values of western civilization. If the Austrian election results in a governing rightist coalition, the Visegrad Four may soon become the Visegrad Five. Poland has also been threatened with expulsion from the EU so this “rebel” group is starting to coalesce.

It is worth noting that the forces of nationalism and devolution of power to local governments is a strong trend within Europe, and this runs counter to the desires of the globalist forces governing the EU. Czechoslovakia split into two nations (The Czech Republic and Slovakia) in a peaceful manner. Yugoslavia split into seven nations (Slovenia, Croatia, Serbia, Macedonia, Bosnia, Kosovo and Montenegro) in a very violent and bloody manner in several ethnic cleansing wars. Now Catalonia wants to split from Spain. We’ll have to see if it does become independent, but the wishes of Catalonia and Spain seem impossible to reconcile. The United Kingdom voted to leave the EU, and Scotland has had a strong independence movement (which was weakened substantially in the recent British election). Paradoxically, the more Germany and the globalist forces autocratically impose their demands upon the nations of Europe, the more “push back” they are receiving. The Netherlands and France have strong anti-immigrant, anti-EU political parties and the recent German election witnessed Merkel’s own party being dramatically weakened within Germany and a rightist party entering the Bundestag for the first time since World War II.

Americans are taught so little history in our schools, but Europeans will likely recall that Austria and Hungary were once joined together in the Austro-Hungarian Empire which was a major force in Europe before World War I so these two nations do have a common bond from the past. It should also be noted that the nations within the Visegrad Four plus Austria share a common religious bond as well. These nations have a strong Roman Catholic tradition, and their loyalty to that heritage makes them cultural rivals to the humanist/secular forces that dominate the globalist EU.

Many Christians expect a major role for Europe in the fulfillments of the biblical prophecies about the latter days, and I tend to have that same expectation. I do not claim to know how events will unfold, but it seems evident that the forces now within Europe to either split the EU into different groupings or restructure it in a major way are now becoming dominant.