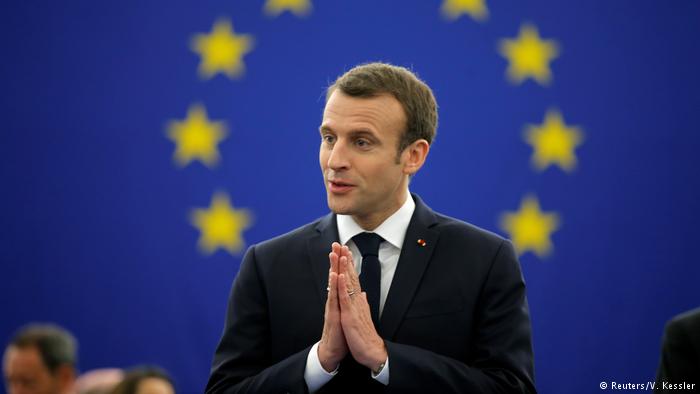 The French President, Emmanuel Macron, addressed the EU Parliament just days ago and gave an impassioned speech that the European nations should reject “nationalism” and embrace the “democracy” of the  EU. The first link, from the German media, states that Macron “sharply criticized the rise of authoritarian governments and the dismantling of democracy in Eastern Europe.” The second link, from the Canadian media, and the third link, from the British media, largely echo these same themes that Macron stressed in his vision of the EU’s future.

Macron is a very pro-EU national leader who, in my opinion, wants a strong central EU government and weaker individual member states who “do what they are told” by the EU government. Macron’s choice of words, again, in my opinion, has European realities exactly backward. Macron thinks the “nationalism” of individual European nations can be countered by the “democracy” of the EU. However, the EU is not a democracy. It has an elected EU Parliament, but the real power lies with the European Commission, which is neither elected by nor is accountable to the voters of Europe. The EU Parliament has a limited role to play in the selection of EU Commissioners, who are essentially chosen by the insiders within the European elites. The European Commissioners are also expected to put the interests of the EU ahead of the interests of their home nations (fourth link). Macron also failed to note that it was the autocratic and dictatorial policies of the EU which let millions of (mostly Islamic) immigrants into Europe against the will of the European citizenry, and that it was the high-handed diktats of the EU administrators who all but “ordered” each member state to accept whatever percentage of these immigrants that Brussels demanded they take. It was the glaring lack of any democracy in the EU on this matter which has led many European nations to rebel against the EU. The EU gave them no choice. Individual European nations had to put the interests and safety of their own citizens ahead of the globalist demands of the EU’s bureaucrats. Indeed, it is the direct election of nationalist governments, in member EU nations, which is an example of democracy (direct elections) in action. Macron and the EU globalists seem stunned at the wave of nationalist outcomes in recent elections. Not only did the United Kingdom secede from the EU in its Brexit vote, but nationalist leaders have been elected in Poland, Austria, Hungary and, most recently, in Italy. The Visegrad Four (Poland, Hungary, the Czech Republic and Slovakia) have staunchly asserted their national interests must be put before the EU’s demands. The creation of the Three Seas Initiative, a sub-caucus of Eastern European nations, has also threatened the rulership of the EU’s elites. The Italian election resulted in Euro-skeptic, anti-immigrant parties winning a landslide victory over the pro-EU parties, but the negotiators for the winning parties have yet to negotiate the terms of a coalition government before a new Italian leader formally takes office.

All these factors argue that Macron’s call for greater power to be given to an [unelected] EU central government is likely to not be well-accepted by the voters of the individual European nations. The first link’s analysis accurately observes that German Chancellor Merkel, who would ordinarily be expected to be a firm ally of Macron’s positions, is walking a delicate tightrope in trying to keep her fragile governing coalition together. Indeed, if Merkel veers too far to the left in a pro-EU, pro-immigrant position, she risks the conservative CSU party walking out of the coalition. On the other hand, if she adopts conservative positions, the leftist SPD party will bolt the governing coalition. All these parties are likely barely holding together in the German governing coalition only due to fears that any new elections will give an even stronger hand to the rightist AfD party, which is ascendant due to its anti-EU and anti-immigrant positions. Macron himself cannot take his own position for granted. He is currently embroiled in a bitter dispute with France’s powerful unions, and if the unions choose to ally themselves with Marine Le Pen, the leader of France’s National Front party, Macron could be out of a job after the next French election. Le Pen is fiercely anti-EU and her views that the EU will “die” are expressed in the fifth link. One of the chief architects of the British Brexit vote, Nigel Farage, is asked in the final link which nations he thinks will be the next to leave the EU. His answer: Italy and Greece.

Emmanuel Macron is very passionate about his vision for the future of Europe, but he is a leading figure in what is becoming a “dialogue of the deaf” inside Europe. The electorates of Europe are increasingly alienated by the condescension of the EU’s leaders and are no longer listening to them. Clearly, the EU’s elites and Macron are not listening to the European voters in the member nations. This adds to the fractures inside the EU and these fractures are going to boil over in some future day when the EU either disintegrates or is re-formed along new membership lines. When this happens, it will force a global political/financial crisis. The Euro currency itself may not survive as it is now structured. These crises could lead to a fulfillment of the prophecy in Revelation 17-18 that the global political/financial system in the latter days which is structured to benefit the insider elites (Revelation 18:2-3) will itself experience a catastrophic collapse. To put it in modern media terms, Revelation 17-18 foretell the fall of the global “Deep State” in the latter days of our current age. Its fall will not be accidental. A cryptic alliance of “seven heads and ten horns” (Revelation 17:9-16) will coordinate their actions to overthrow the current global system (called “Babylon the Great” in Revelation 17-18). For an in-depth analysis of the Bible’s prophecies in light of modern global geopolitics, please read my articles, Is Babylon the Great about to Fall…Ushering in a New “Beast” System?, and The Babylonian Origin of the Modern Banking System.