FOOD SCARCITIES IN OUR FUTURE? 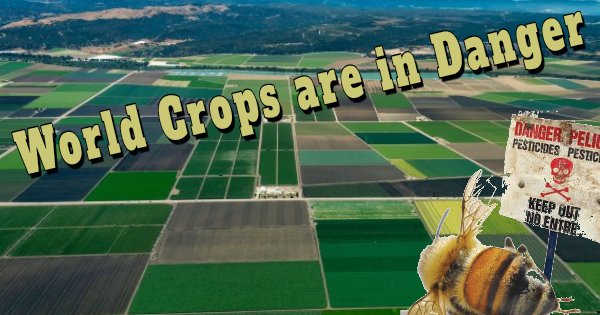 This post is to update readers on a very worrisome trend which endangers the food supplies of the world. The problem has been known about for many years, but nations and the agribusiness community are still ignoring it on a global scale. However, a point will come where mankind’s supply of food will begin to drop precipitously because of this unaddressed problem. This threat to our global food supplies is the massive bee die-off which is not only continuing but appears to also be accelerating in scope.

Honey bees and other pollinators are critically important to the world’s food supplies. The first link, from the BBC, reports that one-third of mankind’s food supply is dependent on pollinator species like the scarcely-noticed honey bee. That link also reports that in Brazil, an estimated 500,000,000 honeybees have been killed in just three months due to the overuse of pesticides. This problem is global, and it is a global problem due to the overuse of chemicals and other systemic causes all over the planet. Mass bee die-offs are also being reported in Russia, Canada, Mexico, Argentina, and South Africa. The link reports 40% of all bee colonies died last winter in the USA, the “worse year on record.” [I urge readers to re-read that previous sentence and let it sink in.] The second link offers more details on the massive die-off of bees in the USA, and it shows a map of the American states depicting how bad the bee die-off is in each state. The states where bee die-offs are the highest are Arizona, Louisiana, Tennessee, Virginia, Illinois, Ohio, and the New England states. Three states where bees are apparently staying healthy are Colorado, Nebraska, and Florida. I urge American readers to check the map in the second link to see how your state fares in the health of its bee population. Varieties of mites which can affect bees are sometimes blamed as a factor in the bee die-offs but it would appear that the bee die-offs are heavily caused by chemicals and pesticides and other factors. The EU has banned certain types of chemicals in order to preserve their bees and their overall food supplies (first link). I commend that action by the EU.

Bees are not the only plant pollinators. Other types of insects also act as pollinators for food crops. However, many types of insect populations are also experiencing mass die-offs. The third link and fourth link offer detailed documentation about how insect populations are rapidly declining around the world. The third link states that 75-98% of insect biomass” has already died off, and the fourth link asserts 82% of insect biomass has died off in the last 33 years. The studies most specifically addressed insect species in Germany, Puerto Rico, and the United Kingdom. Causes given for these precipitous declines in insect populations include intensive agriculture, pesticide and fertilizer usage, urbanization, deforestation, etc. With insects also dying off in alarming numbers, it means that as time passes, there are, steadily fewer bee and insect pollinators to produce the fruits and vegetables mankind needs to survive.

There are indications that the supplies of canned goods in the USA are already beginning to be in short supply. The fifth link offers photographs of store signs in US grocery store chains that inform consumers that canned goods are in short supply due to poor harvests. You may not have seen these signs on grocery store shelves in your area, but clearly, some parts of the USA are already experiencing shortages in certain types of canned goods. As mankind continues to kill off bees and insects, we can expect the food shortages to steadily grow worse due to a shortage of pollinators. We are faced with an ultimate truism: It doesn’t matter how many acres of crops you plant–if you don’t have pollinators, you will not have a crop.

One nation is apparently noticing the developing food shortage issue. China, which along with India has the world’s largest national population, is reportedly stockpiling food, gold, and other commodity supplies for its population. The article in the sixth link notes that even though China is reducing its importation of American agricultural commodities due to the trade war, it is dramatically increasing its food imports from Russia and other locations. With its huge population, China can ill-afford the political instability that a food crisis in their nation could cause. Therefore, it makes sense for China to plan ahead and “hoard” food now while they can obtain it. Most nations are simply ignoring the problem.

As a personal testimony to how bee, insect and wildlife populations have dramatically dropped in the last half-century, I can recall growing up as a boy in South Dakota prior to the era of intensive chemical farming. There used to be bees and insect swarms of all kinds throughout the warm months of the year. Huge numbers of pheasants and various “critters” (gophers, field mice, skunks, deer, raccoons, etc.) could be seen continually running across rural roads ahead of cars as one drove through the farming regions.  Birds were everywhere. Now one rarely sees a honey bee, and insect numbers have plummeted. “Critter” populations have radically dropped for many species. Bird numbers are also greatly reduced from what they once were (which is logical as chemicals, drops in insect population and loss of habitat due to “fence-row to fence-row” planting programs all reduce bird populations). Pheasants are a rare sight now. Some bird species which used to be ubiquitous (meadowlarks and kingbirds, for instance) have crashed. Throughout the natural world, mankind’s short-term pursuit of profits, are killing off the species of the natural world. What mankind fails to appreciate is that by killing off the humble pollinators a time is going to come when mankind’s supply of vegetables and fruits will plummet, causing either famines or food shortages.

Both famines and food shortages are prophesied in the Bible to occur during the “latter days” of our current age. Jesus Christ prophesied that famines will characterize the latter days (Matthew 24:7) and Revelation 6:5-6 prophesy that general food shortages will also occur at the end of our age. The wording of Revelation 6:5 indicates that food shortages will cause rationing by price (and perhaps by governmental fiat). Some categories of food which we now take for granted may become rare treats in the future or may even be impossible to find in any store. When I was younger, I used to think that biblical prophecies would be fulfilled by divine plagues upon sinning mankind. While that is still entirely possible, it is now also evident that mankind’s own short-sighted stupidity can cause some of the prophesied woes to occur in our latter-day period of time. The Creator God originally created our planet to be a harmonious place where mankind, animals, birds, insects and the land all co-existed in mutually-dependent harmony. Mankind is steadily wrecking this delicate balance. Adam and Eve, our first parents, were instructed to “dress and keep” the Garden of Eden (Genesis 2:15). In other words, they were to care for it to preserve the balance of the earth and its species. Modern mankind is especially failing at obeying this divine charge. God sees all that is happening and someday there will be a Judgment Day. When that Judgment Day does arrive, one aspect of that eventual judgment will be that God will “destroy them which destroy the earth” (Revelation 11:18). There are many who are leaving, a wrecked, earth and ecosystem behind them in their heedless pursuit of short-term profits. When Judgment Day comes, those people will receive the judgments and punishments they have earned for themselves.

For abundant evidence that we are living in the biblical “latter days,” please read my free article, Are We Living in the Biblical Latter Days? For biblical advice on how to prepare for hard times such as those caused by food shortages, I urge you to read my free article, Should Christians Prepare for Future Hard Times? While the latter article was originally written years ago to a Christian audience, it contains much information that would benefit Christians and non-Christians alike. I urge readers to make common-sense preparations now while there is time to do so. Biblical prophecies and the scientific community are warning that we are heading for a time when there will not be enough food for the billions of people now living on the earth. When that time comes, you do not want to be one of the persons or families, who failed, to make advance common-sense preparations.