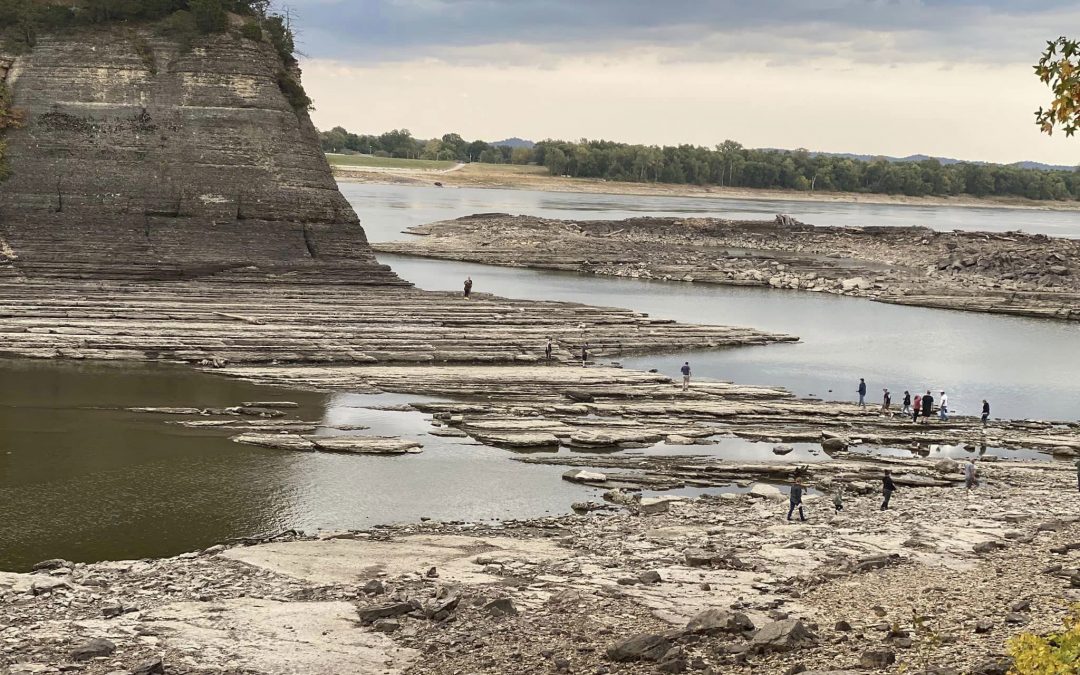 Two new factors are emerging which pose severe threats to the food and energy supply chains which are already stretched to the limit. If these two new factors continue to deteriorate, the supply chains for food and energy in the USA (and the world) could reach the breaking point. The first link and second link document that the Mississippi River’s depth is now so shallow that there is a very real danger that barge traffic on the Mississippi River may come to a halt along much of its length. This crisis is due to the severe and chronic drought which has gripped much of the American West, Southwest and Midwest. The tributaries flowing into the Mississippi River have shrunk to such a point that the Mighty Mississippi may have insufficient water to transport a host of products and bulk goods from the interior of the USA to New Orleans where international merchant ships would normally load and unload all kinds of cargoes. As the links indicate, the Army Corps of Engineers is dredging continuously to try to keep open a narrowing spot on the Mississippi River so barge traffic can continue. If water levels keep dropping, it will mean that barges will soon be unable to carry full loads down the river because full loads will result in barges being grounded on shoals and river bottoms.

If the Mississippi River has to shut down barge traffic (which is inevitable if the severe drought continues), the food and energy crisis gripping the USA and the world will take a giant step toward a much worse crisis. It is now harvest season for crops and foodstuffs all across the Midwest and Plains states, and the agriculture industry relies on barge traffic to transport bulk shipments of corn, wheat, soybeans, etc. to New Orleans for shipment on merchant ships to the world. If there is no available barge traffic on the Mississippi River, food costs will rise rapidly as barge shipment is the cheapest way to transport bulk shipments. Energy costs would rise too as a shut-down of the Mississippi River’s barge traffic would mean little or no coal could be transported  by barges to power companies, refineries, etc. which need those shipments to provide energy to all of America.

Obviously, if the Mississippi River barge traffic shuts down, energy and food costs will skyrocket throughout the USA and the world. As the links below make evident, much of the world’s food supplies go via the barges floating down the Mississippi River. The war in Ukraine is already creating a food scarcity problem in the world, as the fourth link reveals. As part of its war against Ukraine, Russia shut down grain shipments from Ukrainian ports to the rest of the world via the Black Sea. An agreement has been in effect which allowed at least a portion of Ukrainian wheat to be shipped to world markets, but Russia has now announced it may not renew this agreement. Even if Russia does allow some shipments through, much Ukrainian grain traffic is being blocked by Russia as well over 100 ships are reportedly waiting at Ukrainian ports to be loaded. If Ukrainian grains are mostly blocked from being shipped at the same time American grains cannot be shipped to the world due to the lowering levels of the Mississippi River, much of the world will start going hungry. Europe is already facing a severe energy shortage this winter due to no Russian energy reaching European nations. If shipments of coal and fossil fuels cannot reach Europe from US ports, the USA will be unable to pick up some of the lack of energy supplies which Europe is now facing. Worsening global shortages of food and energy mean inflation will rise to much higher levels than we are now experiencing.

Some might say, “Let’s just use trucks to bring grain, coal, etc. to New Orleans if barge traffic isn’t available on the Mississippi River.” To begin with, transporting bulk grain or other types of products via trucks is far more expensive than barge shipment even in normal times. We do not live in normal times. The fifth link and sixth link report that the nation now has only a 25 day supply of diesel fuel, which trucks need to transport cargoes. If trucks are used to ship vast amounts of bulk cargoes which usually go to American ports via barges, America’s supply of diesel fuel will be exhausted very quickly. If that happens, nothing will get transported to America’s stores and shopping centers. Can you imagine what will happen in urban areas if trucks cannot transport food supplies to inner cities due to diesel fuel shortages? Food riots and crime could quickly get so bad that the National Guard and army will be needed to escort trucks carrying vital supplies of food and energy supplies to the cities of America. The Biden administration will quickly become exceedingly unpopular if Americans cannot get adequate food supplies and nothing happens when people turn on electric switches and furnaces this winter. It does appear that the USA faces a severe crisis in food and energy supplies that is becoming almost inevitable. There is no meaningful rain in our local forecasts for as far as the forecasts can see, and that is true for much of the Western USA. If this mega-drought continues, wild fires could become epic in coming months.

The Bible warns that nations which abandon God’s laws and flout their disobedience will experience national punishments. One of those punishments is severe drought (Deuteronomy 28:22-24). Let’s ask the question: Is America openly disobeying God and flouting its disobedience? The answer is an obvious “yes.” If The God of the Bible is the real Creator of the Universe (he is) and the Bible is his Word (it is), then the USA should expect the severe drought will continue and worsen until the USA (and the world) begin to show signs of national repentance. Has any governor or mayor called on people to pray for national forgiveness and a renewal of normal rainfall? I don’t know of any who have done so. It would be shocking if anyone in the Biden administration called on people to repent and ask God for rain. If no national repentance occurs, expect the food and energy crisis to get relentlessly worse. Food shortages (“famines”) are prophesied in Matthew 24:6-7 for the latter days, and Revelation 6:5-6 foretell that food supplies will become so low that food will be rationed by price in the latter days. I hope that you have made preparations for a time of shortages in all kinds of essential supplies and products. Such a time appears to now be staring us in the face. If the Mississippi River continues to drop and we really do have a shrinking diesel fuel supply (just 25 days now), it won’t be long till major supply chains start to break. If you hear on the News that America’s truck shipments are stopping due to fuel shortages, you can be prepared for all hell to break loose.