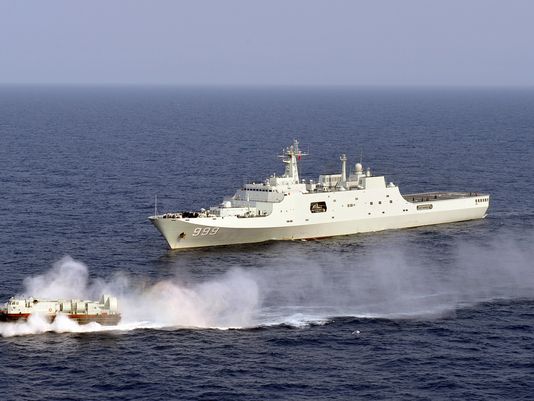 These first link and second link report that five Chinese warships passed through US territorial waters off the coast of Alaskan islands recently. They entered US sovereign waters on the way back from military exercises with the Russian navy in the Arctic Sea. The Obama administration reacted as if nothing out of the ordinary had happened–even though this was the first known time that Chinese warships entered US waters. The viewpoints accredited to the US government about this incident practically have the Obama administration apologizing for the Chinese actions as if they were “no big deal.” My viewpoint is not so sanguine.

My previous post mentioned the five Chinese warships passing near the Alaskan coast, but at that point it was not known that China’s warships would actually enter US territorial waters. This is a far more provocative act than having the ships take a route from the Arctic ocean to their Chinese home ports that would have had them pass through Russian or international waters. They could have avoided US waters altogether, but deliberately chose not to do so. They chose to sail through US territorial waters. I think they did so to test the reaction of the Obama administration. If so, China must be pleased the Obama administration’s reaction was so timid about the incident.

Let’s ask several questions about this matter. The five Chinese warships obviously sailed from China to the Arctic Sea before returning home after the exercise. Did they sail through US territorial waters on the way north to the Arctic Ocean, or did they avoid US waters on the northward leg of their journey? If they avoided US waters on the way north, then their entrance into US waters was intentional, deliberate and unnecessary. That they did so while Obama was personally in Alaska on a visit was an especially “in your face” action by the Chinese to Obama and the USA.

The first article states “the Chinese warships “did not pose a threat and operated within international norms when passing through US waters.” Hmm. Did they request permission to enter US sovereign maritime space before passing through them? If they did not, then this isn’t so “normal” after all. The media is silent on whether they requested advance permission. Since this is not discussed, I think it can be concluded that they did not request any permission.

If passing through another nation’s sovereign waters is so “normal,” I have a suggestion. The next time the US has joint naval maneuvers with either Japan or South Korea, let’s have five US warships sail to Vietnam and Singapore on a good-will tour and port-of-call for the ships’ crews. However, let’s have the five US warships sail to their destinations by passing through the Strait of Taiwan and sailing within 12 miles of the Chinese coast and do so without requesting any advance permission. Let’s try to pick a time when we know the Chinese premier will be visiting that particular maritime province of China. Let’s see how “normal” China thinks such a move is when the shoe is on the other foot. I don’t think “normal” is how China would describe the action. I think they’d be outraged.

However, I suppose I’m thinking of taking a kind of reciprocal action that a President Reagan would have thought about doing. Reagan was solidly pro-American and jealous of American prerogatives and rights. Unfortunately, Obama is no President Reagan.