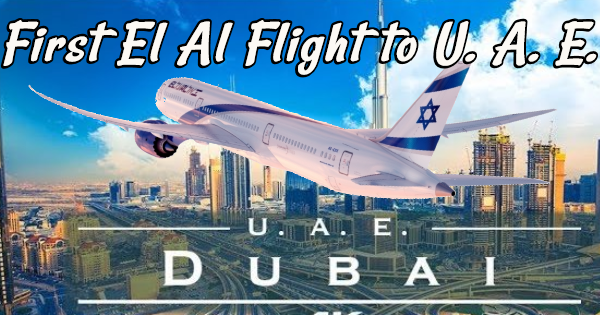 Rarely, a world event is so momentous that it deserves special notice. We have just witnessed such an event. After decades of hostilities and several past Arab-Israeli wars, an Israeli El-Al civilian airliner took off from an Israeli airport and landed in the United Arab Emirates (UAE) located on the southern shores of the Persian Gulf. Not many years ago, the possibility of this happening would have seemed like a pipe dream. But now it has happened, and this event may signal that a new era is coming in Israeli-Sunni Muslim relationships. Considered in its modern context, this event is as remarkable to the Mideast as the fall of the Berlin Wall was in Europe.

The first link and second link detail the remarkable facts about this flight, which graphically symbolizes the full normalization of relations between Israel and the UAE. Notice the Israeli, UAE and American flags flying from the cockpit of the El Al plane as it arrived in Abu Dhabi in the UAE. This attests that the normalization of relations between the two nations owes much to the diplomatic efforts of President Donald Trump and his son-in-law, Jared Kushner. The second link includes a video showing the arrival of the El Al plane at the Abu Dhabi airport, and the very friendly nature of the entire event. Notice also that this Israeli flight to Abu Dhabi was called the “Abraham Accord Inaugural Flight.” I think this remarkable term reveals that the UAE Arabs and the Israeli Jews are both proclaiming that they recognize each other as common descendants of the biblical patriarch, Abraham. The Israelis are descended from Abraham via Isaac and Jacob (renamed “Israel” later in life) who fathered the tribe of Judah and 11 other tribes, and the Arabs are descended from Abraham via Ishmael. These facts are discussed and documented in my books on Israelite history, available at the home page of this website. For this reason, the title of the inaugural flight between these two nations was most appropriate.

The third link offers what I thought was an insightful analysis of this event. It focuses on the fact that this was the first time an Israeli airliner has not only landed in Abu Dhabi, but that is also crossed Saudi Arabia on its flight path. The link observes that this key Saudi permission constitutes “more than passive validation to the Israeli-United Arab Emirates peace deal…” All the nations in the region noticed that the Saudis permitted an Israeli airliner to cross its airspace so it could land in the UAE, a close Saudi ally. This cannot help but embolden other Sunni Arab nations to follow the UAE’s example. It is likely only a matter of time until the Saudis also establish full diplomatic relations with the Israelis. The link also notes “the old rules are being rewritten” in the Mideast, and that “Saudi Arabia is signaling approval.”

This event reminds me of a previous act of statesmanship in the Mideast to make peace between Sunni Arabs and Israel, and it also involved an airplane flight. When President Anwar Sadat of Egypt flew in an Egyptian airliner to land at an Israeli airport and speak to the Israeli Knesset in the 1970s, it was an epochal event. Egypt and Israel had fought several wars, so Sadat’s act of visiting Israel on a state visit to make peace was truly historic. I can recall setting my alarm clock to get up in the night when I lived in Minnesota and watch the event on my TV as it happened. A brief clip of Sadat’s speech to the Israeli Knesset is in the fourth link. Jordan followed Egypt in establishing diplomatic relations with Israel, but no other Islamic Arab nation has followed that example until the UAE recently did so.

The UAE and Israel will be establishing cooperative bi-lateral links on many levels in the following months, but it must always be remembered that both nations are threatened by Shiite Iran so military cooperation will be a big part of this new Israeli-UAE relationship. Many articles have speculated that the next Sunni Arab nations, that recognize Israel maybe Qatar, Oman, the Sudan, and Bahrain. However, the next Islamic nation to establish diplomatic relations with Israel is now known, and it is not an Arab nation. It is Kosovo, an overwhelmingly Sunni Islamic nation in Balkan Europe (fifth link). Again, this was a diplomatic triumph for President Donald Trump and his unfolding Mideast “deal of the century.” Not only did Kosovo begin the process of establishing diplomatic relations with Israel, but Kosovo and Serbia signed an economic deal between their usually hostile two nations. There is more. Serbia agreed to move its Israeli embassy to Jerusalem, a very significant step. Serbia’s taking this action may pave the way for other European nations to do the same. The signing ceremony for all these actions took place in the Oval Office of the White House with President Donald Trump sitting at a table together with Kosovar Prime Minister Avdullah Hoti and Serbian President, Aleksander Vucic (fifth link and sixth link). Whether you like Trump or not, anyone can see that these are huge peace deals he is midwifing.

These are historic “peace breakthroughs” to use the language in the title of the seventh link. It is my strong opinion that if Trump was a Deep State, globalist president, the Leftist media would be cheering these breakthroughs as the historic peace agreements they truly are, and that they would be forming a chorus for President Trump to receive the Nobel Peace Prize. Do you think not? Remember that President Barrack Obama was awarded the 2009 Nobel Peace Prize soon after his election even though he hadn’t done anything even remotely worthy of the award and his award was met with significant criticism (eighth link). Indeed, even Joe Biden may have had an indirect and unintended role in strengthening the Israeli-Arab ties at this time. The Obama-Biden administration heavily favored the Iranian Shiites and essentially gave Iran everything it wanted in the nuclear deal which President Trump later repudiated. Much to the horror of the Israelis and the Sunni Arab nations, the Obama-Biden administration also sent mega-billions of dollars to Iran in either direct cash or funds released from frozen Iranian accounts. The Obama-Biden actions enabled Iran to buy many weapons with which to invade the Sunni Arab nations and to  attempt to “wipe Israel off the map.” Given the known pro-Shiite Iranian, anti-Sunni Arab bias of the Obama-Biden administration, the mere thought of a Biden administration might be hastening stronger Arab-Israeli ties to quickly forge a united front with which to confront Iran.

A recent post of mine (and various previous ones over the years) have expressed my expectation that due to the wisdom of the maxim, “The enemy of my enemy is my friend,” the Israelis and Sunni Arab nations will be pushed together as friends and allies vs. the militaristic and bellicose policies of modern Iran. I have also expressed my view that because no descendants of Abraham are mentioned as being in the “latter-day” Gog-Magog alliance in Ezekiel 38:2-6, that it is logical to expect that all the descendants of Abraham will be in the alliance of the nations which will be attacked by the Russians, Chinese, Iranians, etc. when this age experiences an age-ending war that would destroy all life on earth if divine intervention did not occur (Zechariah 14, Matthew 24:21-22). If any reader needs to see convincing evidence that we are living in the biblically-prophesied “latter days,” that evidence can be found in my article, Are We Living in the Biblical Latter Days? If you wish to see how the age-ending World War III will start, be fought and how it will end, you can see these prophetically-revealed details in my article, What Ezekiel 38-39 Reveals about a Future World War III.