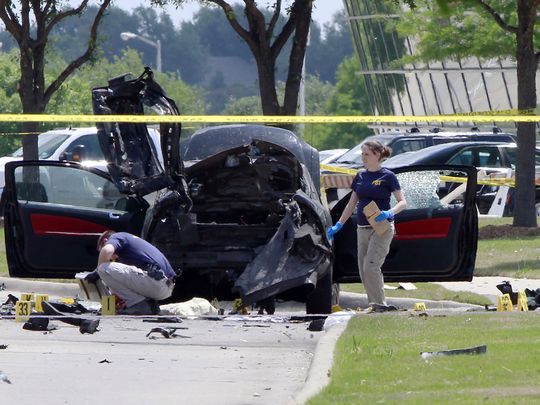 Remember the fairly-recent mass shootings by two Muslims in San Bernardino, CA who became radical Islamic terrorists and turned on their co-workers–killing many of them? The authorities did not anticipate their radicalization and terrorist act before it was perpetrated. The Islamic perpetrators of the Boston Marathon were not apprehended by the FBI or any civil authority before they perpetrated their terrorist act. Remember the 2014 incident where an innocent woman was killed while at work and beheaded by a fired co-worker who had turned to radical Islam and the terrorist might have killed others if an armed administrator hadn’t shot him dead to stop further fatalities or injuries (third link)? The point is that the worst threats are posed by those who are being radicalized by ISIS or some other Islamist group, but about whom the FBI or other authorities do not yet have any knowledge. After all, potential terrorists don’t want to be caught, so they will do what they can to evade detection.

The FBI warning should be taken seriously by all; however, the FBI may not be aware of all the potential terrorists who are slipping across our unguarded borders or are embedded among Islamic migrants and refugees who are entering the USA from Syria or other Islamic nations where civil order has collapsed. The FBI and civil authorities only have so many resources, and can’t possibly be aware of all potential terrorists. I’m sure the FBI is doing the best it can.

This is not a threat limited to the USA, as all readers know. Terrorism has struck at many nations. Islamic terrorism struck Paris, France and locations in Belgium recently. Not all acts of radical Islamists rise to the level of terrorism; some of them perpetrate acts of criminality in their host nations. Such criminal acts inside European nations have led to a backlash of public sentiment favoring nationalistic political parties. The fourth link offers information about the crime wave being given its impetus by Islamic immigrants/refugees inside Germany. This is a dangerous international problem that is getting steadily worse, and it has many major potential ramifications. Governments may fall if more terrorist and criminal acts are perpetrated inside European nations. The EU itself could potentially unravel if the Islamic immigrant crime wave continues. Worries about Islamic terrorists or criminals coming into Great Britain due to liberal EU travel policies could lead to the “leave” side winning the British “Brexit” vote later this year (polls now show it to be a close referendum).

The Apostle Paul warned in II Timothy 3:1 that the latter days of our age would feature “perilous times.” That prophecy has certainly come to pass. For those readers who are unsure about whether the Bible’s prophecies can accurately foretell the events of our time or that we are, indeed, living in the biblically prophesied latter days, I urge you to read my free article, Are We Living in the Biblical Latter Days? After reading that article, I don’t think there will be any doubt in your mind on the question. Biblical prophecies indicate we are heading into unprecedentedly dangerous times that still lie ahead of us. Future terrorist acts could easily strike at critical infrastructures such as Internet nodes, power facilities, water supplies, key bridges, food transportation networks, financial services, dams, etc. If such terrorist acts are successful in interrupting key services, you need to be prepared in advance to make sure you and your loved ones can cope with a situation where vital goods and services may not be available for a time. My article, Should Christians Prepare for Future Hard Times?, offers common sense, biblically based principles to keep in mind in making such preparations. I urge you to read that article as well. It is not just terrorism that could interrupt vital goods and services that you depend on. Weather disasters such as hurricanes, tornadoes, earthquakes, floods, tsunamis, etc. can also prevent you from having access to necessary goods and services, and Matthew 24:7 and Luke 21:25 warn us to expect such weather disasters in the latter days. The time to prepare as best you can for all such events is now. Once such an event happens, you will have to face it with whatever preparations you have made up to that point. Your “window or opportunity” for such a terrorist- or weather-related-disaster event will have closed. It is a smart idea to not put off any longer whatever preparations you need to make for such a crisis.