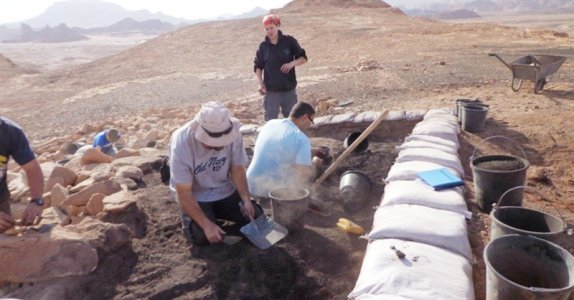 There has been an important archaeological find in Israel which has been dated to the times of the famous Israelite Kings David and Solomon. Very well-preserved seeds, fabrics, leather and other artifacts from their time have been unearthed, which is important enough. However, of greater importance is where these ancient artifacts were found. They were unearthed at the site of the reputed mines of King Solomon at which large amounts of copper ores were smelted.

The two links below offer a discussion about this find. The links report that this location was within the territory of the ancient Edomites. During the time of King David and during the glory days of King Solomon’s reign, the Edomites were subjects of the Israelites so the Edomite territory was part of the Israelite’s domain in the Mideast at that time. I Chronicles 18:11-14 records that in subjugating the Edomites, David’s army killed 18,000 Edomites in a battle to subdue them and that David put Israelite troops in garrisons throughout Edom’s territory to keep them obedient to the kingdom of Israel.

The copper mines of King Solomon were located in Edom and King Solomon and his engineers invented and applied a complex smelting process to turn raw copper ores in refined ingots or artifacts. In my E-book, The “Lost” Ten Tribes of Israel…Found! and my printed book, The Origins and Empire of Ancient Israel, I have included a detailed examination of this copper smelting site and the secular and biblical evidence about it. For example, I cite Werner Keller’s book, The Bible as History, that this ancient Israelite copper refining facility “was a proper up-to-date blast furnace, built in accordance with a principle that celebrated its resurrection in modern industry a century ago as the [modern] Bessemer system…Nowhere else in the Fertile Crescent, neither in Babylonia or Egypt, was such a blast furnace to be found…” Where in your history textbooks was it mentioned that ancient Israel had the best metals smelting facility in the ancient Mideast–that Babylon and Egypt were not the equals of the Israelites in such industrial technology? I’ll bet you never heard that as this world wants to suppress the fact that ancient Israel was a very large empire and player in the ancient world. The second link notes that the copper smelting site discovered dating to Kings David and Solomon’s time had to “manage some 30 to 40 variables” to smelt the copper ores into their refined cooper products. That was incredible ancient Israelite technology at work.

I’ll bet King Solomon invented the Bessemer system which was used at this ancient Israelite industrial site. God gave Solomon a gift of incredible wisdom that exceeded the wise men of his time (I Kings 4:29-30) and his wisdom became world famous (I Kings 4:34). Solomon mentioned that this quality of wisdom enabled him to develop and implement “witty inventions” (Proverbs 8:11-12). There was a wave of technological and artistic advances in the Mideast/Levant that historians attribute to the time of “around 1000 BC”–the time of David and Solomon. The list of important advances that occurred around “1000 BC” is discussed in my aforementioned books. People generally just “read over” the Bible’s narratives without realizing that the Israelite Empire of that time was the same empire that is generally called the “Phoenician Empire” by secular historians–obscuring the fact that the Israelites were the senior partners in an alliance with the smaller city-states of Tyre and Sidon which, combined, had the world’s most powerful navy and commercial fleet as well as a massive land army.

As a tickler to pique your interest further, I want to comment further about the ancient Israelite Smelting site that “had to manage 30 to 40 variables” in order to smelt copper ores into refined products. My aforementioned books document, from secular historical evidence, that much of the raw copper ores amassed by King David for his son, King Solomon to build the Temple and other major buildings with was mined in North America–in the American Great Lakes region. Secular history records that a vast amount of copper ores were mined in the American Great Lakes region “around 1000 BC,” but were not smelted or used in North America. Where did it go? It was shipped from North America to ancient Israel’s copper refining facility on Phoenician ships built to transport raw ores. You can read about this fascinating documentation in either of my two aforementioned books. The Bible records that David wanted to build a great Temple for God, but that God told David that his son, Solomon, would build it (II Samuel 7). Although David couldn’t build the Temple, he was permitted to amass so great a quantity of materials for the Temple that it became too much to count! I Chronicles 22:1-5 records David’s raw materials gathering and it mentions he accumulated “brass in abundance without weight”  (or “…beyond calculation” –marginal reading in KJV-Open Bible Edition). Brass is a copper alloyed with zinc. This indicates that the ancient Israelite smelting/alloying facility may already have been in operation in David’s time and that Solomon made improvements to its design when he became king. It also mentions David “prepared iron in abundance” for the Temple and Solomon’s Temple, so this confirms that iron was commonly in use by 1000 BC.

If you’d like to learn some incredible things about the history of the ancient world that are not taught in today’s politically-correct classrooms that censor out anything that confirms the biblical narratives, I urge you to order my books. I don’t think you’ll regret it.

I’d like to thank a reader for alerting me to this story.