Even the Ashes Cry out to Affirm the Bible 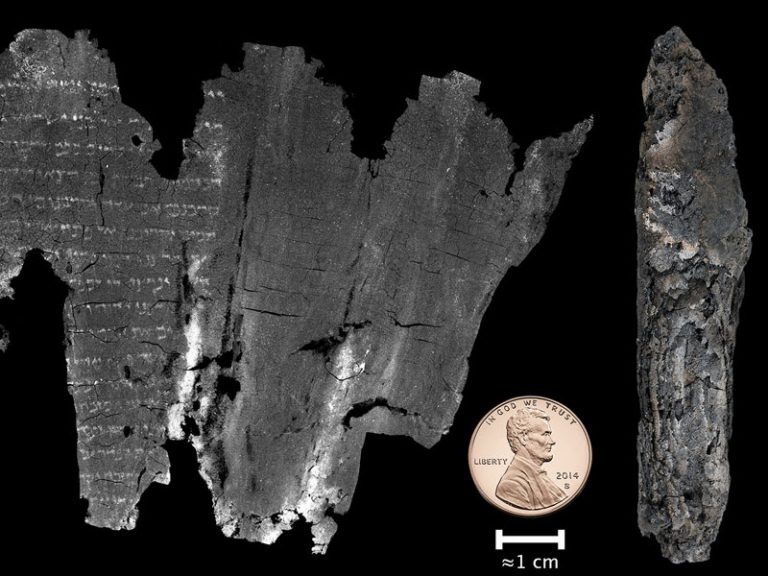 Biblical minimalists (those who seek to discredit the Bible’s divine authorship) have long sought to undermine a central tenet of the Christian and Jewish faiths: that the Bible is God’s Word and it has been preserved accurately in an unchanged form for us to read today. A recent discovery has confirmed that the Bible we are reading today is the same one that was read approximately 2,000 years ago, in the approximate time of Jesus Christ during the rule of the Roman Empire in the Holy Land.

When the Dead Sea scrolls were discovered, one of the approximately 2,000 year-old scrolls was burned so badly that it could not be unwrapped and read without causing it to disintegrate into ashes. Because of its badly damaged and unreadable condition, it was essentially forgotten for years. However, modern technology, which is progressing at an incredible rate, has solved the problem of how to decipher what was written on this badly damaged scroll. Via a recently-invented technology called “virtual unwrapping,” a sophisticated machine was able to “virtually” unwrap the scrolls and read them in a 3-D image without actually physically unwrapping or handling the scrolls in a way that would have destroyed them. Guess what was on the very ancient scroll? Written on its burnt surface were verses from the book of Leviticus. What is most remarkable is that the rendering of the verses on the ancient scroll is “100% identical” to the translations that appear in standard modern Bibles. This offers strong evidence that a divine creator authored the original books of the Bible and that only a divine God could invisibly oversee the preservation of the texts over the millennia so they were faithfully preserved for us to read them today as God originally intended them to be read. The details of this remarkable find and the high-technology tools that were used to decipher the ancient scroll are found in the two links below.

The biblical minimalists must be gnashing their teeth. They would have loved to have found an altered version of the cited verses of Leviticus in the burnt scroll so they could attack the veracity of the Bible, but instead what was discovered on the burnt scroll confirms the accuracy of today’s modern Bible. Obviously, we would love to have ancient scrolls of all the books of the Bible, but that would be asking for an awful lot. However, what was discovered in the text of the ancient scroll confirms that the modern version of the Bible is true to the ancient texts. That a testable portion of the Bible shows the modern Bible is true to the most ancient texts is strong evidence that the entire Bible we have today is the same version of the Bible read by believers millennia ago. This should be a boost to every believer’s faith!

Consider that the burnt ancient scroll was considered little more than useless ashes for many years. Thankfully, it was preserved until a time when technology advanced to the point that the scroll could be read. Indeed, “the ashes” of this ancient scroll cry out to us today that God’s Word has remained unchanged from ancient times.