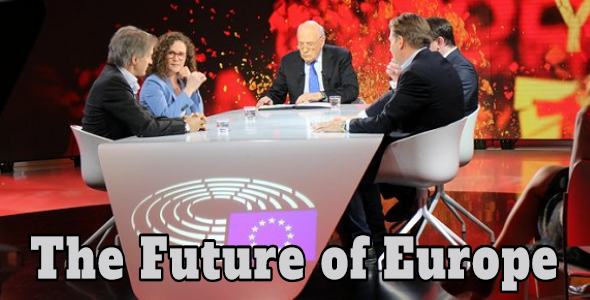 The European Union elections will take place on May 23rd. Mark the date on your calendar to see what happens as it may have a historic impact. These elections have generally been de facto “rubber-stamps” of the globalists running for election to the European Parliament. This EU election is shaping up to be more of a revolt against the globalists who have given Europe a godless autocracy administered from Brussels as well as a tidal wave of non-Christian immigrants into Europe, who threaten Europe’s historic culture. The first link details a debate among European politicians on opposite sides of what Europe’s future should be, and the role of Christianity was included in the debate. The link cites the “fissures” in the EU which are now “threatening its very existence.” It also cites the globalist leader of France, Emmanuel Macron, who called these fissures a “‘civil war” in Europe. Those are strong words, but I think Macron rightly describes the political climate in Europe. To highlight how strong the feelings are running in some European nations, the second link cites Austrians as feeling like they are becoming “foreigners” in their own nation due to the influx of too many immigrants from outside Europe.

The third link describes a meeting between the leaders of Hungary and Italy who champion the nationalist/populist points of view as they declared themselves allies in a fight to have a Europe “based on Christian values,” and they declared Europeans should look to their nationalist side instead of President Macron’s globalist side. There have been several recent national elections in Europe which reveal how quickly the nationalists and populists are gaining strength. As you read the links that I cite in this post, please realize that they are largely from globalist, pro-EU media outlets like the British BBC and the German DW. To leftist media sources, any party that is for preserving national sovereignties and borders, preserving traditional European Christian culture, etc. is pejoratively referred to as being “far right.” Let us begin the review.

In the Spanish election, the pro-EU Socialist party won a plurality of the vote but will have to form a coalition to govern (fourth link and fifth link). Ironically, it may need the support of the Catalan party (Catalonia has a strong separatist bloc which wants to secede from Spain) to govern. The nationalist VOX party was a notable winner in the election as it won enough votes to be represented in the Spanish Parliament. The sixth link gives a broad overview of the strength of nationalist parties in a variety of European nations. As you read the party vote totals, I urge American voters to realize that unlike the USA where two political parties have a stranglehold on the electorate, European nations often have many political parties and the winning party can often have less than 30% of the vote–leading to coalition governments. The sixth link also reports that the Finnish nationalist party came within a whisker of winning Finland’s election and that Slovenia’s anti-immigrant party did win first place in their national election. The link documents that the Italian government is becoming a leader of Europe’s nationalist parties, forming coalitions with nationalist parties in Finland, Austria, Denmark, Hungary, France, etc. The seventh link offers more details on the Finnish elections, and the eighth link examines the Estonian election, in which a center-right party won the most votes but a “far right” nationalist party was a close third-place finisher.

The ninth link and tenth link focus on the growing alliance between the nationalist/populist parties in Italy and France as they seek to rally similar parties throughout Europe to change the EU “from within,” and they also include a prediction by the European Council on Foreign Relations (CFR) as predicting the “anti-European” parties will gain perhaps 35% of the total vote in the European Parliament elections. Keep in mind the CFR is a globalist/leftist entity and when it uses the term “anti-European” they really mean “anti-EU.” None of the nationalist/populist parties are “anti-European.” Indeed, they are the parties trying to protect traditional European culture and religious values from the autocratic policies of the EU. The links also delineate some of the differences in the nationalist/populist, anti-EU parties as they try to forge a pan-European voting bloc.

Let us also consider the never-ending farce that is called “Brexit.” As readers no doubt know, the United Kingdom voted to leave the EU and that exit should have been effective in late March of 2019. However, something went very wrong. British Prime Minister May, a globalist, pro-EU politician who had been on the “Remain” side of the Brexit vote, hijacked the Brexit process to draft with her EU allies in Brussels an unbelievably long, legal document that would leave the UK largely under the thumb of the EU and without any representation in it. Her deal would result in a Brexit in name only. So far, the British House of Commons has seen through her efforts to reverse the Brexit vote of the British people and have defeated her surrender document three times. May intends to try and have the Commons vote on it a fourth time in early June. In order to prolong May’s efforts to make the UK a de facto colony of the EU, the EU has granted successive extensions to the legally-binding exit date and it has now been delayed until Halloween, 2019. However, this extension now means that the British people will have to vote in the scheduled EU elections in late May 2019. Almost as an afterthought, the British parties had to name slates of candidates for MEP (Member of European Parliament) positions and start an EU campaign that they never thought they would be a part of. This is when something happened that the EU bosses had not expected: the political resurrection of Nigel Farage, a prime leader of the original Brexit vote to leave the EU. He began a new British political party called the Brexit Party, dedicated to implementing the real Brexit that the British voters had voted for in the 2016 Brexit vote. The British voters, no doubt utterly sick of the establishment party politicians who have refused to heed the result of the Brexit vote, have vaulted Farage’s new Brexit party into a strong lead in the EU Parliamentary elections on March 23rd. I’ve seen polls with Farage’s party with 30-34% of the vote with various other parties trailing him by considerable margins (eleventh link). The EU, in granting extensions to Teresa May’s hapless government in London, has created the ironic situation where Nigel Farage will again be elected an MEP seated in Brussels, leading a large delegation of Brexiteers who are dedicated to leaving the EU. The Brexiteers will be logical allies of all the other anti-EU parties who are participating in the EU elections. This EU parliamentary election may have some unintended consequences for the EU bosses. Clearly, the rifts within Europe are expanding and the EU is slowly pulling apart from within. The anti-EU parties are likely to emerge in an emboldened spirit after the EU elections.

This process does have clear connections to the fulfillment of biblical prophecies. As I have written in many posts, Revelation 17-18 prophesy that the long-entrenched, global financial/political system extant on the earth will experience a massive systemic collapse in the latter days of this age, just prior to the return of Jesus Christ. I suggest you read those biblical chapters to see how globally traumatic that collapse will be. A cryptic alliance of “seven heads and ten horns” will overthrow the globalist incumbents and put in power a new global system of their own called “the beast” in Revelation 17, and Revelation 13:1-5 foretells its reign on the world scene will be a very short one–only 42 months. The EU elections in a few days may be one more step toward the future collapse of the current global Deep State called “Babylon the Great” in Revelation 17-18. God has his own timetable for global events and this prophesied collapse will occur when God decides it is time for it to happen. The EU is a major supranational entity of the global Deep State so it’s weakening from within is a harbinger of the ultimate prophesied collapse of the current globalist institutions. For a more in-depth examination of how the Bible’s prophecies are coming alive in modern world events, please read my free articles entitled: Is Babylon the Great about to Fall…Ushering in a New Beast System?, Are We Living in the Biblical Latter Days? and The Babylonian Origin of the Modern Banking System. If you do, you will gain insights into the historic events that will unfold on the global scene in our future.