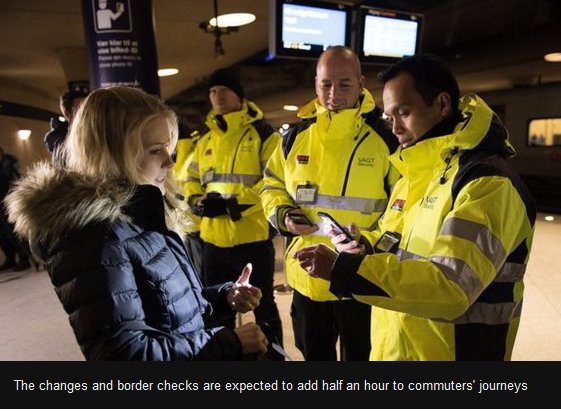 The nations of Europe are being forced to take actions to secure their borders and protect their citizens from the out-of-control influx of Islamic immigrants pouring into Europe from the Mideast and other regions of the world.

The first link and second link report on Sweden’s imposition of border controls on all people arriving in Sweden via Denmark. The links reveal that Sweden, with a small population, simply cannot absorb any more immigrants. Sweden and Denmark share a key bridge which links mainland Europe with Scandinavia so this action effectively halts not all, but almost all, travel of immigrants and refugees from mainland Europe into Scandinavia. Faced with Sweden’s decision, Denmark quickly implemented border security checks of its own for everyone entering Denmark from Germany (third link) so refugees did not accumulate on the Danish side of that key bridge as immigrants have accumulated on the French side of the European-English “chunnel” connection. Indeed, Denmark has also called for the EU to reconsider the rights of refugees under the Geneva Convention as a means to get control of the Islamic immigration/refugee crisis inside Europe (fourth link).

The Netherlands is also experiencing an anti-immigrant backlash amongst its citizens. The anti-immigration party of Geert Wilders has vaulted into first place in political polls inside that nation (fifth link). Can you imagine the next Dutch election resulting in Geert Wilders forming the next government as the leader of the winning political party? Such a possibility used to seem impossible to the EU elites who control the EU bureaucracies. Now it is a distinct possibility.

Did you enjoy your New Year’s Eve celebrations and parties? The sixth link shows how Islamic mobs ransacked parts of Brussels, Belgium on New Year’s Eve, burning 804 cars and committing other lawless acts. The link identifies the mobs as Islamic, and discusses media efforts to cover up the Islamic violence spreading across Europe as well as the resurgence of anti-immigrant political parties and movements across Europe. The seventh link shows there is a rapidly-growing resistance inside Germany to Prime Minister Angela Merkel’s very liberal policy toward letting vast numbers of Islamic immigrants into Germany. An anti-immigrant, pro-German political movement, Pegida, has released an anti-immigrant song which has skyrocketed quickly into the most popular Amazon music download in Germany. Pegida is also holding rallies across Germany and may become a force in the next German elections.

The final link sums up the anti-immigrant reactions across Europe and examines whether the Schengen-area, “border-free” travel that has been an internal EU rule is coming unglued in the face of so many Islamic immigrants invading Europe. One expert is cited as observing that: “Its basically becoming every country for itself now.”  The European political landscape is clearly in a state of ferment.

Welcome to the Year 2016. It is shaping up to be a year of major geopolitical events and changes, and this blog will attempt to highlight those which have a biblical significance as the Bible’s latter-day prophecies draw closer to fulfillment. If any reader has any doubts about whether we are living in the times prophesied in the Holy Bible to be “the latter days,” I invite you to read my article, Are We Living in the Biblical Latter Days? After reading that article, I don’t think you will have any doubts on the subject.