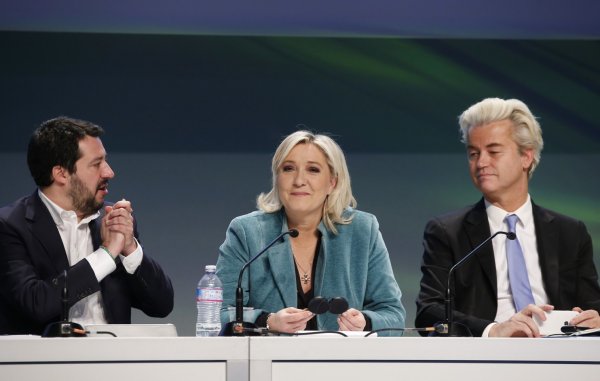 As the Trump administration begins to take office in the USA, American-European relationships are in ferment and so are the internal politics within Europe. I’ve written previously on the Trump impact in the USA, so this post is more about what is happening inside Europe.

There have been a number of anti-EU, anti-Islamic immigrant parties inside Europe, but they are now beginning to coordinate their activities which, if successful, could tear down the entire EU structures now in place. The first link reports on a meeting held to coordinate the actions of the anti-EU Dutch politician Geert Wilders, France’s Marine Le Pen, leader of the French National Front, Matteo Salvini of Italy’s Northern League and Frauke Petry, Chairwoman of the Alternative for Germany party. All are anti-EU nationalists trying to rally their countrymen to assert nationalist forces inside their nations to unseat EU parties now in control. Geert Wilders is, according to recent polls, in a good position to head the next Dutch government after the Dutch national elections in March, 2017. Marine Le Pen is likely to be a finalist in the final second round of the French national elections in 2017. The Alternative for Germany party is a rightist, anti-EU party which has risen rapidly in German regional elections.

The second link notes that a war of words has broken out between incoming US President Donald Trump and German Chancellor Angela Merkel over NATO’s role, Islamic immigration into Europe, the quality of American cars, obstacles to selling US cars in Germany, etc. The third link offers a good analysis of how the growing transatlantic stresses will affect the various nations of Europe. The author of that article thinks Merkel may be “swept into the dustbin of history” as Europe changes all around her. In Austria, the leader of its rightist party has called for Austria to ban “fascistic Islam and Muslim symbols” (fourth link). Its candidate almost won the Austrian presidency recently, so it is no fringe party.

Europe’s establishment elites are running scared…and they should. The fifth link notes that the establishment pro-EU politicians are now in fear of their own voters. It notes that the “fate of the EU is in the balance” as Europe heads into the national elections in Holland, France and Germany in 2017. Italy’s anti-Euro parties are also polling very close to that nation’s pro-EU, pro-Euro party leaders, so Italy could be headed for a major change as well if an anti-EU tide sweeps other European nations. The globalist elites met in their usual luxury recently in Davos, Switzerland, but their behind-closed-doors conferences must have been full of angst (sixth link and seventh link). I believe there were many conversations about political, monetary and financial changes they want to either implement globally or which they wish to prevent from occurring.

Believers in the Bible know that Revelation 17-18 prophesy that a massive global collapse will occur in the latter days of our age. This collapse will be monetary, political, commercial, financial, etc. It will encompass everything about our societies that we take for granted. It will be triggered by “seven heads and ten horns” (likely nations but international entities could be included) acting in concert to deliberately tear down the current globalist structures (Revelation 17:9-18, 18:1-3). The international global system is currently built on a foundation of the US dollar as the global reserve currency, but with the USA having accumulated about 20 trillion dollars in debt and with recent monetary inflation in the US dollar, its standing as the global reserve currency is getting steadily shakier. The EU, NATO, the UN, the IMF, the BIS, etc. are all part of the current interlocking globalist structures called “Babylon the Great” in Revelation 17-18. They were all surely present and discussed at the Davos conference of the globalist elites. The Brexit vote in the UK, the election of Donald Trump in the USA and the conference of the anti-EU parties mentioned in the first link are all part of the growing effort to tear down the insiders’ power structure and replace it with new policies and leaders. The Bible gives us an overall framework for prophetic fulfillments, but it does not give a lot of details about how latter day events will be triggered and fulfilled. For that reason, we need to keep our attention focused on all possible fulfillments that could occur. The growing anti-globalist movements in the USA and North America could fulfill the prophecy of Revelation 17-18. One thing, I think, is certain to happen. When the major, specific, latter day prophecies of the Bible begin to be fulfilled, they could happen very quickly and the world will not be expecting these major global changes events to happen. I think the vast majority of Christians will also be surprised by their occurrence when they are fulfilled. The parable in Matthew 25:1-11 about the “ten virgins” foretells in parable form that most Christians will be “asleep” when end-time events suddenly wake them up and they realize the return of Jesus Christ is drawing near.

No one can possibly prepare for every eventuality, but Christians who take the Bible literally would be foolhardy to not make some preparations for the very hard times that are prophesied to occur in Revelation 17-18 and in many other biblical prophecies. I urge all Christians (and anyone for that matter) to read my article, Should Christians Prepare for Future Hard Times? I think it presents a realistic but balanced analysis of what God expects his people to do when they have been warned in advance that challenging times are in their future. More detailed examinations of what the Bible prophesies about the latter day collapse of our global systems can be found in my articles, Is Babylon the Great about to Fall…Ushering in a new Beast System?, and The Babylonian Origin of the Modern Banking System. These articles will give you a much deeper understanding of what the Bible prophesies is ahead of us in global events and why the biblical term “Babylon the Great” so aptly describes the modern banking system which underpins the global financial system.

We do not know how long it will be until these prophecies will be fulfilled. At some point, they will be. When they are fulfilled, I hope that you will have taken some reasonable precautions to position yourself and your family to cope with the turmoil that will surely occur. if you have any doubt that we are living in the biblically-prophesied latter days, I urge readers to also examine the evidence contained in my article, Are We Living in the Biblical Latter Days?

The fulfillment of biblical prophecies in the years ahead of us is not a game, folks. Its deadly serious. Trends and forces are in place that could quickly change the world as we know it. I hope that you are taking all of this seriously.