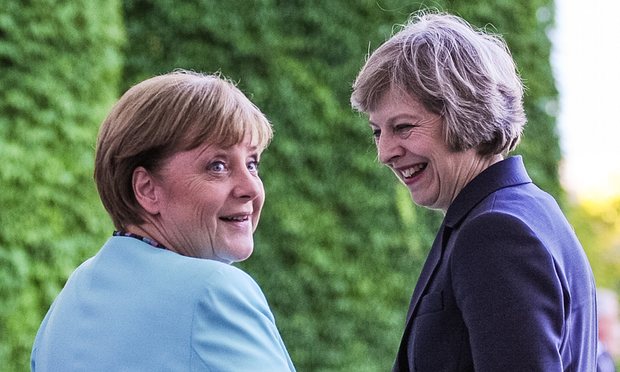 The internal crises inside Europe are getting worse. Indeed, they may be reaching a boiling point where major changes will become inevitable. The globalists’ dream of a docile Europe ruled by insider-appointed bureaucrats at the EU offices in Brussels seems to be coming unglued rapidly. First let’s look at the aftermath of the UK’s Brexit vote.

To begin with, I’d like to remind readers that before the Brexit vote, all the polls indicated the Remain camp would win by a comfortable margin. When the Leave camp won by a comfortable margin, even the Leave camp seemed surprised. This tells me that there is a Divine Hand which governs in world events to implement God’s Will re: latter days events, and that mankind’s plans will be sidelined whenever God wants to do something other than what world leaders want. Given that we are probably living in the latter days of our age, we can expect God to be more active in causing or allowing things to happen that are quite contrary to the expectations or rigged plans of the political insiders of the world [Please see my article, Are We Living in the Biblical Latter Days?]. The Brexit vote has created an impasse between the UK and the EU. The first link reports that the UK insists that certain understandings be reached with the EU about its exit from the EU before the UK triggers Article 50 which will start the formal separation process–which could take up to two years. The second link reports that the President of the EU Commission, Jean-Paul Juncker, has stated that this separation process will take “months” to get going. The third link reports that Germany’s Chancellor Merkel insists that there be no prior understandings or negotiations between the UK and the EU until the UK actually triggers its Article 50 notice to leave the EU. The positions taken by the UK’s new Prime Minister, Theresa May, and Germany’s Chancellor Merkel are, obviously, irreconcilable. This means that the UK’s exit from the EU is in limbo until they come to some kind of mutual agreement on the UK’s exit. I won’t “hold my breath” for any such agreement any time soon. There are two ways of looking at this. One is that by not triggering Article 50, the UK can choose the moment of its departure from the EU while rather selectively enjoying any benefits of EU membership that it feels like hanging on to for a time. The other viewpoint is that the EU’s position keeps the UK in the EU indefinitely and delays the Brexit vote’s implementation. This impasse will only worsen UK-EU relationships.

A second issue that is worsening the situation all over the EU is the tidal wave of Islamic immigrants pouring into Europe, the mass casualty Islamic terrorist acts as well as a heightened rate of crime from some of the immigrants. An article in the August 8, 2016 issue of Time magazine has an excellent analysis of this growing problem, but I cannot include it in this post as the link is for subscribers only. I have the print version of the magazine, and readers can likely view it for free at their local libraries. It includes such statements that the French “authorities seem powerless” against ISIS-inspired acts of terrorism, and that French President Hollande’s popularity is down to 17% in the polls–making his party’s grip on power very shaky. It adds Germany’s right-wing party is “calling for mass deportations of failed asylum seekers,” and notes how the European political realities could be changed in 2017 when France and Holland have national leadership elections and the Germans elect a new Parliament.

The fourth link reports the chaotic political situation is worsening inside Germany and old allegiances there may be ripping asunder. The Bavarian political party, the CSU, a traditional partner of Chancellor Merkel’s CDU party, is breaking with Merkel over the Islamic immigrant issue. The CSU’s leader is calling for action to halt the granting of asylum to Muslim immigrants and also called for an “immediate halt” to any talks between the EU and Turkey about the latter joining the EU, adding that “Turkey is no longer a democratic state.” The crack-down of Turkish leader Erdogan on all his political enemies after the abortive and somewhat mysterious “coup” attempt in Turkey has likely killed Turkey’s chance of ever being admitted to the EU since Turkey is sliding into an Islamist dictatorship under Erdogan. The fifth link reports that influential voices inside Germany are beginning to suggest the German army be deployed inside Germany to stop Islamic terrorism. The sixth link discusses a “fiery” speech by Hungary’s Prime Minister Orban, who said “Hungary does not need a single immigrant” and likens their presence to “poison.” It asserts that a “day of reckoning” is coming for Europe and its nations will have to either fight Islamic dominance over their nations or submit to it. Clearly, Hungary intends to fight, as do Poland, Slovakia and other East European nations. The UK has already voted to leave the EU, and the seventh link adds that the Dutch and France may vote to leave the EU as well when new governments are elected. Indeed, Hungary is acting as if it has all but left the EU already.

The eighth link and ninth link report on the growing feud between Turkey and the EU. Turkey had negotiated an agreement with the EU about allowing Turkish passport-holders to travel throughout Europe, but that is in severe jeopardy due to Erdogan’s dictatorial actions inside Turkey. One link reports that Erdogan protested a German refusal to allow him to address Turkish immigrants inside Germany, and the other link reports Germany told Erdogan that it will not be bullied by Turkey. Since Germany appeared to be the biggest backer of the proposed EU agreement with Turkey, the Germany-Turkish spat can only mean that other European nation are likely even less inclined to work with Turkey on any such agreement. The growing feud with Europe that Erdogan’s dictatorial actions are fomenting could even lead to Turkey’s ties with NATO even being in jeopardy. How can NATO allow an Islamist dictatorship to be a member of NATO?

The final link is from the Israeli press and it analyzes how weak European nations are militarily. It really is shocking to read how Germany, France, the UK and other European nations have allowed themselves to become all but disarmed! It makes one think that NATO itself is truly a hollow alliance that is not capable of any real concerted military action any longer. Apparently, the European nations have been content to delude themselves into thinking the USA will automatically come to their rescue again if Russia or someone else attacks them. The Americans are war-weary after nearly endless wars under Presidents Bush and Obama for the last 15 years. US Presidential candidate, Donald Trump, has, quite accurately observed that many European NATO nations are severely underfunding their own agreed-upon national defense efforts, and that these freeloading nations ought not to take US military protections for granted. Europe has a very severe problem. They must dramatically increase their military spending to make some adequate preparations for their own defense. If they refuse to do even that, there really is no hope for them.

The above ferment inside Europe should be watched closely by all Biblically-minded people. Some Christian determinations have expected that the “beast” and “false prophet” foretold in the book of Revelation will originate inside Europe. That is quite possible, but it is not a certainty. II Thessalonians 3:1-9 and Revelation 16:11-14 clearly prophesy that the beast and false prophet partnership will perform miracles to deceive the masses. I do not claim to know when these two great false leaders will arrive on the scene, but when they do, it will change everything overnight. If a great religious leader begins to perform real or imagined miracles ( II Thessalonians 2:9 allows for both) and instructs the leaders and citizenry of Europe to rearm and be ready for war, you would see a resurgence of militarism inside Europe that will amaze everyone. Again, I don’t set dates, but tremendous ferment and tensions are already unleashed inside Europe, the EU and NATO. Let’s be sure to watch what happens inside Europe to watch for possible biblical fulfillments in the future.