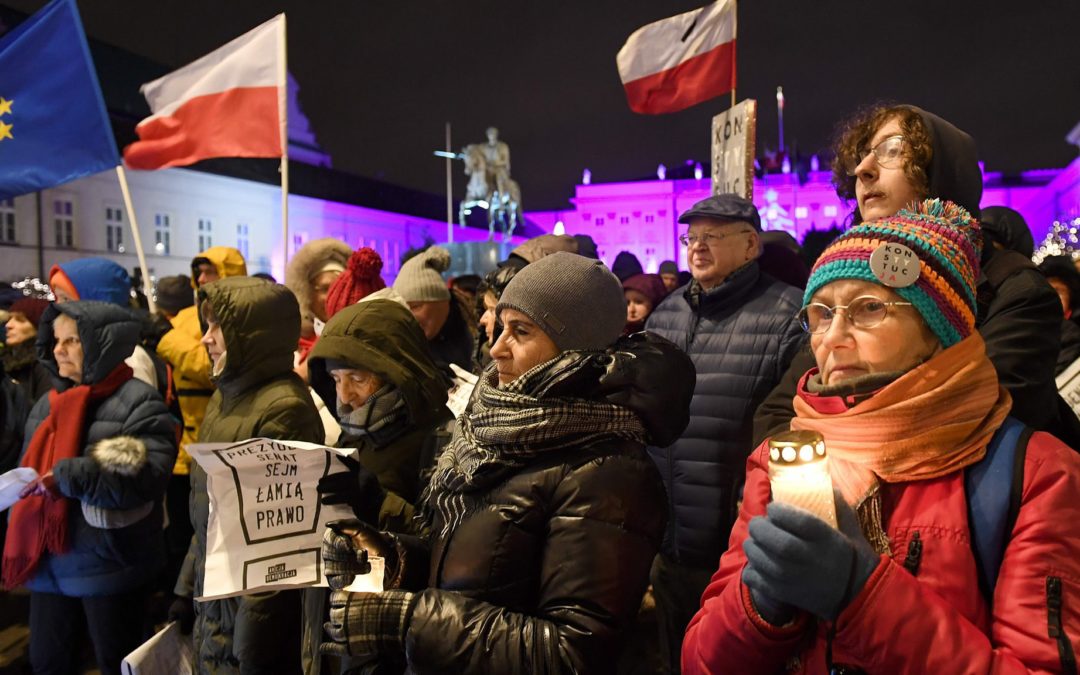 There is another very important development which is threatening to split the EU’s member nations into separate blocs. The eastern nations of the EU which were under the Russian boot for decades in the Soviet era are forming their own “sub-caucus” within the EU, and the western nations of the EU are not being invited to be a part of it. This new eastern EU bloc is called the “Three Seas Initiative” or the “Trimarium” group (meaning the nations between the Baltic, Black and Adriatic Seas), and there are a number of issues which are causing this rift to steadily worsen. Irreconcilable immigration policy differences are a large part of the split, as is the EU’s meddling in the internal affairs of the eastern bloc nations which deeply prize their own sovereignty rights after being freed from the Soviet Union’s control circa 1989-90. The first link refers to this growing split as the most serious crisis within the EU since the Brexit vote in the United Kingdom.

The first link and second link describe the major split between the Polish government and the EU over Poland’s firm refusal to accept the number of Islamic immigrants that the EU bureaucrats have decided that Poland must take (there are also rancorous issues about the Polish government’s internal decisions). One can understand Poland’s position rather easily as it does not want to have to suffer the consequences of the EU’s disastrous decision to accept a tidal wave of Islamic immigrants into the EU as well as many non-Islamic immigrants from Africa. Many eastern and central EU nations have refused to accept their “share” of the refugees (as decided by unelected EU bureaucrats) admitted into the EU due to lax EU border controls. I think it is fair to say that the eastern European nations’ position is that since it was Germany, France, Italy, Belgium, Sweden, etc. that unilaterally decided to accept so many immigrants into Europe, those nations should keep them inside their borders or resettle them to their original nations.

Another major fracture point that is separating eastern and western Europe is religion. While Western Europe has lost touch with the Judeo-Christian values and beliefs that made historically European nations strong, it was Christianity that helped the Eastern Europeans maintain their unique national identities during the long Soviet occupation (which followed the Nazi occupation). Poland and other Eastern European nations would actually like to “re-Christianize” the western nations (third link), but it seems the humanist/atheist nations of western Europe have no desire to rediscover their lost Christian roots.

The above links relate that the EU wants to use a heavy-handed procedure to deprive Poland of its voting rights within the EU (called a “nuclear option” vs. Poland). Hungary has already stated that it will veto any such effort by the EU bureaucrats, and that should protect Poland as any such attack vs. Poland would have to be unanimously approved by all other EU members to cause it to be implemented. It seems to me that any such attack by the EU on Poland would be foolish, as it would very likely motivate Poland to leave the EU, as has the United Kingdom. If Poland leaves, a number of Eastern European nations might follow it out of the EU. The fourth link reflects the opinion of an economist who thinks that Poland would have to pay an approximately 92 billion Euro “fine” or “repayment” to the EU if it left the EU. I think that economist is living in an “ivory tower” dreamworld. If Poland leaves the EU and the EU presents Poland with a 92 billion Euro bill for leaving the EU, who or what will enforce such an arbitrary bill by the EU? The EU has no army, navy or air force. Will the EU charter a Cessna and send a few bureaucrats with suitcases accompanied by a couple EU security guards to enforce such a dictatorial edict? Poland can meet them at the airport with an armored division. Who do you think will win that confrontation? The EU is already making arbitrary demands upon the United Kingdom to pay perhaps 45 billion Euros for the privilege of leaving the EU. A recent post examined the vote in the British House of Commons that the British Parliament, not Prime Minister May, will have the final say over the terms of the UK’s exit from the EU. The exceptionally high and arbitrary EU demands vs. both the UK and Poland could stiffen the resolve of both those nations into simply saying “no” to the EU’s demands for money, or they can decide the amount of money they are willing to pay. .

I believe the EU is seriously overplaying its hand. The EU was an outgrowth of the old Common Market’s customs and travel grouping, but the EU is acting ever more like a new “Fourth Reich” which is arrogating to itself a right to impose its will on the rest of Europe. The EU needs to remember it has no “hard power” to enforce its edicts. Lacking any hard power, it has little real “soft power” either. Germany, which has dominated the EU, has a caretaker government after its most recent election, and it still (as of this writing) has no governing coalition yet. Italy’s government has just fallen and they will not have a new government until after March 4th, when that nation holds a new national election. Spain is in a major challenge to stay in one piece as Catalonia seems determined to try to secede from Spain. A recent post cited an op-ed piece from the Wall Street Journal which stated that the EU was now in a “fragile” condition. In spite of this fact, the EU’s leaders are acting as if they are some kind of autocratic European government–a role for the EU that much of Europe does not accept.

The final link has maps which indicate the nations which are forming the Three Seas Initiative in Eastern Europe. If “push comes to shove” within the EU, the eastern nations have a major advantage on their side: US President Donald Trump. Trump was warmly received in Poland soon after his election and other Eastern European nations like Trump’s nationalist positions. While in Poland, Trump attended a major conference of the Three Seas Initiative nations–putting an imprimatur of American approval on this eastern group of European nations. The USA, which leads NATO, has a lot to say about what happens within Europe’s nations. The EU would be wise to remember that immutable fact.

Long-time readers of my posts already know my belief that the Bible’s prophecies re: the latter days are coming to pass in the modern world with great specificity (see my article, Are We Living in the Biblical Latter Days?). A very key event in the latter day prophetic sequence will be a sudden collapse of the current global political/financial/monetary systems. This collapse is foretold in Revelation 17-18, which calls the current globalist/insider/”deep state” system “Babylon the Great” in its prophecy. The EU and the Euro currency are two major pillars of this globalist deep state system. If the EU suddenly splits in a major way, it is difficult to see how the Euro currency will survive any breakup of the EU. A break-up of the EU, followed by a major crisis in the viability of the Euro and all global debts and assets denominated in that currency could easily result in a global crisis which would fulfill the prophecy of Revelation 17-18. I’m not predicting that this will be the way it is fulfilled, but it is one possible mechanism for fulfilling the prophecy which we should watch carefully. For much more specific information about the prophecy of Revelation 17-18, please read my articles, Is Babylon the Great about to Fall…Ushering in a New Beast System? and The Babylonian Origin of the Modern Banking System. Those articles will explain why the Bible uses the term “Babylon the Great” to describe the modern globalist world system and the prophesied events that will lead to its downfall.