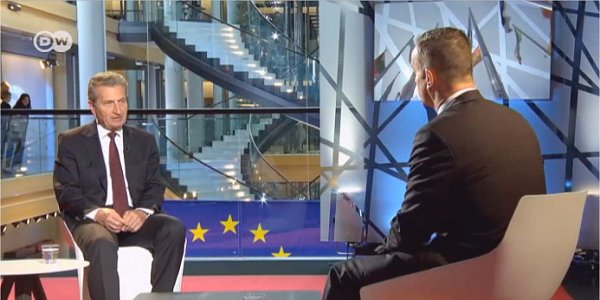 Something truly amazing has happened in Europe. The EU has shown its true dictatorial nature and, in doing so, has endangered its own future. As readers realize, Italy not long ago held a national election which saw the rightist/nationalist/Euro-skeptic parties sweep to a landslide victory. These parties had negotiated a coalition government agreement and were close to taking office. That’s when a “Twilight Zone” kind of political machination occurred. Fearing that the newly elected Italian government might eventually opt for abandoning the EU or the Eurozone, the EU’s globalist rulers did something truly bizarre. They somehow pressured the President of Italy, who holds a mostly ceremonial position, to nullify the Italian elections, dismiss the elected government and appoint as caretaker president a former official of the International Monetary Fund (IMF) who hadn’t even been a candidate in the Italian election. Then a cabinet minister of the European Commission (the unelected body that really runs the EU) also instructed Italian voters not to vote for anti-EU nationalist parties in the next election. These unprecedented actions by the EU caused a firestorm of anger among the Italian electorate, and understandably so! It also roiled financial markets throughout the world, as this strange action by the EU showed how desperate it is to hold the EU together. They essentially are saying that if more nations want to leave the EU, the EU will keep them in the EU by force. This strange geopolitical soap opera and its consequences are detailed in the first five links below.

For we Americans to grasp something close to what has happened in Italy, allow me to make a loose analogy to put it into an understandable context for Americans to comprehend. Imagine the effect it would have had if after the 2016 elections, The UN had tried to void the American election results, prevented Donald Trump from becoming President, and had installed as “interim president” some official of the IMF who had not even been on any of the state ballots. This couldn’t happen in the USA as the US military, whose officers take oaths to defend the US Constitution from all enemies foreign and domestic, would have stopped any such action by military force. The USA also does not have a parliamentary form of government so my analogy is a loose one, but it will offer some kind of awareness of the shock the voters of Italy are now experiencing.

The EU is now apologizing for its cabinet minister instructing the Italians how to vote in their next election, but the damage to the EU has been done and it may be irreversible. The EU has grossly overreached and it has revealed its true agenda for Europe. Their heavy-handed action is backfiring badly, and the next Italian election may see the nationalists and anti-Euro parties do even better than they did in the last election. Indeed, some of these links argue that the next Italian election will become a national referendum on whether Italy should stay in the EU and Eurozone. Elections could possibly come soon as the newly-elected Italian parliament is now dominated by Euro-skeptic nationalists and they have the power to remove the EU’s puppet president via a vote of no confidence, which is almost certain to occur. The EU, via its attempted “soft coup” to seize control of Italy, may actually bring on the very result they feared.

This action surely sent shock-waves all over Europe. Every EU member nation now can see this stark fact: the EU clearly sees itself as a kind of a supranational government which can interfere in the EU member nations’ internal affairs as if those nations were mere colonies of the EU. That the EU has the chutzpah to think that they can void national election results, install a puppet government in a hostile take-over of a member nation and even tell its citizens how to vote in the next election is a stunning display of arrogance and condescension on an epic scale. If the EU thinks it can do this to one of the major EU nations, think what the EU might try to do to small member EU nations. I’ll bet a lot of British voters watching this EU hissy-fit in action are very relieved that they voted to leave the EU in their Brexit vote. This EU arrogance and power grab will surely move many voters in many nations to desire to remove the EU’s creeping tyranny from their nations as well.

There are signs that the EU’s troubles are only going to get worse. The sixth link shows that the pro-EU government of Spain is very shaky and could fall. If Spain’s government falls, another pro-EU government gets removed from power. Spain is being slowly split apart due to the demands of Catalonians to secede from Spain and form their own nation. Spain has its own internal problems, and a new election might yield surprising results there in light of the EU’s power grab to void an election result and seize control of Italy. The final link shows Hungary is taking even stronger measures to defy the EU. It intends to criminalize giving food or legal advise to illegal immigrants and it intends to amend its Constitution to prevent other European nations [read Germany and France here] from sending their immigrants to Hungary. Hungary has strong support in the Visegrad Four nations (Poland, Hungary, the Czech Republic and Slovakia) for resisting the increasingly imperial demands of the EU bureaucrats. These nations were highly suspicious of the EU before the EU’s take-over of the Italian government. Think of how that action will make them even more determined to resist dictatorial EU diktats. Other European nations that hadn’t entertained the thought of leaving the EU and Eurozone may now consider doing so to save their national sovereignties and identities. If the next Italian election so strengthens the power of the nationalist, anti-EU parties in Italy that they do decide to leave the EU and Eurozone, I think other EU nations will follow in their wake. Greeks are seething under the austerity measures imposed on them by the EU and Germany, and Greece would be a prime candidate to leave the EU along with Italy. The Visegrad Four nations are also strong candidates to join any mass exit from the EU. By orchestrating a hostile take-over of the nation of Italy, the EU has caused immense problems for itself and may have begun the process of its own disintegration. It has only itself to blame if this happens.

In previous posts, I have examined the growing fractures within the EU as one possible way that the prophecy of Revelation 17-18 might be fulfilled. That prophecy foretells that a global power structure called “Babylon the Great” or “The Great Whore” will experience a sudden financial/monetary/political collapse which will usher in a new global power structure called “the beast” system. In modern terminology the global “Babylon the Great” system could be called the globalist elites or the global “Deep State.”Revelation 18:2-3 describes this system as an insider cabal of the “kings of the earth” and the “merchants of the earth” who dominate and exploit the nations to aggrandize themselves. These terms would identify modern political officials and leaders of international corporations (who indeed are “merchants of the earth,” emphasis added) as constituting the global Babylon the Great/Deep State system. The Brexit vote in the United Kingdom followed by the election of Donald Trump as the US President were perhaps the first steps toward weakening Babylon the Great’s control over the nations. The EU’s brazen take-over of the Italian government is likely to become a major self-inflicted wound by the global insiders. Revelation 17-18 decree that at some point in the latter days, it will be God’s Divine will to overthrow the globalist power structure and allow it to be replaced with a final beast system which will be allowed to be in place a mere 42 months before Jesus Christ returns to destroy that final global system (Revelation 13:1-6, 19:11-20:4). Revelation 18 describes a global financial/monetary crisis which will suddenly befall the world’s economies. Revelation 17:10, 17 and 19 all predict this collapse will occur within “one hour.” This was impossible until recently when the implementation of global digital financial markets made them all so interlinked that a collapse in one market could instantly spread to all other markets in a global “flash crash” which cannot be reversed. When this happens, Revelation 17-18 will be fulfilled and the cryptic alliance of “seven heads and ten horns” who will orchestra this collapse will be revealed. If a wave of EU nations abandon the EU and the Eurozone, the Euro currency as we know it could collapse due to global doubts about the value of all debts, investments, assets and derivatives that are denominated in Euros. A stampede to the exists to “get out of the Euro” could cause the prophecy of Revelation 17-18 to be fulfilled. I’m not predicting this will occur, but the haughty action by the EU against the Italian voters has increased the likelihood the global crisis foretold in Revelation 17-18 may originate inside Europe.