EU Attempts to Create Its Own Military Force 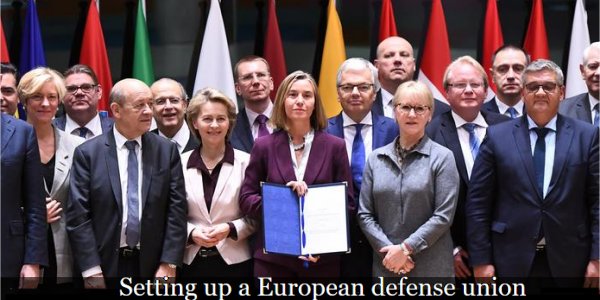 Funding is a huge obstacle. Most of the EU nations signing the agreement to set up an EU military force are also members of NATO. Only a very few of the European NATO nations are meeting their current NATO military spending commitments. Where are they going to find the funds in their national budgets to build up a meaningful army, navy and air force under an EU banner? Many of the European national parliaments will balk at increasing taxes and cutting their domestic social programs to make this happen. If they can’t find money to fund their NATO obligations, where will they find funding to create an additional EU military force?

Another issue is a residual mistrust of Germany due to two world wars, the Holocaust, the history of the German Gestapo, etc. European nations have populations that are far less trustful of German leadership of any EU military force than exists in their national governments. Some governments could fall if they try to allocate their national military forces to an EU command and forsake the NATO command structure. This is a delicate issue. The second link reports that Germany is trying to incorporate military forces from other nations into a German command structure already. Romania and The Czech Republic are cited as examples of nations allocating some of their military forces to a German command structure (second link). However, the United Kingdom is very opposed to any effort by European nations to abandon their NATO command structures (third link). Indeed, the United Kingdom has formed its own unofficial sub-unit within NATO by creating a force structure that includes military units from the United Kingdom, Denmark, Estonia, Latvia, Lithuania, Norway and the Netherlands (fourth link). This subunit of NATO is called the Joint Expeditionary Force, and Germany is not included in this European military group.

Another huge obstacle to creating any EU military force is that the EU’s own organizational structure was formed to make sure the European people had no real “say” in who controlled the EU. Its Parliament is elected, but the real leaders of the EU are all unelected bureaucrats, appointed by the insider globalist elites of Europe. The EU leaders are not at all accountable to the people, because they are not elected by the people. If an unelected, German-dominated EU leadership is suddenly given the command of a military force, the EU’s own organizational structure could easily become a European dictatorship. Vast throngs of European voters will not accept an EU military force, I believe, that is accountable to no one and is dominated by Germany. If the EU is to have a military force that is real, the EU almost certainly will need to change its own structure to allow for European-wide election of the EU leaders. If there is even a hint that an EU military will become an internal, European-wide Gestapo enforcing the diktats of the EU bureaucrats, there will be a rapid rush of nations to join the United Kingdom in leaving the EU.

Casting a huge shadow over any possibility of an EU military force is the military power of the United States. The USA is obligated to come to the defense of NATO nations in the event they are attacked, but the USA is not obligated to help any European nation whose forces have been put under an EU command structure. If the EU forces get entangled in a war with Russia or someone else, the USA has no obligation to help any EU-related war efforts. The Eastern European nations especially want to be sure that they are dwelling under the nuclear umbrella of the USA. If they forsake a NATO command structure and join any EU militarily structure instead, the USA has no obligation to assist them. No US forces defending Europe will be subject to an EU command structure. If an EU military force came into existence and became widespread in Europe, the USA may opt to leave NATO and defend only those European nations that are affiliated with a new alliance with the USA. Seen in this light, the creation of an EU military force could actually leave Europe greatly weakened vis-à-vis the Russians.

Also, there are many issues in Europe that argue against any fast action in creating an EU military force. Brexit is one such issue. The Germans and the EU leaders are currently demanding that the UK surrender its strongest bargaining chip within two weeks (the matter of how much the UK will pay to support the EU in future years based on its past membership). The UK would be crazy to surrender that bargaining chip without the EU yielding to the British on other major issues under negotiation. Also, the Theresa May government in the United Kingdom is looking rather wobbly and there may be a new British Prime Minister if she loses a no-confidence vote in Parliament. If her government falls, no agreement made by her negotiating team will remain valid, and the negotiations will start anew. Also, the May government has agreed that the British Parliament will have the right to vote on any final deal, so the English Parliament can veto the entire deal if it feels a final deal is too slanted against British interests. The German government also is now in flux. Angela Merkel’s party won the German election, but was weakened by the result. It has a significant challenge to form a new coalition government with its former parliamentary partner refusing to be part of any new government. This means Merkel’s party must forge a coalition with the Greens, a socialist party and a corporate party. The Greens and socialists are demanding liberal pro-immigrant policies, but the junior Bavarian partner in Merkel’s party is demanding tighter controls on immigration and has threatened to bolt Merkel’s party if Merkel moves to the left. Both the United Kingdom and Germany currently have rather shaky governments.

Biblically, many Christians who follow prophecy are looking for a latter-day “beast” power prophesied in the book of Revelation to arise in Europe. They may be right, but this outcome is not a certainty. Europe is in a very murky regional reality at present and many cross-currents also exist in European nations who are electing (or may elect) anti-EU governments. I will also be watching Europe closely to see if any trends toward prophetic fulfillments emerge inside Europe, and I will inform readers of this blog if any such developments occur.

One last thought. Rumors of an “imminent” EU military force have emerged every few years for some time. So far, all have come to nothing. The last link was one such past report that the EU was about to form an EU military force. Notice the date on that last link. It was written in the year 2000. That was 17 years ago. There is still no EU military force, and the above commentary outlines only some of the huge obstacles to the creation of any EU military force. It may happen at some point, but don’t lose any sleep over it yet.