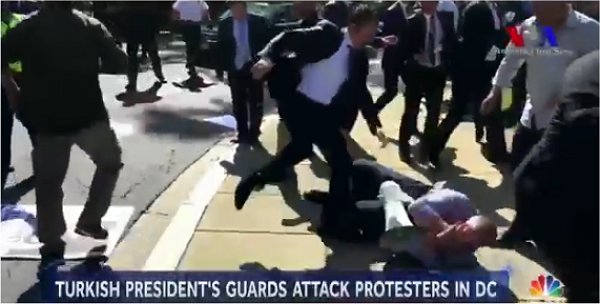 This is one of those posts where a small episode reveals a great deal more regarding a larger reality. Turkish President Erdogan just recently visited US President Trump in Washington, DC. While Erdogan and his delegation were in the US capitol, a very disturbing incident took place. The first link has video footage of what are identified as “Erdogan’s bodyguards” attacking a group of peaceful US protesters who were exercising their Constitutional rights to free speech. The first link also identifies the attacked demonstrators as “US citizens.” This is disturbing to say the least. I want all readers of this blog to be aware of this as the establishment media is not likely to give it the publicity it deserves. The second link reports the outrage of US Senator John McCain at this attack upon US citizens by official Turkish visitors. The third link reports a more dispassionate discussion of US-Turkish relations from an Asian point-of-view. The third link was written prior to the incident discussed in the first and second links.

Even if the general media largely ignores this troubling incident, you can be sure all the governments of the world noticed it. The event reveals volumes about the mindset of the Erdogan government and the people in its inside circle. I recently wrote a post which examined how Turkish policies and actions are isolating it from the rest of the world. The attack by “Erdogan’s bodyguards” against US citizens on US soil reveals an attitude which has complete disrespect for the laws of other nations and anyone who dissents from Erdogan’s anti-Kurdish animus. One cannot help but ask the obvious question: If Erdogan’s official retinue feels free to abuse dissenters and Kurds with impunity even in a foreign nation, can you imagine how they are persecuting dissenters and/or Kurds inside Turkey? This behavior, if it is indeed by Erdogan’s own security detail, is very reminiscent of the behavior of Hitler’s “Brown Shirts” on historical newsreels as Hitler cemented his dictatorship over Germany prior to World War II. Is Erdogan following this path?

In my previous posts about Turkey, I have observed that Erdogan’s policies are alienating his former allies and natural partners in the world. Will Turkey continue on a path which consolidates an Erdogan dictatorship inside Turkey even as Turkey isolates itself even further from the western world with further anti-democratic tactics? It seems evident that the spirit of Ataturk and democracy is either dying inside Turkey or is already dead.

My previous posts have identified Turkey as a modern nation descended from Edom, another name for Esau, the son of Isaac (Genesis 36:1). I have always seen it as significant that when God inspired the prophet Ezekiel to list the names of the nations who will compose the Gog-Magog alliance which will come into being in “the latter days” of our modern age (Ezekiel 38:1-6, 8, 16), God did not inspire Ezekiel to name a single nation that had descended from Abraham as a member of the Gog-Magog alliance. However, the vague phrase “and many people with you” at the end of Ezekiel 38:6 allows for unmentioned nations to be included in that alliance. Will Turkey (A) end up in the Gog-Magog alliance or will the spirit of Ataturk arise from the ashes to again govern Turkey and place it in the western alliance (that will be the enemy of the Gog-Magog alliance), or will Turkey be an isolated nation all by itself? I make no predictions, but I will be watching Turkey’s future actions to see which option proves to be Turkey’s destiny. I hope that you will be watching as well. Turkey’s location astride the Bosporus and Dardanelles gives it a very strategic location. If Turkey “goes rogue,” it will have a major impact on global geopolitics.