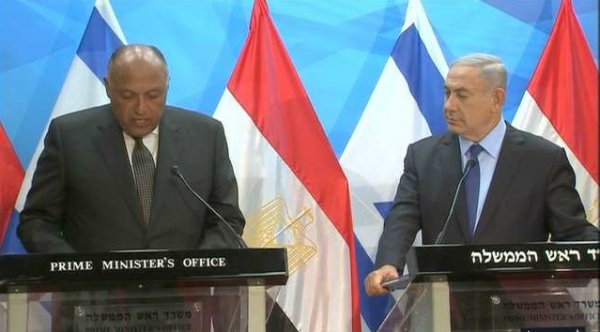 The Foreign Minister of Egypt, Sameh Shoukry, recently concluded an official visit to Israel for meetings with Israeli Prime Minister Netanyahu and other Israeli officials. This was the first such official visit by an Egyptian Foreign Minister in nine years so this is an auspicious event. The first link offers basic details concerning the visit and observes that “cooperation between the two governments has strengthened” under the administration of Egyptian President al-Sisi, and that the visit involved talks about how to breathe life into Israeli-Palestinian talks about an agreement between those two entities.

The second link reports that, depending how negotiations progress on Palestinian-Israeli questions, the Egyptian government may extend a formal invitation to Israeli Prime Minister Netanyahu to visit Egypt. This would be a most significant event, if it occurs, and it would signal that the nations of Israel and Egypt are openly drawing closer together. However, there is much more to this story than first meets the eye, on several levels.

Israeli Prime Minister Netanyahu recently led a very large Israeli delegation to East Africa boosting ties and trade between Israel and East African nations. The third link states that Prime Minister Netanyahu was accompanied by “80 officials representing 50 Israeli companies.” Prime Minister Netanyahu and his entourage visited Uganda, Kenya, Rwanda and Ethiopia, and it is in the Israeli relationship with Ethiopia that Egypt takes a keen interest. Ethiopia is building a massive dam in the Upper Nile River region that will provide electricity and water to its immediate region. Israeli water-management technology is being called upon to “make the desert bloom” in Ethiopia as it has already done inside Israel. I have no doubt that Israeli experts will be able to maximize the water from this dam to produce both food and electricity for everyone served by this dam. However, Egypt has a real concern about this dam’s use of water as Egypt depends on the Nile River flows to provide water for its own agricultural needs. The more water Ethiopia takes for itself from the Nile River means less for Egypt to use. The third and fourth link observe that Egypt is seeking Israeli help with the Ethiopians concerning Nile River flows as the Israelis enjoy good relationships with the Ethiopian nation.

I think we can all be sure that the talks between the Egyptian Foreign Minister and the Israeli Prime Minister focused on ways that each nation can help the other. Egypt needs Israeli help to obtain assurances that Ethiopia will use the Upper Nile’s water in a way which does not harm Egypt, and the Israelis need Egyptian help to nudge the Palestinians into a more reasonable stance concerning Israeli-Palestinian peace talks. Israeli and Egyptian cooperation has been close on both military and intelligence matters as has been noted in several previous posts. Both Israel and Egypt are threatened by Islamic extremists emanating from or supported by Hamas-controlled Gaza. Egypt is fighting Islamic terrorists in Egypt’s Sinai Peninsula and needs Israeli intelligence help in this fight. Due to previous international agreements, Egypt has also needed Israeli permission to deploy its soldiers into the Sinai to fight the Islamic terrorists, and Israel has, quite understandably, given its approval to Egypt on the matter (fifth link). Most significantly, the fifth link also offers information that the Egyptians are finding the Israelis to be far more dependable allies in their fight against Islamic terrorists than the USA under the Obama administration. The fact that Egypt is finding the USA under Obama to be less than enthusiastic about helping the fight against Islamic terrorism is not something that is likely to be either emphasized or reported in the American media.

There is another very large reason for steadily improving Egyptian-Israeli relations. Both are threatened by the resurgent militarism of Shiite Iran, which has been aided by the Obama administration’s nuclear agreement with Iran. All the Sunni Mideast nations know that Obama has harmed their interests by helping Iran and Israel sees it too. Being unable to trust the USA under Obama, the Sunni nations and Israel are increasingly being forced by circumstances to see each other as allies against Iran. I’m sure this issue was also discussed by Egypt’s Foreign Minister during his meetings with Israeli Prime Minister Netanyahu.

These developments are quite consistent with the prophecy in Ezekiel 38 which foretells with remarkable specificity how the global alliances will form and align in the latter days of our age. Ezekiel 38:2-6 lists the latter-day nations of the Gog-Magog alliance and its roster of nations does not include either Ishmael or Egypt as being in that alliance. Shiite Iran (“Persia”) is a named member of the Gog-Magog alliance and since Iran is in the alliance, it is logical in modern geopolitics that Sunni Egypt and the Sunni Arab nations threatened by Shiite Iran will not be in the same alliance as Iran. The modern Ishmaelites are found among the Arab Sunni nations in my viewpoint (the final link offers scholarly evidence to support this identification).

There is one more biblical prophecy that I wish to mention in the context of Egypt’s current role in the Mideast as well as its future. Isaiah 19:21-25 prophesies that after God first “smites” Egypt, God will “heal” Egypt as the Messianic Age begins and will even make Egypt one of the three major nations on earth during the Messianic Age! The “smiting” of Egypt may refer to the plagues which God sent upon ancient Egypt during the Exodus period when the Israelites left Egypt to eventually arrive in the Promised Land or it could refer to the initial withholding of water from Egypt by God when the Messiah reigns in Jerusalem (Zechariah 14:16-20). Obviously, we Christians believe that Jesus Christ will be the Messiah and world-ruler whose arrival is foretold in Zechariah 14. The current rapprochement between Israel and Egypt makes sense in light of the prophecy in Isaiah 19.  Since the Bible reveals it is God’s will that Egypt will be one of the three major nations in the Messianic Age, can we not see God’s hand in already drawing Egypt closer to the modern tribe of Judah (the Israelis/Jews)? Isaiah 19’s prophecy foretells that Israel, Assyria and Egypt will be the three major nations in the Messianic Age/Millennium. The biblical term “Israel” means all the 12 tribes of Israel, not just the Jews of Judah. All the modern nations of the 12 tribes of Israel will form one super-nation in the Messianic Age/Millennium, and those nations are currently spread across Europe, Scandinavia, North America, Australasia and other locations as well, as readers of my books already know. I urge readers who desire to see the documentation that Israel’s “lost ten tribes” can be found in our modern world to order my books which are available at this website’s home page.

I think we can see God’s hand in guiding Israeli-Egyptian nations to fulfill his biblical prophecies (just as God said in Isaiah 41:21-26 that he would do regarding all his prophecies). Iran’s threat against the Israelis, Egyptians and Sunni Arab nations will only get greater as time passes. Given that fact, it is logical to expect ever-closer ties between these nations as they are faced with the common reality of having to oppose the Iranian threat together.