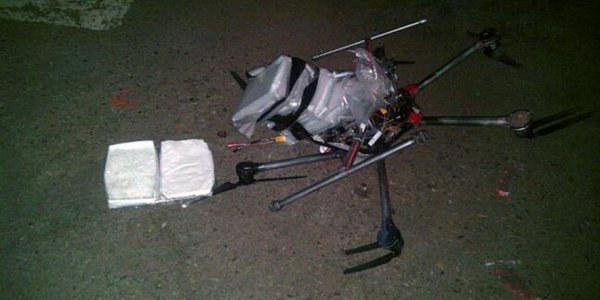 Amidst the debate about how to secure the USA’s southern border with Mexico, there is one factor that has not received a lot of attention. However, it must be addressed if border security will ever be attained. That is the fact that Mexican drug cartels are smuggling considerable amounts of drugs into the USA via aerial drones that are simply flying across the US border and delivering their cargo to drug distributors inside the USA.

The first link describes an incident from last year where the Border Patrol caught the drug receiver red-handed and confiscated the drone as well as the shipment of meth the drone was delivering from Mexico to the USA. This happened in the San Diego region, and is likely one of the few times when a smuggling drone ever gets caught. The second link describes the captured drone as being able to carry 33 pounds of cargo. That size of drone can carry a very large shipment of drugs. The second link describes that US authorities have electronically-equipped surveillance blimps to try and intercept aerial penetrations of the border, but that system obviously has a lot of holes in it. The first link states that drug lords have been using drones to bring drugs into the USA across the Mexican border since at least 2015, and reports that such drones could also carry weapons and cell-phones. I’d like to add a couple more possible cargoes to that list. If drones able to carry 33 pounds of contraband are used, they can be used to carry a considerable amount of light-weight explosives for terrorist attacks inside the USA. What is to prevent terrorists from operating a fleet of drones carrying chemical or biological toxins across the border and dropping them on a football game, outdoor music concert or city water reservoirs in cities near the border (San Diego, Tucson, El Paso, Laredo, Brownsville, etc.)? A massive amount of death and destruction could potentially be wrought by terrorists carrying out such an attack on the USA or by anyone hostile to the USA.

The third link gives us an insight into how extensive the problem really has become. It reports watchers spotted six drones coming across the border in a two and one-half hour period November 12, 2017, and five drones coming across within a mere half-hour on November 18th. These observations were in the San Diego area. Were any of them intercepted or even noticed by US federal agencies? Apparently not. This kind of situation cries out for urgent federal action to secure the US-Mexican border, but what has Congress done about this clear threat to US security? It has done what Congress excels at doing, which is…nothing. President Trump is trying hard to implement border securities at the US-Mexican border and Democrats/liberals are doing all they can to prevent federal agencies from securing the border. However, it must be acknowledged that any wall or enhanced fencing at the border will do nothing to stop the invasion of drug-carrying drones into the USA. A wall or enhanced fencing at the Mexican border will help immensely at stopping illegal immigration, and preventing ground-based drug smuggling into the USA. Such a wall is long overdue as previous Democrat and Republican presidents treated this major problem with willful neglect. To stop drones, the US federal agencies need funding to purchase their own drones with sophisticated electronics to detect all incoming drones and direct weapon-equipped drones to interdict invading drones and shoot them down. This is an obvious solution, but I wouldn’t hold my breath waiting for the US Congress to do anything right. It is paralyzed by political gridlock and by its members being beholden to special interests that don’t want any effective border security measures. Meanwhile the drug lords will continue to ramp up the shipment of illegal drugs into the USA because the USA is doing nothing meaningful to stop this route of entry.

When I saw these links about this new crisis at the border, it reminded me of the biblical prophecy in Deuteronomy 28 in which God outlined sets of blessings or cursings for “covenant” nations which obeyed or disobeyed his laws and instructions. While the ancient kingdoms of Judah and Israel are long gone, their numerous descendants are alive among the modern nations. The world realizes the Jews are the modern Jews (see my article, Four Reasons the Jews are Judah ), but the world is largely ignorant regarding the whereabouts of the modern ten tribes of Israel. Both Genesis 48-49 and Revelation 7 prophecy the descendants of the ten tribes will be present in the modern world, and the former prophecy gives us clues to help locate them. My books use both secular historical evidence and the biblical prophetic clues to identity the ten tribes of Israel in the modern world, but I reveal some of the major reasons why the USA began as the nation of the Israelite tribe of Manasseh and is currently the principal “covenant” or “birthright” nation in the world (see my article, The USA in Biblical Prophecy). As such, the blessings and cursings of Deuteronomy do generally apply to the USA (and all other Israelite nations in the world today). When the USA and other European nations descended from the ten tribes generally confessed the Bible’s God as their God and many of his laws were included in our societies, our nations were blessed into world prominence and prosperity.

Now that God and his laws are being rapidly excluded from our nations and increasingly from national debates, our nations are being increasingly afflicted with the very curses that Deuteronomy 28 prophesied would occur to Covenant nations that “go wrong.” One of those curses is found in Deuteronomy 28:43 that: “The stranger that is within you shall get up very high and you shall come down very low.” Has this ever come to pass! The USA is afflicted with massive social costs from having 8-11 million illegal immigrants within our borders while European nations are being burdened by a wide range of national problems by having millions of Islamic immigrants and other immigrants from Africa which have flooded into Europe in recent years. In terms of the respective problems, it should be observed that many of the illegals coming into the USA are Hispanics who do want to assimilate into American culture. However, many of the Islamic immigrants coming into Europe not only refuse to assimilate into European cultures, but they also want to impose their Sharia laws on European regions. This is a prescription for a major crisis in the future. All of the “curses”–both major and minor– from illegal immigration into the USA and Europe are self-inflicted wounds. If these nations had strict border security laws in place and controlled their immigration rates, their illegal immigration problems would not have occurred.

Nations that forget God will inevitably pay a steep price for doing so.