Droughts Spreading Around the World 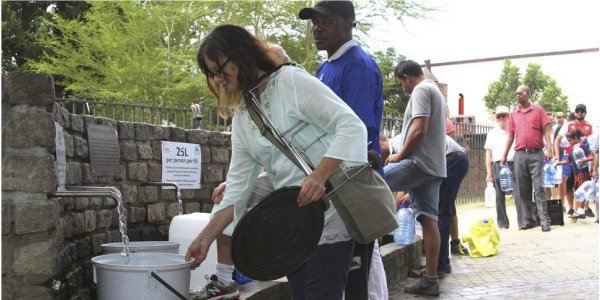 While torrential rains and floods like those that struck Eastern Texas during Hurricane Harvey or the recent heavy flooding in the Paris, France region get a lot of media attention, drought is more insidious and it advances without much notice outside the affected areas. This post is intended to draw attention to a number of worldwide droughts that are steadily getting worse, but not drawing as much media attention.

The first link and second link relate how Capetown, South Africa is in such a dire drought that the city may lose all its fresh water supplies by early April of this year. City taps could literally dry up, and a city of millions will have to depend on prodigious amounts of bottled water to keep its citizens alive. The second link also names the global cities that may be the next ones to lose their water supplies (I suggest you read it to see if any such cities are near where you live). It adds that Sao Paulo, Brazil was less than 20 days from losing its water supplies in 2015 before rains came that delivered the city from a water stoppage. All of us take fresh water for granted; however, as droughts worsen, some cities may face a water cut-off for an unknown period of time.

The United States is again facing a worsening drought, especially in its southern and western states. The third link shows the map of the spreading drought in the USA, and adds that it is now as bad as it was in 2014. Currently, that link reports that almost 40% of the USA is now in a drought condition and it includes a map showing the regions of the USA now affected. It also reports that in Oklahoma, the drought has caused 79% of that state’s winter wheat crop to be in “poor to very poor condition.” New Mexico and Colorado are in worsening drought, and California’s snowpack is also so low that 44% of that state is again in “moderate drought.” California did receive a temporary reprieve from its severe drought when heavy rains filled water reservoirs in that state, but those rains did nothing for replenishing California’s plummeting ground water tables. The report adds that Amarillo, Texas hasn’t seen any measurable rain “for a record 111 days.”

The fourth link and fifth link detail the worsening drought situation in Israel due to the plunging levels of water entering the Sea of Galilee from the northern Jordan River. As is noted in one of the links, Israel is better prepared than many nations to endure a drought as the Israelis have significant water desalination plants which can supply water to its citizens.

As I have noted in previous posts, California could be a fresh-water exporter to other western states if they had years ago exercised the foresight to build modern, cost-efficient water desalination plants all along the coast of California. Drawing water from the endless Pacific Ocean, California could now be producing massive amounts of fresh water if such plants had been built years ago via state bonding efforts. Given the pressing demand for fresh water in the western states, I’m sure California could have easily sold water bonds to build such plants as the fresh water sold to its citizens and those living in neighboring states would easily have paid off the bondholders with a steady stream of revenue. Unless California receives heavy snows to build up its snowpack, it will soon be facing severe drought again. This affects all Americans as so large a percentage of America’s vegetable, fruit and nut crops come from California orchards and farm lands which use irrigated water. If California farmers have their water allocations cut back to a large degree and they cannot plant their usual crops, America will have less food.

Matthew 24:7 prophesied that “famines” will characterize the period of time just prior to the return of Jesus Christ. Revelation 6:5-6 predicts food shortages and the rationing of food by price controls in that same period of time. It can easily be demonstrated that we are living in this period of prophetic time, as my article, Are We Living in the Biblical Latter Days?, makes evident.  There have always been droughts and famines throughout world history, so for these prophecies to have meaning, it is logical that they are predicting droughts (which cause famines) on a particularly global scale. Some thoughtful preparations are advisable for all Christians (and everyone else) to become ready for such a time. For common sense, biblically-based perspectives on how to make such preparations, please refer to my article, Should Christians Prepare for Future Hard Times? We know those times are coming. We do not know how soon they will arrive. All readers should safeguard themselves and their families by making responsible, reasonable preparations now while supplies are plentiful and obtainable. When supplies of vital staples are in short supply, it will be too late to make such preparations.