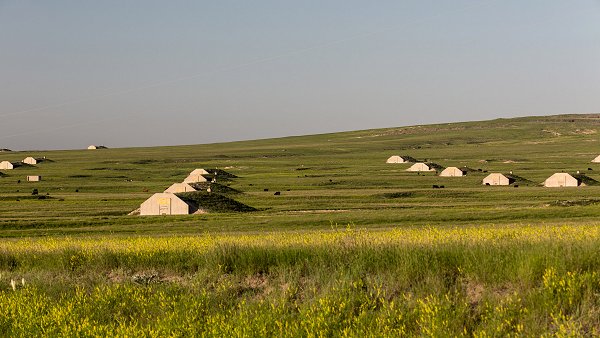 It isn’t often that I can cite something in my home state for a blog topic, but this is one of those rare instances.

The national and international media have given publicity to a “Doomsday” community which is now accepting applications from parties wishing to escape whatever future cataclysms may occur in our planet’s future. This Doomsday community is being planned in Igloo, South Dakota. The first link describes the site as a former military munitions storage complex that was abandoned in 1967. The old base still has 800 concrete munitions bunkers spread across approximately 20 square miles. The developer of this Doomsday community hopes to sell at least 500 of them to interested parties to set up this ultimate “prepper” refuge. Each concrete bunker has between 1,600-2,200 square feet and each is built partially into the ground. None of the bunkers is currently furnished and the complex is without normal civilized amenities at present. The article states this complex is located a South Dakota “city” named Igloo, but that is using the term generously as the current population of this “city” is so small it doesn’t even appear on many maps of my state. I’d heard of it growing up in South Dakota, but to find a map which mentioned and located Igloo, I had to go back to a 1957 Edition of Collier’s Encyclopedia, which states it then had a permanent population of 2,375 (among the top 25 cities in the state at that time in terms of population).

This base used to have a very large military population, and the second link mentions the location served as a POW camp for Italian prisoners-of-war during World War II. It was a large facility then, and its residents included the media celebrity, Tom Brokaw. The second link shows a photograph of Tom Brokaw, at his residence at what was then Ft. Igloo when he was a child.

The second link also offers more information about how this Doomsday community is expected to develop, and the plans sound impressive. A population of 5,000 is expected and owners of the renovated bunkers can bring their friends with them to escape whatever calamity comes. Plans for security include military fencing, military-trained security guards, 24/7 security staffing, etc. For those lucky enough to reside in pre-arranged comfort while the world goes to hell, such amenities as a general store, gym, medical clinic, restaurant, etc. are also planned. Two deep wells are already in place. If you are interested, some of the prices and terms applying to future members of this community are included in these links.

I’ll offer a brief commentary on this Doomsday community. Even if I had the money and youth to consider such an option, this would not be my choice for a location to survive a calamity. I’ve always favored a “shelter-in-place” philosophy where one has resources, friends, neighbors, etc. where one can band together with others for the common good. One thing discomforts me about the well-publicized plans for this survivalist encampment. If one wants to truly be “left alone” and be anonymous if we get to societal collapse, I suspect you would want to go to an unpublicized location. It is highly likely that such unpublicized locations do exist. Such “bolt-holes” for the rich and famous, if they do exist, would go to great lengths to make sure there is no publicity about their locations. Criminal elements in a post-apocalyptic or dysfunctional world may remember where the rich and famous people were preparing locations to hide out during a doomsday event, and they might try to raid it. However, Igloo is a long way from anywhere and it would take much time for anyone to get there from distant locations–if they could find it at all. The military, after all, did locate this base at a site where it would be very difficult to get to and very difficult (for Italian POWs) to leave.

Now for my Christian perspective on this. The Bible does prophesy some very hard times will befall the earth and mankind at the very end of this age, but when God intervenes to end this age and begin the millennium, no one will be able to hide from Him. Also, when/if times do get really bad, your only truly secure “place” will be in your relationship with God as He will be the only reliable security that will then exist. For what I hope you will find to be a balanced perspective on how Christians/Believers should face or prepare for future hard times, I urge you to read my article, Should Christians Prepare for Future Hard Times? It gives practical biblically-based guidance on the topic as well as common sense secular preparation ideas and government (FEMA) suggestions on what all families and individuals should stockpile for a wide variety of emergencies. When I first read the FEMA list, it advised everyone should have a three-day supply of whatever they need to be completely independent. Besides apocalyptic biblical scenarios, you may find yourself in great need after such events as earthquakes, hurricanes, ice storms and power outages, tornadoes, floods, etc. Every year, Americans and people all over the earth are victimized by such weather calamities, and most are unprepared for such events.

While the FEMA list of supplies is based on a three day emergency event, it is well-known that it may take a lot longer than that for government help to arrive–even in the USA. The Hurricane Katrina disaster that struck New Orleans in 2005 resulted in may people needing help for weeks before sufficient help arrived. Also, recent books have documented how an EMP blast could cause a national catastrophe paralyzing all agencies and ending electrical services throughout the USA. In the event of such a catastrophic event as that, you can rest assured that government help will not be there for years…if ever. For balance (and so readers can sleep at night) I truly do not see such an event as EMP blasts being depicted in the prophecies of the Bible.

For related reading, I also suggest visitors to this blog review my article, Christian Rights (and Citizenship Responsibilities). I believe this gives sound biblical direction for how Christians should relate to their neighbors, communities and governments in all circumstances. This was written with an American application in mind, but the biblical principles would apply within other nations as well.