Do You Have This Electronic “Espionage” Doll Now Banned in Germany? 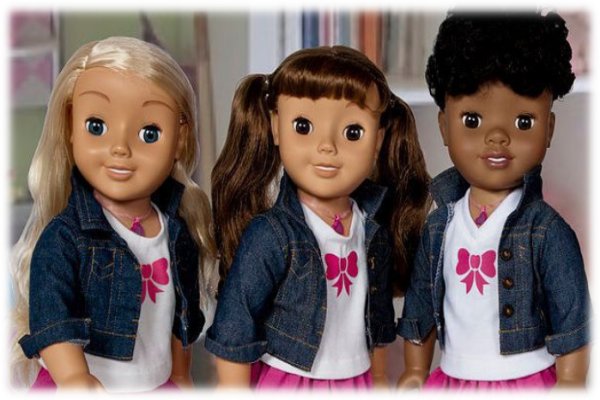 This is a different type of post for my blog, but the topic is quite serious, indeed. Consider it a public service warning for some parents whose children may have an cute doll in their possession which is actually an electronic spying tool which has now been banned in Germany as an “espionage device.” The first link, second link and third link reveal that a doll called the My Friend Cayla Doll is not the innocent doll that parents thought it was when they bought it for their children. The doll is actually a sophisticated spy device which can monitor whatever your child hears and can also monitor the conversations of adults in the room and even recognize who is in the room at any given time. The dolls are equipped with “bluetooth, an Internet connection, and speech-to-text technology to interact with children” (third link).

This is a serious matter. The second link reports that the doll has been banned in Germany as an “espionage device,” and under the German law, those who possess or sell this doll are subject to a fine of $25,000 Euros. Due to the serious penalty for owning a doll which is a sophisticated espionage device, German authorities have issued a legal notice that parents who do not destroy the doll will not be assessed this fine. However, the German government is advising that all Cayla dolls in the nation of Germany be destroyed by those who own them. Other nations in Europe are also concerned about the doll’s spying equipment, and Norway has advised people not to buy the doll. It may trouble American and Australian readers to know that this “spy-doll” is still being sold in the USA and Australia, and can be bought on Amazon.

The third link also reports that outside parties can “hack the doll and remotely control what it says (emphasis added).” The second link also reports that what the doll  hears is reported “to a voice recognition company in the US whose customers include US intelligence agencies” (law enforcement and military entities are also mentioned as subscribers to the doll-maker’s voice recognition software). How would law enforcement, military or intelligence agencies utilize such a doll? I have some theories. All over the world, little girls like cute dolls like Cayla. If this doll is equipped with a “voice recognition” software, could all Cayla dolls be remotely programmed to look for lists of individuals to locate their real-time whereabouts? This could have both good and bad usages. It could be used to locate and track child-molesters via voice-recognition software or it could be used to locate suspected criminals or terrorists. Now that the cat is “out of the bag” regarding the doll’s voice recognition software, it could even be surmised that the doll might have a locator beacon and/or a GPS location device as well. Such technology could lead to a very necessary arrest of a dangerous person or it could also be used in a way which causes harm. Let’s consider a conjectural circumstance. Suppose a Cayla doll is given to a family who has a daughter and that this family has possible ties to a suspected terrorist who an intelligence agency wants to locate via the doll’s voice recognition software. Let’s suppose the Cayla doll thinks it identifies the target criminal or terrorist amidst the many voices in a room. This could lead to a raid on a innocent gathering if the Cayla doll’s voice recognition technology made an error. I can think of quite lethal scenarios in other locations of the world where such dolls could be deployed as real-time surveillance units, but I think it is the better part of valor to exercise some caution in even mentioning such scenarios–just in case my suggested scenario may be correct.

I think the German authorities have it right. This doll is an espionage tool and any parent owning one should destroy it. It should be removed from the marketplace as soon as possible. If you are a parent whose children have dolls, you may want to check your child’s dolls to see if this espionage device-doll is there in your house already…listening to you and to everyone else within voice range in your house. The Cayla doll may be listening to everything you say in your house.

This revelation that even a child’s doll has been sold to the public with sophisticated espionage capabilities has very serious ramifications. It begs these questions: What other dolls and toys have the same espionage capabilities? What toy-makers are working with various espionage agencies to infiltrate these dolls/toys into homes and other locations all over the world?

The above revelation that dolls sold to consumers can actually be sophisticated spy devices raises much wider questions. If a doll can become a spy device in your home, so can any other electronic device that is in your home (as the fourth link, fifth link and sixth link reveal).  Indeed, in the expanding “internet of things” universe, have we reached the point where all your interconnected “smart” devices are spying on you…in every room where one of them is placed? This could include programmable appliances, utility meters, home security systems, etc. I’m no “techie” at all, but it is my opinion that just about anything which is digital can be programmed to have surveillance capabilities, and that they can be hacked by unintended parties. The last two links offer some suggestions on how to shut off some of the surveillance capabilities of some smart devices in your home.

Revelation 13:11-18 prophesies that a time will come in the latter days of our age just prior to the return of Jesus Christ that a global power/system called the “beast” will have power to monitor and control all financial transactions around the world (verse 17). This could only happen in a globally-interconnected, digital society which has also gone entirely to digital money and banned cash (or where cash has tracking taggants of some kind). In other words, it prophesied about a society that sounds a lot like the one we are now entering. Either the book of Revelation was written by someone who was uncannily lucky in his projections, or it was inspired by a Creator God who knew exactly what mankind’s society would look like in the latter days of our age. Daniel 12:1-4 also prophesies about “the time of the end” when “knowledge shall be increased” (King James Version). This translation does not do this prophecy justice. The Hebrew word translated “increased” is the same word used to describe how the waters in the Flood of Noah’s time “increased” (Genesis 7:17) to cover the entire earth. In other words, it can mean an exponential increase, and Daniel 12:4’s prophecy about the time of the end means that knowledge will increase exponentially at that time. That time is now.

If there are readers who would like much greater detail about how the Bible identifies our modern time as the latter days of our current age, please read my article, Are We Living in the Biblical Latter Days?

My thanks to a reader for alerting me to this matter.