DID YOU HEAR ABOUT “OPERATION PITCH BLACK” IN AUSTRALIA? 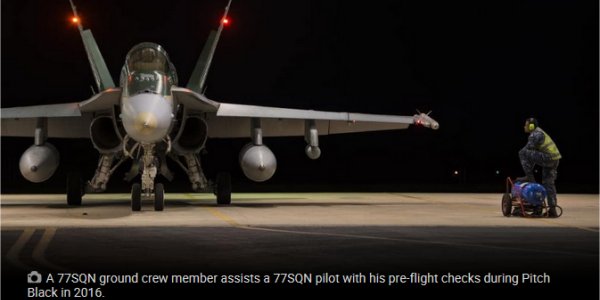 Here in America, our media is so fixated on the news and fake news from “within the beltway” of Washington, DC, that many worthy international events and stories receive little or no coverage. Such was the case, in my opinion, with Operation Pitch Black that was held in Australia recently. Operation Pitch Black was an aerial and ground military exercise hosted in Northern Australia which featured 140 warplanes and approximately 4000 personnel from 16 nations listed in the first link. It was an extensive, three-week military exercise. As multilateral military exercises go, this one was unusually long. The second link, a video report about the exercise from an Indian TV source, shows readers just how extensive this exercise was. This was the first time India participated in the periodically-scheduled Pitch Black exercises, and India brought a very valuable asset with it. It sent “top-of-the-line,” Russian-made Sukhoi SU-30 fighters against which (and with which) the western-made fighters could conduct war games. The video mentions Australia, France, and the USA as “strategic partners” of India who share concerns about China’s militarism. It cites the exercise as one “conducting realistic operations as a coalition.”

The second link shows, among many other things, warplanes from the participating nations practicing aerial refueling from each other’s tanker planes. It also mentions that India sent an elite commando group as part of the practiced coordination of air and ground forces just as these nations would do in real combat. The ability of each nations’ personnel to coordinate their military assets in a realistic combat exercise is invaluable if they need to all act together against a common foe. The unspoken common foe is, of course, China. Interoperability was a word stressed in both the second and third links The third link is a media release about the exercise from the Indian Defense Department and it cites the very interesting fact that pilots from the various nations flew missions in the warplanes of other nations. For example, Australian F-18 pilots were able to fly in Indian Sukhoi SU-30s and vice versa. No doubt, ground and maintenance crews practiced servicing and rearming the warplanes of other nations, and joint tactics were developed based on each warplane model’s capabilities. No doubt, there was considerable time spent ensuring that pilots, soldiers, etc. of so many nations could understand each other via secure communications links. Also, it is certain that the pilots and other military personnel of each nation will be able to train their fellow pilots in what was learned when they return to their home nations. The fourth link offers a montage of photos from the 2018 Pitch Black exercise.

There are some side-bars to this story that is well worth bringing to readers’ attention. The fifth link discusses the military power of Singapore, one of the nations participating in the Pitch Black exercise. Singapore is a city-state nation, but it has an unusually large military force. It has 100 modern, American-made F-16’s and F-15s in its air force, German main battle tanks in its army, French frigates in its surface fleet plus it has a submarine fleet. Singapore is reported to have the best military force in Southeast Asia, but its small territory makes it vulnerable to losing many military assets in a single attack. The sixth link reports that Singapore bases some of its warplanes in the USA, France, Australia and New Zealand in permanent or extended deployments, so Singapore has taken actions to make sure many of its assets survive any attack upon Singapore.

France sent three fighter planes and three large transport-size aircraft to the Pitch Black Exercise. After these exercises were concluded, the French warplanes visited a number of Southeast Asian nations to further establish links with those nations and also to give those nations chances to inspect and purchase these models of French warplanes. The French Air Force contingent made history when it landed in Vietnamese airports as a guest of Vietnam (seventh link and eighth link). This was the first visit of French warplanes to Vietnam in over half a century. Some readers may not realize that France had its own “Vietnam War” when Vietnam was still part of French Indochina after World War II. The USA then followed with an even longer and costlier Vietnam War mostly during the presidencies of Lyndon Johnson and Richard Nixon. The steadily-warming relations between the USA and Vietnam have been discussed in previous posts, and Vietnam’s rapprochement with France offers affirmation that Vietnam is becoming steadily more aligned with the growing nations arrayed against China’s effort to seize sovereignty over the South China Sea. The final link adds that the United Kingdom has joined the USA and France in conducting freedom of navigation missions in the South China Sea to oppose China’s claims over that large and strategic body of water through which transits a high percentage of global merchant tonnage.

The above information is interesting and informative, but it also has a biblical connection. Ezekiel 38-39 prophesies about two great global alliances that will oppose each other in the latter days of our current age. One has been described as the Gog-Magog alliance and it comprises Russia, China, Iran, and their allies. This alliance will attack the modern nations founded by the descendants of the so-called “lost” ten tribes of Israel. They have never really been “lost” at all. God gave us many clues in the Bible to locate them in the modern world and throughout history. They were prophesied to become powerful and large nations after they went into exile (Hosea 1:10) and the “birthright” tribes of Ephraim and Manasseh were given the lion’s share of these blessings. Specific clues about the descendants of each of these tribes are found in Genesis 48-49 and other chapters as well. These nations of the modern ten tribes of Israel are not to be confused with the tribe of Judah, which consists of the modern Israelis/Jews.

Ezekiel 38 reveals various other nations which will be allies of the Israelite nations in the latter days, and these are identifiable as Japan, India and many Pacific Rim nations. For over thirty years, I’ve been writing and speaking about these global latter-day alliances, and the roster of nations participating in the Pitch Black exercise are the very ones I have long seen identified in biblical prophecy and secular history as the nations in the alliance that will be attacked in a final World War III by the Gog-Magog nations. My books, available on the home page of this website, offer abundant evidence from the Bible and secular history that traces the ten tribes of Israel throughout history and into the modern era. I urge you to obtain copies of these books and see that the Bible’s prophecies are “spot on,” as friends in our British nations would say. For an introduction to these national origins in biblical terminology, please read my free articles, The USA in Bible Prophecy, Japan in Biblical Prophecy, Are We Living in the Biblical Latter Days? and What Ezekiel 38-39 Reveal about a Future World War III. If you do, you will see modern geopolitics from a biblical perspective that most will never understand.