DID RUSSIA’S STRICKEN NEW SUBMARINE HAVE A DOOMSDAY WEAPON ABOARD? 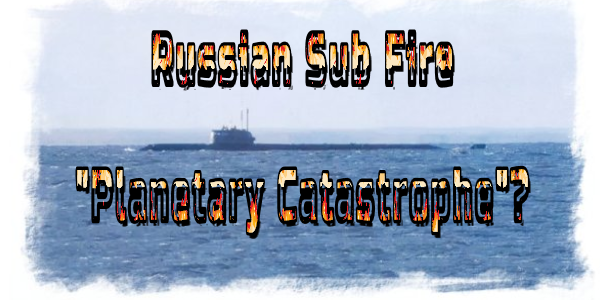 The Russian navy suffered a very serious accident recently when one of its newest submarines experienced an onboard disaster of some nature which killed 14 of its crew. The official Russian version of what happened can be found in the first link, but its syntax indicates it is an English-language translation of a Russian press release of some kind. The tenor of that report is that it was essentially “no big deal” and the submarine will be repaired and [eventually] put back into service.

The submarine which experienced the accident is named the Losharik, and the second link indicates it is a 230-foot long submarine capable of dives as deep as 20,000 feet. That is an incredible depth for a submarine. I’m not sure if any crewed American or Western submarine can go that deep. The second link also reports that a Russian naval source reported that by rescuing the stricken submarine, the crew has averted a “planetary catastrophe.” There are media reports that the damaged Russian sub had an on-board gas fire or possible nuclear reactor accident, but no one knows for sure. The plot thickens considerably with the information in the third link. It relates that among the dead from the accident were many of the top-ranking brass in the Russian navy. The dead included two winners of the “Hero of Russia” medal, seven first-rank captains and three second-ranked captains.

If twelve of the fourteen Russians killed aboard that submarine were of extremely high rank, it argues that either the death total is really far higher than announced or that the explosion or fire occurred in a very “classified” area of the submarine where only the top officers of the Russian navy were allowed to assemble. To have so many of the top brass of the Russian navy in one confined area of a small submarine means this was no routine test mission. Something very critically-important and secretive was aboard that submarine which only the top brass, were allowed to see or supervise. That so many of the top captains of the Russian submarine service were killed in a single accident also means the Russian navy has suffered a tremendous loss in terms of the command experience and military knowledge that the deceased captains took to their graves. This is a grievous loss for the Russian navy and for the secret project it was trying to implement on its voyage. Given the loss of so many experienced Russian captains and an unknown amount of damage to the secret submarine and its super-secret cargo, it is also conceivable that this incident was an assassination/sabotage event and that the incident was not an accident. Given that the security for this mission had to be air-tight, it is possible that it was an “inside job.” That this mission had the capacity to risk a “planetary catastrophe” does raise the possibility that a Russian officer decided the project was too dangerous for any nation to have whatever weapon or device was aboard as it endangered the survival of the entire human race. No certain answer is yet available, and we likely will never know all the facts about this accident. Some aspects of this very unusual and experimental submarine and the lethal outcome of its mission, do remind us of the movie, The Hunt for Red October, where a Soviet submarine captain sabotages the intended mission of his own submarine.

The third link offers an assessment that the Russian deep-diving sub was carrying a new type of weapon, a cobalt bomb which is several times more powerful than the biggest H-bombs ever exploded on earth. This type of bomb has a hydrogen bomb encased in an outer layer of cobalt which spreads not only massive damage but intense radiation over, any area affected by its detonation. The concept of a cobalt bomb has been around for several decades, so this is a real possibility. I will offer another alternative which is only my speculation. Perhaps the Russian submarine experienced a flaw in its outer hull which threatened to let the sea enter the vessel. At great depth, I wonder if the pressure of the ocean rushing into a deeply-submerged submarine could create enough sudden pressure on the exterior of the cobalt bomb to compress it inwardly with enough force to detonate its contents. At any rate, something happened that caused many top-ranked captains of the Russian submarine service to apparently sacrifice their lives to stop a “planetary catastrophe” from happening, and the sub had to do an emergency surfacing where it was rescued by other Russian ships. In order for that kind of apocalyptic language to be used, the weapon aboard it had to be unprecedentedly dangerous. Many questions would be raised if the USA had a submarine disaster where the casualties were largely limited to two Congressional Medal of Honor winners and an assembly of admirals and captains. The obvious question of why so many high-ranking officers were on a mission in one submarine would be investigated by Congress and the media if this had happened on an American submarine. The fourth link details past Russian submarine accidents and the difficulties the world had in learning the truth about those maritime accidents. The fifth link offers information about a past Russian submarine accident which resulted in the loss of the ship and much of the crew, and where the ocean region where it sank is now still exhibiting radiation levels 100,000 times the normal levels for that region.

What might be the purpose of this new deep-diving Russian submarine? How could such a vessel, even if it planted a huge cobalt bomb on the sea-floor, cause a planetary catastrophe? Again, I’ll offer some speculation that may or may not be close to the truth. If this submarine was used for a series of missions to place a number of cobalt bombs under the ocean at great depths, where could it do the most damage? My guess is that a series of such bombs planted around the periphery of the Pacific “Rim of Fire” could trigger such massive explosions that it could (A) tear a hole through the earth’s thin crust at that depth and open a direct way for the earth’s magma to explode up into the ocean and atmosphere, and (B) trigger a truly global earthquake that would devastate life on earth. If such unthinkably big cobalt bombs were placed on the ocean bottom at key junctures where the earth’s tectonic plates meet, the possibility of triggering a global earthquake would be enhanced. Russia could also use this experimental submarine to plant a Cobalt bomb just off the American coast and use it as blackmail to intimidate the USA into concessions or outright surrender. The ocean is very deep just off the California coast near Monterrey. That would be an ideal place for a deep-diving Russian sub to place such a weapon. Since California has many interlinked fault lines, such an explosion in the earth’s crust that near to the fault lines could trigger a massive earthquake across western America. Keep in mind that we do not know the exact nature of what the Russian military was doing with its new deep-diving sub. Since the sub was part of the Russian navy and had so many of the submarine service’s top brass on-board, you can be sure its mission and cargo were top-secret and its mission was not limited to scientific oceanographic research.

One should not discount the possibility that Russia or one of the other great high-tech powers on earth could create a doomsday weapon that could endanger life on earth. During the Cold War, Russia had an extremely ingenious doomsday system called Dead Hand that was designed to automatically launch Russia’s ICBMs at the USA and other global targets even if the Russian leadership and chain of command were eliminated in an American first strike. You can read a number of accounts about this Cold War doomsday system in a menu of options in the sixth link. I also posted about this doomsday weapons system years ago. There is also another possibility that will prove uncomfortable for Americans to think about. What if the Russians are trying to build a new doomsday weapons system because the USA already has such a system and Russia is striving to build an equivalent capability to reach a deterrent level of “Mutually Assured Destruction?” There are many possibilities at this point and few answers. What is known is that we are living in very dangerous times and they are becoming steadily more dangerous as new weapons systems reach or approach the status of “planet killers.”

These times were prophesied, millennia ago, in the Bible. Matthew 24:21-22 cites Jesus Christ as warning that, a time of unparalleled danger will face the earth in the latter days of our age. He called it the “Great Tribulation,” and stated that “except those days be shortened, there should no flesh be saved” (emphasis added). The term “no flesh” means no humans, no animals, no birds, no fish, etc. [living things made of “flesh”] would survive the crisis at the end of our current age unless Jesus Christ was sent to stop the globally lethal events from happening and intervene earlier than the prophesied schedule of prophetic “days” would normally call for. Such prophetic schedules of prophetic days can be found in Daniel 12:6-13 and Revelation 11:3 and 13:5. It is also prophesied in Isaiah 25 that the earth itself will be greatly shaken in the latter days of this age. Isaiah 25:18-19, foretell that “the foundations of the earth” will be shaken and be “broken down” and “moved exceedingly.” Verse 20 clearly indicates the earth will experience an event that makes it wobble on its axis. Some of the possibilities discussed above could cause the fulfillment of Isaiah’s prophecy. Luke 21:25-26 prophesies that in the latter days, people will have a wave of heart attacks due to the terrifying things that are coming to pass on the earth. Before the end of this age, all mankind will learn that we are like nations of ants crawling around on, an earth, made by a super-being who created all things in the physical Universe by compressing energy into divinely-designed matter and causing life to exist in the species he created. Mankind has largely forgotten that a Creator God exists, but we are going to be confronted with his reality and sovereignty very graphically before the end of this age. For an in-depth analysis of biblical latter-day prophecies which are coming to pass in our modern time, please read my free article, Are We Living in the Biblical Latter Days?

I’d like to thank a reader for one of the links.