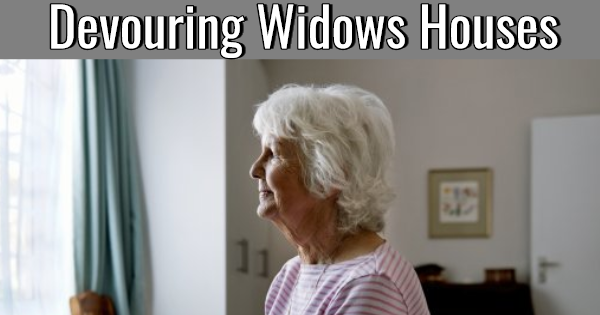 Matthew 23, Mark 12 and Luke 20 all record that Jesus Christ denounced the Pharisees for their unscrupulous, selfish and oppressive practices. One of the charges leveled by Jesus at the Pharisees in Mark 12:40 and Luke 20:47 was that they “devoured widow’s houses.” The Amplified Bible renders Jesus’ words in Luke 20:47 as: “Who make away with and devour widow’s houses…”

Devouring widow’s houses and making away with them? How could the Pharisees devour (or rob) houses owned by widows? Certainly, no one in modern Christendom would do such a thing! Don’t be too sure. Let’s consider this warning carefully in light of scriptural precedents and a common practice found in modern Christian organizations to see if the same thing could be happening today.

Somehow the Pharisees had devised a method of stealing the homes of widows. At all times, unscrupulous people will try to take advantage of the elderly by a variety of economic tricks and “con” games. However the Pharisees were “religious” people. They had to devise a way to use their religious influence and position to convert widows’ houses (likely their main asset) to an asset controlled by the Pharisees. The Pharisees did not have to rob widows of their houses via some strong-arm technique; they could easily “devour” their houses via another maneuver. They could simply talk widows into deeding their houses to the Pharisees in their wills. When the widows died, their properties would go to the Pharisees instead of to the widows’ rightful heirs among their own relatives. This could all have been made to sound very religious as the Pharisees hawked their schemes to aging widows, but the bottom line is that the Pharisees could transfer assets away from widows and their heirs to the accounts of the Pharisees, and they could do it all legally.

The concept of children receiving an inheritance from their parents at the latter’s death is a consistent theme throughout the Bible. In the time of Jesus and the Pharisees, there had to be legal mechanisms for transferring wealth from one generation to another. It is noteworthy that Jesus accused the Pharisees of devouring “widow’s” houses. Widows, by definition, no longer had husbands to watch out for their financial interests, and widows would be especially vulnerable if approached by the Pharisees at the time of their bereavement.

Let’s briefly examine what the Bible has to say about inheritance rights. When Abraham died, his son, Isaac, received the inheritance of the Divine birthright blessings as well as Abraham’s earthly possessions, and Abraham even gave “gifts” (or endowments) to the sons of his concubines (Genesis 25:5-6). When Isaac died, Jacob received the inheritance of the Divine birthright blessings, albeit by trickery (Genesis 27) after Esau had previously disowned the birthright (Genesis 25:29-34). When Jacob died, he disinherited his oldest son, Reuben, from receiving the birthright blessings because of Reuben’s blatant disregard of his father’s rights with Jacob’s concubine, Bilhah (Genesis 35:22 and 49:3-4). These accounts show that while inheritances are normally passed down from one generation to another, they can be renounced by a younger generation or the senior generation can “disinherit” certain children if they offend or act presumptuously against their parents.

When the Israelites entered the Promised Land, God emphasized the importance of estates and property remaining within a family. God gave the Israelites laws regarding inheritances to implement that objective. God was so adamant on this point that he banned the selling of family properties in perpetuity (Leviticus 25:23). He also established the Jubilee Years, during which lands and estates that had been lost by a particular family had to be restored to the original family of ownership at regular intervals (Leviticus 25:24-28). All property was protected by Jubilee Year provisions, with one exception. Leviticus 25:29-30 stated that houses “within walled cities” could be redeemed by a seller for one year after the time of sale, but afterwards would not be covered by Jubilee year protections. Few properties in ancient Israel would have been located within walled cities as a city wall was a defensive redoubt into which many people could temporarily flee to seek protection from invading armies. Everything inside a walled city was subject to being used as “community property” in a time of war, and this was a unique category of property.

I urge readers to look up the word “inheritance” in a Concordance and see how often this subject is mentioned in the Bible. The Biblical principle of leaving an inheritance for one’s children is very clear. Proverbs 13:22 also states: “A good man leaves an inheritance to his children’s children.” This passage indicates that a person should even consider leaving a portion for grandchildren. Obviously, not everyone has the resources to do this, but this statement does confirm that biblical laws were implemented in a manner which allowed for an inheritance to pass to grandchildren as well as children. Biblical law and precedents consistently indicate that one’s property or assets should be inherited by living relatives.

The Pharisees knew God’s laws about inheritances, but they apparently had devised legal mechanisms to circumvent the scriptures by convincing widows to will their properties to the Pharisees instead of to their children or other living relatives. This would be one more example of how the Pharisees invented “traditions” which contradicted God’s laws (Matthew 15:1-3).

Some modern churches and religious organizations have programs where they urge widows (or the elderly of either gender) to will their homes and/or assets to churches when they die. Biblical laws and examples argue that if people have any living relatives, the properties and assets are to stay within a family. While Leviticus 25:32-34 lists provisions to ensure that Levites retained their own family properties, there is no biblical example of God allowing non-Levites to give their inheritances to either the Levites or priests instead of their own surviving relatives. Modern churches should take warning from Jesus’ vehement condemnation of the Pharisees for their diversion of widow’s assets to themselves “in the name of religion.” His condemnation indicates that Jesus regarded such a practice as a violation of the 8th commandment against stealing. Modern churches and religious organizations which convince the elderly to transfer their homes, properties or assets to churches or religious entities in their wills instead of to living relatives are very likely repeating the sins of the Pharisees. All Christian organizations should heed the biblical scriptures and precedents about inherited properties, which indicate that the elderly should will their properties and assets primarily to their children but to other living relatives as well if they are sufficiently wealthy or if their children have preceded them in death.

Perhaps churches which have received properties from elderly donors should reconsider their practices in light of Jesus’ Christ’s denunciations of the Pharisees for their conversion of widow’s properties to their own ownership and control. In order to implement biblical laws and precedents about inheritances as well as Jesus Christ’s own words, churches and religious entities receiving donated property ought to be sure that there are no living relatives to be found before accepting such a donation.

While it may be legal in today’s society for churches or religious entities to take control of (or “devour”) the property of the elderly, Jesus Christ has already made clear his judgment on this subject. Those who “devour widow’s houses” by legal mechanisms will be judged in the next life not by any man-made definition of what is legal, but rather by God’s laws and by Jesus Christ’s words. Hebrews 13:8 states Jesus Christ is “the same yesterday, today and forever.” Therefore, what he said to the Pharisees who took widows’ properties in biblical times is the same thing he would say to those who do it today.