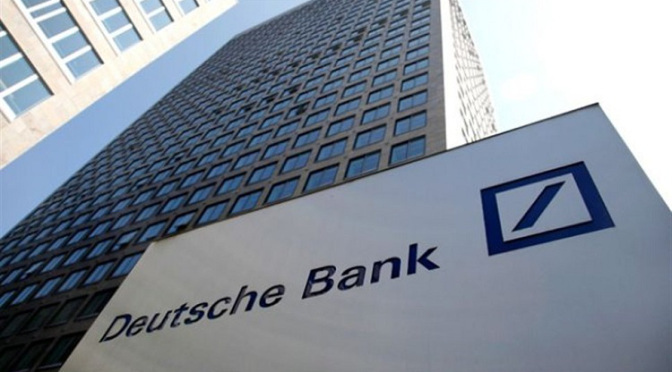 Recently, a European mega-bank, Deutsche Bank, admitted that it cooperated with other global mega banks to manipulate the gold and silver markets (first link). This story deserves far more coverage and analysis than it has been given in the establishment media. As one reads the links, it is quite evident that the mega-banks rigged the gold and silver markets to suppress the prices of both metals. However, in a conspiracy to manipulate the prices either up or down in the short term, the banking insiders could reap huge illegal profits via such insider trading actions.

What is remarkable is that Deutsche Bank has agreed to cooperate with investigators to help prosecute the other guilty parties in their sister mega banks. Presumably, the guilty parties in Deutsche Bank will be given either immunity or reduced sentences for their cooperation with global prosecutors as this investigation progresses. The second link and third link report Deutsche bank has already incriminated the Bank of Nova Scotia and HSBC Holdings in the precious metals rigging scheme (second and third banks). The first three links relate some of the details how the big banks manipulated the metals markets, but I’m sure that the Deutsche Bank staffers will reveal intimate details about the rigging procedures to the prosecutors who are assigned to this case.

There are a variety of ways that the global financial insiders have used to manipulate the prices of gold and silver. The fourth link reports how banks have used the technique of “naked short selling” to drive the prices of gold and silver down in the futures markets for a long time. You will note the date in the fourth link is from 2011, so this insider manipulation technique has been well-known about for years. The fourth link names a variety of other mega banks as being participants in the precious metals rigging schemes. Besides Deutsche Bank, it also names such insider financial institutions as JP Morgan Chase, Goldman Sachs, the US Federal Reserve Bank, the Bank of International Settlements and the Bank of England as all being involved with the gold and silver price rigging schemes now admitted to by Deutsche Bank. No doubt, all kinds of emails, texts, paper documents, and perhaps recorded phone conversations will be given to investigators by Deutsche Bank involving Deutsche Bank insiders and their counterparts in all the other named Big Banks in the second through the fourth links.

The fifth link offers a menu of Internet articles which detail how this insider scheme was used to rig the gold and silver market prices. Also, while I wrote about the information in the sixth link years ago, many more recent readers of my blog and website articles may not have seen this rather stunning admission about the role of Goldman Sachs in manipulating financial markets. Years ago, the story broke that Goldman Sachs had developed a software program to manipulate financial markets. This begs the obvious question: Why would Goldman Sachs have invented such a market manipulation software program unless they intended to (illegally) manipulate financial markets? Presumably, this software program could be used to manipulate any type of financial/investment market. There are so many stories about Goldman’s market manipulation program that I’ve simply included the sixth link as a websearch’s results in offering a menu of media links to readers about this revelation. This story was quickly “swept under the rug” by the establishment media, so the remarkable information in the sixth link may be new to many readers.

In a related story, the final link details news about a recent $5 Billion settlement by Goldman Sachs in a US government enforcement action involving Goldman’s role in deceiving mortgage-related investors about the creditworthiness of mortgage-backed securities. It joins a list of other mega-banks in making such settlements about their deceptive practices in the mortgage lending business from several years ago.

The list of wrong-doings by the world’s biggest banks just keeps growing and growing. However, the gold and silver price rigging scandal may prove to be uniquely-damaging to the Big Banks as one of their own (Deutsche Bank) is helping investigators identify crimes and manipulation practices used by the executives and staffers in its counterpart Big Banks around the world. We will see how this unfolds as the investigation continues into the future.

Biblically, this story has potentially very large implications. Revelation 17-18 prophesies that in the latter days of our current age, the global monetary/financial system will experience a systemic collapse. It identifies an unholy alliance of government leaders and multinational corporations (“merchants of the earth”) as being in league to make themselves rich at the expense of everyone else on the earth (Revelation 18:1-3). The revelation about an admitted gold and silver price suppression scheme by the world’s Big Banks comes on the heels of the announcement that a major Chinese bank has been officially added into the inner circle of banks which “fix” the gold and silver trading prices. This will make it harder for the West’s big banks to conceal their price manipulation activities from the Chinese–who have been one of the world’s biggest gold buyers in recent years. Previous posts have detailed a number of possible triggers that could unleash the global financial collapse prophesied in Revelation 17-18. Add the revelations about price manipulation schemes in the gold and silver markets to that list of possible triggers. For more detailed information about how the prophecy in Revelation 17-18 could be fulfilled in our modern world (and the new global Beast system which will emerge from the prophesied collapse), I invite you to read my free article, Is Babylon the Great about to Fall…Ushering in a New Beast System?, and its companion article: The Babylonian origin of the Modern Banking System.