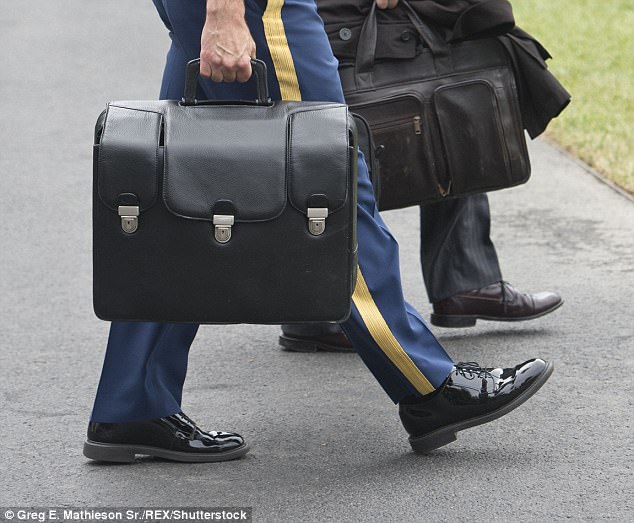 Something very ominous is happening in Washington, DC which bodes ill for the security of the entire world. There are any number of political issues which could cause such an observation, but I’m referring to a new development which is just beginning to emerge. It has ramifications that are really quite grim and revealing.

Dozens of Democrats in the U.S. House of Representatives have begun an action designed to remove Joe Biden’s exclusive control over the U.S. nuclear codes. That there are a considerable number of Democrats in Congress who do not want Joe Biden to have sole authority over the USA’s nukes is very revealing. One could dismiss this if it were political zealots from the opposing party who were taking such action, but for a considerable number of Democrats in Congress to come forth to strip Biden of his exclusive presidential authority over America’s nuclear weapons is very extraordinary. Indeed, I think it is unprecedented for such a thing to be proposed since the USA developed nuclear weaponry. I also doubt that these House Democrats would take such action unless they had the sub rosa approval of Speaker Nancy Pelosi.

The first link and second link offer the basic details about a letter written by House Democrats calling for Biden to no longer have exclusive control over launching US nuclear weapons. This speaks volumes. The third link raises and discusses the painfully obvious point that more Democrat insiders in Washington, DC are likely realizing and admitting that Joe Biden does not have the cognitive ability to be trusted with sole control over the nation’s nukes. Such an action as this would never happen unless it had the backing of powerful figures within the Democratic party. It does raise obvious questions such as: How bad is Biden’s cognitive decline that such an extreme action is being proposed? This cannot be characterized as “just politics” because it is elected members of Biden’s own party that are taking this action! The fourth link adds that the action proposed by the Democrats participating in this process is to have a committee of elected officials  controlling and authorizing the use of nuclear weapons. It suggests that the Vice-President and Speaker of the House share authority over nuclear weapons. Does the idea of VP Kamala Harris and Speaker Nancy Pelosi having their fingers on the nuclear button disturb you?

Quite apart from the clear case that can be made that the US Constitution would not allow for such an action (only the President is the Commander-in-Chief of US military forces), a committee-style control over nuclear weapons would make it easier for any enemy to attack the USA. If such a blurred control of US nukes was in place, an enemy need only assassinate or kidnap the Vice-President, the Speaker of the House and any one else in a “committee” to control nuclear weapons to stop the USA from retaliating. Also, if an enemy launched a nuclear strike vs. the USA, whoever is president has mere seconds or a few minutes to take appropriate action on launching US nuclear retaliation attacks before an enemy attack takes out America’s ability to fight back. There is no time for any “committee” to meet and take action under such circumstances–especially if an enemy has taken down US communications systems as part of the attack (a virtual certainty in any such attack).

Allow me to speculate on what might be happening behind the veil so to speak. Issues about Biden’s declining cognitive abilities were raised throughout the US presidential campaign by some media sources, but the Leftist establishment media blinded their eyes to all such evidence and withheld such evidence from the public. Perhaps the plan was to let Joe Biden serve as largely a figurehead president while others really “called the shots,” telling Biden “where to sign” on documents and “what to say” on his teleprompter recitations. Maybe Biden’s handlers thought he could last a year or two in such a role. However, that about three dozen Democrat congressional representatives have taken the extraordinary action of trying to wrest sole control over US nuclear weapons from Biden’s hands argues that Biden’s cognitive decline is now so advanced that such dramatic measures as this need to be taken already. That even elected Democrats want to take control of America’s nukes away from Biden strongly argues they view him as unfit for office. This action is likely being done with the approval of Vice President Kamala Harris, who likely is eager to take the reins of power and impose even more draconian Leftist oppressions on the American nation (after all, she did run against Biden in the Democrat primaries to be the nominee herself). Indeed, VP Harris is already showing signs of acting as if she is the de-facto president. The fifth link relates how VP Harris, not President Biden, is personally speaking with a number of foreign heads-of-state in behalf of the new administration. Normally, this would be a huge affront to any newly-elected president, but Harris does not seem to grasp how presumptuous her action is and, apparently, neither does Biden.

Just what is the level of Biden’s current cognitive abilities? The sixth link shows a recent example of how deteriorated his mental condition has become. In a speech, Biden became incoherent and could not form organized sentences. Please watch the video in the sixth link–if such a video as this had been shown to the American people before the election, Biden would not have been elected president. Indeed, he exhibits such marked cognitive decline on this video-clip that he couldn’t even effectively serve on a local school board. Seeing someone in a state of cognitive decline this advanced is hard to watch. Many people have had to care for loved ones experiencing the decline of dementia or Alzheimer’s Disease, and I personally know what that is like. My mother died of Alzheimer’s Disease at age 92 a few years ago, and she was in a state of gradual decline for many years. It was difficult for my siblings and I to watch her lose her cognitive abilities, finally select a cognitive care nursing home for her, etc. The video in the sixth link argues the loved ones of Joe Biden will soon be dealing with such decisions. However, there is a huge difference between the cognitive decline of my mother and Joe Biden’s cognitive decline. My mother did not have the ability to launch America’s nuclear weapons. Seeing the video in the sixth link makes me conclude that Section 4 of the 25th Amendment of the U.S. Constitution may need to be invoked to remove Biden from office. If that happens there could be huge negative ramifications to the Democrat party because everyone all over the nation and the world will realize that they hid from the electorate the serious cognitive decline of their presidential nominee.

If Kamala Harris became president, the vice-presidential office would become vacant and a new person would need to be named by Harris to be the new vice-president and the nominee would have to be approved by Congress. The situation would be like the one in the 1970s when President Nixon resigned and VP Gerald Ford became president. Ford then named Nelson Rockefeller to be the new vice-president who was then “one heartbeat away” from the oval office. After Rockefeller was the Vice-President, two female assassins failed to kill President Ford (seventh link) even though they were close to him with guns (one bullet reportedly missed Ford’s head by mere inches and the other female assassin reportedly forgot to load her weapon). Their lack of skill with firearms is the only reason we did not have a President Nelson Rockefeller. Who would a President Kamala Harris name as her choice for a new vice-president to be “one heartbeat away” from the oval office? One could argue that it should logically be one of the other contenders for the presidency in the most recent Democratic primary season, but I’d bet Hillary Clinton would surely love to be “one heartbeat away” from the presidency without having to bother with campaigning for the office.

The Apostle Paul prophesied in II Timothy 3:1 that in the latter days, “perilous times shall come.” He had no idea how right he would be.