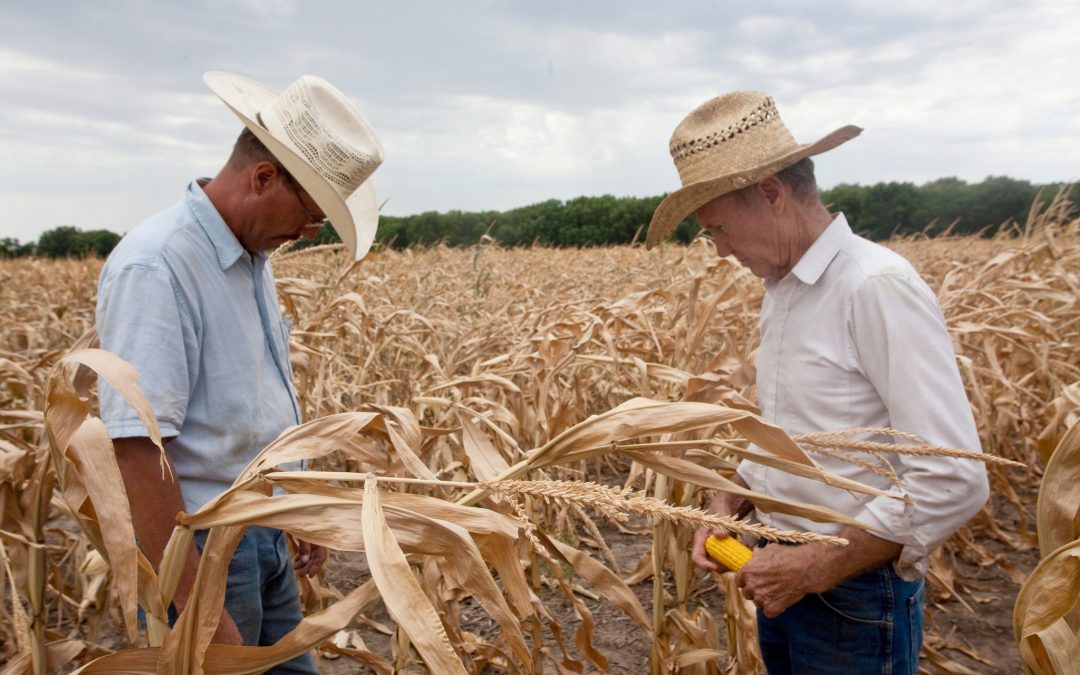 The first link is on the technical side, but I want you to notice the early comments that says corn, wheat and soybeans price are hitting 8-year highs. The second link reports that estimated corn and soybean plantings for 2021 predict there will be less acreage planted in spite of much higher prices. This doesn’t seem possible as one would assume that if prices are very high, farmers would be planting crops “fence line-to-fence line.” The second link fails to mention the primary reason why farmers will be planting less crop acreage even though grain prices are high. The one word answer is: “water.” It does not matter how much seed you place in the ground; if there is not enough water in the soil to produce a meaningful crop, there is no point in planting anything. Farmers who have access to irrigated water supplies will have a banner year, but many in dry-land farming regions who do not have such access will not plant crops in drought-affected regions of the nations. We will examine the worsening drought conditions in a moment, but first I want to give you three quick charts (third link, fourth link and fifth link) that document the skyrocketing cash prices for corn, wheat and soybeans. On each page, click on the “5Y” chart option to show the five-year price chart for each grain price. You will see that corn has advanced from about $4/bushel to $6.65/bushel in about a half-year. Soybeans have gone from $7.69/bushel in 2018 to a close of $15.52/bushel recently. Wheat has risen from $4.56/bushel to $7.37/bushel since August, 2019. These are huge percentage increases, and they will affect food prices far more than just the cost for corn oil, soy foods and bread products. For example, much corn is fed to livestock so it means all meat products will also head considerably higher in price.

Why are prices rising so fast? The answer is that global production of all food grains is dropping steadily, and droughts are worsening. The sixth link shows the latest American drought monitor map, and it reveals the western half of the United States is in a persistent and severe drought. Indeed, it shows seven states (California, Nevada, Utah, Colorado, Arizona, New Mexico and Texas) had portions of their state in the worst possible category of “exceptional drought.” Much of the West is in “extreme” or “severe” drought classifications. Notice the vegetable-producing region in the San Joaquin Valley of California is gripped in “extreme” drought. The West is historically dry, and very bad droughts mean no crop will grow unless farmers have access to irrigation water. In California, water allocations to farmers are very important and they have to compete for diminished water supplies with commercial, industrial, environmental and recreational usages. It is so dry that if farmers’ irrigation water allocations are cut or terminated, nothing gets planted. This means the fresh vegetables and fruit you expect in grocery stores will be in shorter supply, and what is available may be of lower quality and cost more. Southwestern states have long had “water wars” over rights to Colorado River and water reservoir supplies; however, water wars are now occurring where you would not expect them to happen. Northern California and Oregon are in such a severe drought that they are witnessing unprecedented fights over water rights (seventh link). Oregon farmers are cited as receiving only 8% of their usual water allocations! Does that mean a 92% drop in food production in the affected areas? Oregon is considering doubling the rate at which groundwater is depleted to boost irrigation water, but that is a very short-term solution which makes the long-term prospects even worse due to reduced ground water supplies. To highlight the severity of the drought, 15,000 people formed a “bucket brigade” to move water from the depleted Klamath River to a water reservoir that is drying up. You should have seen that scene on the Evening News, but I’ll bet you didn’t. No doubt, the establishment doesn’t want the general public to get alarmed about the worsening consequences of this historic drought.

Expect regions which have surplus water to have demands made upon that water by “dry” regions, and expect those demands to be resisted by the water-rich areas. It is already happening, In Minnesota, one county has passed a law forbidding water from their county to be transported to the drought-hit states in the American Southwest (eighth link). If the rains don’t come in a major way, expect these water wars to become much more contentious.

If the USA has a severe drought which threatens food production, does this mean Mexico (which produces a lot of foodstuffs shipped to the USA) will be able to make up for the shortfall? The short answer is “No.” As the ninth link reveals, Mexico is being hit by drought just as hard as the USA! Drought conditions now have spread over 85% of the nation of Mexico, and its lakes and reservoirs are going dry. Mexico’s second-largest lake is now 75% dried up! Mexico City’s water supply is also threatened. Mexico may be challenged to produce enough food for itself, meaning its food exports to the USA will dry up as well.

It is not just North America that is in drought, Other parts of the world are hit hard by water shortages as well. One such place is Taiwan, which is experiencing its worst drought in 50 years (tenth link). The link addresses the competition for dwindling water supplies between human and industrial needs. You may have read in the financial press that there is a semi-conductor shortage throughout the world. This article notes that Taiwan has “more than 90% of the world’s manufacturing capacity for the most advanced [computer] chips…” The world is screaming for more computer chips from Taiwan but the shortage in that product may grow worse because at some point, Taiwan will have to divert water to feed its people rather than send water to the high-tech factories of Intel, Apple, etc. At least Taiwan has constructed a water desalinization plant to produce more water, but the water shortages continue. Without sufficient numbers of computer chips, many industrial/high-tech products will be in short supply–a way that the worsening droughts will affect all non-agricultural financial markets too.

While droughts have been repetitive weather events that are a part of the earth’s normal climate cycles, it was prophesied in Matthew 24:7 that “famines” (the primary effect of droughts) will especially characterize the latter days just before this current human age climaxes with the return of Jesus Christ. Revelation 6 contains the prophecy about the “four horsemen of the apocalypse,” and one of those horseman rides a black horse which represents food shortages. Verses 5-6 describe circumstances where food supplies are being safeguarded and foodstuffs are rationed by price. The meteoric price increases in the grain markets and the worsening droughts both act to fulfill this prophecy. All the supply chains of the global markets are now being threatened by chronic conditions such as truck-driver shortages, factory shut-downs due to covid-afflicted work forces, and even singular events like the prolonged stoppage of the world’s merchant ships due to one ship becoming grounded in the Suez Canal. If water shortages and food shortages continue to spread, at some point governments of food-producing nations will inevitably block food exports in order to feed their own people. That is when nations needing food will likely resort to wars to seize the food supplies their people need. In an all-out famine, normal relationships between nations and people will deteriorate into conflicts. “Wars and rumors of wars” will also characterize the latter days of our age (Matthew 24:7), and some of these wars may be caused by food shortages.

What the nations will eventually be forced to see is that there is that there is a Creator God who controls the weather and everything about the world’s climate. God promises “rain in due season” and good food supplies to righteous nations that obey him (Deuteronomy 11:13-15), but he warns he will send severe droughts and food shortages to nations that rebel against his good laws and disobey him (Deuteronomy 28:20-24). Hmm. The nations are experiencing worsening droughts, diseases, food shortages, etc. Are the nations disobeying God to an ever-greater degree? The obvious answer is “Yes.” Indeed, favoring and encouraging perversions and sins of all kinds is now the state policy of many governments. If there is a Creator God, these blatant national sins should bring on worsening droughts, diseases, food shortages, etc.,…and that is exactly what is happening. As national sins get worse, expect these national “plagues” to get worse as well. The solution is for nations and people to repent to the Creator God and forsake their national and personal sins. However, the nations don’t think God is real any longer. Are they ever in for a rude shock in the years ahead of us as biblical prophecies get fulfilled!

For those readers who desire more evidence that we are living in the biblical end-times, please read my article, Are We Living in the Biblical Latter Days? For those who wish to see a biblically-based discussion of what God advises people to do in such evil times, I suggest reading my article, Should Christians Prepare for Future Hard Times? While this article is addressed to Christians, the content applies equally to all people regardless of their faith of belief systems.