Could Mysterious Ancient Ruins in Peru Be Carthaginian in Origin? 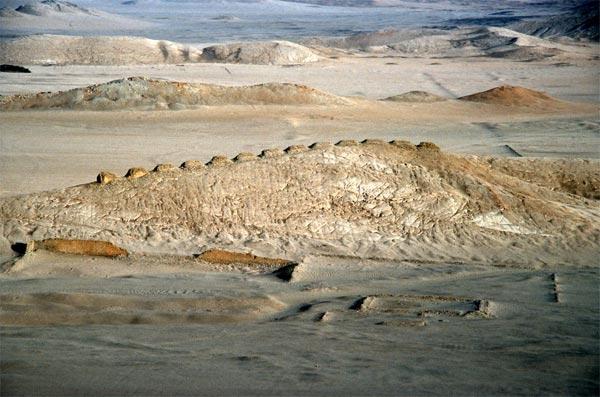 Night before last, I watched an episode of a program on the Science TV channel called “What on Earth.” It is a program that examines mysteries that have been located or found via satellite photographs of the earth’s surface. One of the segments on last night’s program involved a detailed discussion of mysterious ruins found at Chankillo, Peru. Scientists have been unable to determine who built these sophisticated ancient walls and structures–at least some of which have been determined to be oriented to note the observance of the winter solstice. As I watched the program, I noticed two facts which gave me an idea of who built these ruins and why they built them.

The program mentioned and prominently featured the fact that 13 large, similar stone structures were built in a row at this site, and that archaeologists have dated the construction of the site to approximately 300 BC. The ruins include a fortified site with two outer walls encompassing an inner site with temples or ceremonial sites, so the builders of the site had very sophisticated construction and engineering skills. The first link, second link and third link offer differing perspectives on these ruins, and the first site includes good photographs of the ruins and the aligned 13 stone structures. The links also indicate that the ruins were built some time during the 4th century BC, not necessarily at 300 BC. The fourth link discusses the “What on Earth” program at the Science Channel’s website. The aforementioned episode should be available for viewing at that website before too much time passes.

My informed theory is that the ruins at this site were built by Carthaginians who were first extensively exploring the New World and looking for mining opportunities to exploit, and later to locate fortifications for Carthaginians who were fleeing North Africa during the series of Punic Wars which Carthage eventually lost to Rome after Carthage’s famous general, Hannibal, almost destroyed the Roman Empire in its formative stages.

As my books, The “Lost” Ten Tribes of Israel…Found!, and Israel’s Lost Empires, document in great detail, the Carthaginians had extensive colonization and mining operations in the Americas during their heyday. The Romans (who were Carthage’s enemies) gave them the name “Carthaginians.” The Carthaginians never called themselves by that name. Their name for their city of Carthage was Kirjath Hadeshath, a Hebrew name meaning “New City” or “New Town.” The Carthaginians were also called the Western Phoenicians in some historical accounts because they were founded as a colony by the former Phoenician Empire, which had its glory days around 1000 BC. It has long been known that the language of Carthage was Hebrew, although the Carthaginians developed a new script of their own. The fifth link and sixth link detail an old Phoenician coin which depicts a map of the world which includes a limited image of North America with its interior riverine waterways. The ancient Greeks (also enemies of Carthage) record that the Phoenician/Carthaginian civilizations had extensively explored a great “island” across the Atlantic Ocean which had interior navigable interior rivers, lush forests, much game, etc. This aptly describes North America. Carthage was known as one of the richest cities in the Old World, and much of its wealth came from the fact that it had a monopoly on the wealth and resources of the Americas. During the centuries of its heyday, Carthage had the power to prevent Greek and Roman vessels from exiting the Mediterranean Sea via the Carthaginian control of the pillars of Hercules (Gibraltar).

The “Phoenician” Empire was the Israelite Empire discussed in the Bible’s narratives. It began its most powerful period during the alliance formed between King Hiram of Tyre and Kings David and Solomon of the then-united Kingdom of Israel (II Samuel 5:11-12, I Kings 5, 9-10). The Phoenicians never called themselves by that name either, but we know them by that name as that is what the Greeks called them, and we have received our secular accounts of them via the Greco-Roman world. Much of the copper and iron raw materials amassed by David for the Temple that Solomon later built came from the Americas (I Chronicles 22:1-5), as is documented in my books from secular historical sources. The copper came from the ancient Great Lakes copper mines in North America and much of the iron came from South America. Even today a great iron ore rich nation in South America is still known by its Hebrew/Israelite name. Ancient Hebrew used consonants for its words (vowels could vary), and the consonants of the Hebrew word for iron are B-R-Z-L–the consonants of the modern nation of Brazil. King Solomon, the king of the Phoenician Empire at its zenith, mentioned the oceanic trade winds that were used by the Phoenician (and later Carthaginian) sailors when making transoceanic voyages (Ecclesiastes 1:6). The Carthaginians inherited all of the Phoenician’s oceanic navigational knowledge and maritime maps and overseas colonies when the Israelite kingdom fell. There is so much information on these subjects in my books, but I’ll offer just a few biblical glimpses into what the Phoenician Israelites knew about global geography. Job 26:7 records that biblical Israelite authors knew the earth was a globe in the middle of the empty ether of space, and Isaiah 40:22 refers to the “circle of the earth,” an obvious reference to the fact that they knew the earth was round. It was the Greeks and Romans who were unaware the world was round for so long because the Phoenician and Carthaginian fleets kept the Greeks and Romans out of the world’s oceans due to the Israelite/Phoenician and Carthaginian control of Gibraltar. Job 38:22, 29-30 record that in Job’s lifetime, the Hebrews knew about the polar icecaps where the oceans were frozen and hard as stone. Obviously, they couldn’t know that fact unless their fleets had ventured to the polar ice caps in their global exploration efforts.

The above brief mention of some of the information that is in my books document that the Carthaginians were abundantly aware of and had extensively explored the Americas. The ruins at Chankillo, Peru were reportedly built in the 4th century BC, when Carthage’s empire was still very strong. The city of Carthage had immense walls and stone structures, and the Carthaginians could easily have built the stone fortifications, buildings, walls and the mysterious 13 aligned stone structures at Chankillo. In the 4th century BC, Carthage was powerful and present in the Americas in many locations, so they are an obvious contender for building the Chankillo site.

Now let’s consider the significance of the 13 closely-aligned stone structures. The number 13 was obviously very important to the builders of these ancient Peruvian ruins. This fact also points to an Israelite/Carthaginian origin for two reasons. First, as a primary Mediterranean colony of the Israelite/Phoenician Empire, Carthage’s people knew they originated from the 13 tribes of Israel. The original 12 tribes of Israel became 13 tribes when the tribe of Joseph was subdivided into two tribes in Genesis 48:8-20, making them the “13 tribes of Israel” from then on. The eventual northern kingdom of Israel had ten tribes and the southern kingdom of Judah had 3 tribes (Judah, Benjamin and Levi). The 13 stone structures at this mysterious Peruvian complex could have commemorated their Israelite tribal origins. There is another reason why the number 13 points to an Israelite/Hebrew origin (which was Carthage’s origin). The Hebrew calendar was a lunar-solar calendar and its normal year of 12 months had to periodically include an extra 13th month to keep it synchronized with the solar cycle. The fact that these 13 stone structures were aligned in a row in an elevated position argues that they may have had an observable calendar calibration function to determine via sun and moon movements when a 13th month had to be added to a year in their calendar. The additional fact that the builders of the Chankillo ruins were sun-worshipers who could build their large structures to be oriented to determine the timing of the winter solstice supports the view that these 13 stone structures were a calendar calibration system to know in which years a 13th month should be added to their calendar. The additional fact that they were Baal/sun worshipers who apparently practiced human sacrifice also cements their linkage to Carthage as the Carthaginians were Baal/sun worshipers who also practiced human sacrifice.

As my books make clear, when the northern kingdom of Israel fell, those who had determined to seek God and forsake idolatrous ways and serve God more properly abandoned the old Promised Land and migrated into the Black Sea region and became known as Sacae, Scythians or Goths. The Greeks recorded that these Scythians had excellent and wise laws which absolutely forbade idolatry and they also refused to allow swine in their lands. The Israelites who wanted to cling to Baal worship migrated to Carthage and other Mediterranean colonies of the old Israelite kingdom.

My theory is that (A) since the Peruvian builders of the Chankillo ruins had excellent building and archeoastronomy skills, had an innate connection to the number 13 and were sun-worshipers who practiced human sacrifice, and (B) since the ancient Carthaginian Israelites had immense building and archeoastronomy skills, had a clear attachment to the number 13 and were sun/Baal-worshipers when Chankillo was founded, and since Carthage was heavily involved in the sailing routes between the Old and new World when Chankillo was founded, that the Chankillo builders were Carthaginians. They would logically have built fortresses and walls to protect themselves from native populations. Why did they die out? Either they relocated as the Chankillo location became untenable due to climate or warfare reasons, or they died out as their society rotted from within. As Baal/sun-worshipers, their culture would have included murdering their own genetic bloodlines with human sacrifices and their sun-worship practices surely included fertility rites which would have caused moral degeneracy and STDs to spread ever-more rapidly in their population–weakening their family structures and causing many premature deaths within their breeding-age population. Either or both factors could have lead to their eventual demise.