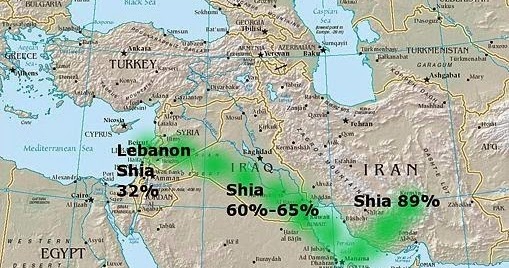 As many readers know, I’ve been mentioning in posts for some time that the key to the Mideast’s immediate future is having a Sunni blocking force in eastern Syria and western Iraq to prevent a land corridor under the dominance of Shiite Iran which would stretch from Iran to the Mediterranean Sea. A prominent Israeli media source has also published an article warning about this same urgent need to stop this Shiite corridor from forming (see link).

The link correctly notes the need for urgent Sunni actions to stop this Shiite/Iranian corridor from forming; however, I think it pins its hopes of Sunni action on two ephemeral hopes. It opines that if the ISIS forces are truly Sunni, then they could perhaps be convinced to lay down their arms and give control of their territory to Sunni forces without a fight. I think that is a most unlikely outcome. ISIS long ago ceased to be rational and one cannot expect rational actions from them. Their second hope lies in convincing Russia that a Shiite corridor is a bad idea for Russian interests. I think that argument will be viewed with amusement in Moscow. Iran is Russia’s ally. I think Russia’s position would be “what is good for our ally is good for Russia.” Iran is dependent on Russia for its modern air defense systems and its maintenance as well as for many other things. Iran will continue to need Russia even if a Shiite corridor if established.

To prevent that Shiite corridor from forming, the Sunni alliance must move aggressively now while they have a window of time to do so. The joint US-Jordanian-Saudi and allied forces on the Syrian-Jordanian border should move northward now to occupy and control southeast Syria. The Sunni tribal forces fighting alongside Kurdish and some Christian militias should move to take the ISIS-controlled city of Raqqa and its surrounding region as soon as possible. It is in the north that the situation is bizarre. Rather than be an ally to its fellow Sunni governments, the Sunni government of Turkey has actually assisted ISIS by bombing the forces attacking ISIS just because there were Kurds in those forces.

If Turkey joined the American, Kurdish and Sunni tribal forces attacking Raqqa, the Sunnis would surely succeed in creating a Sunni-controlled region to block the Shiite land corridor plan. I’m pretty sure that President Trump made that very clear to Turkish President Erdogan when the latter visited the USA a few days ago. President Trump is being given an awesome hero’s welcome in Saudi Arabia as I write this post. He is meeting there not only with the Saudi government leaders, but the leaders of many other Sunni nations as well. Behind the scenes of this perhaps unprecedented welcome for a foreign head of-state in Riyadh, I’m sure efforts were being made to create a united Sunni bloc to act to stop the Shiite land corridor from forming. An Iranian Shiite land corridor would split the Sunni nations into two portions. If it were established, the Sunni Turks and Kurds would be on the north side of that corridor and the Saudis, their Gulf allies, Jordan and Egypt would be on the south side. Such a land corridor would give the the Iranian Shiites geopolitical dominance in the Mideast.

Even thought the US Leftist media is doing all it can to attack and undermine President Trump, Trump is doing exactly what he should do to promote American interests in the Mideast and abroad. Blocking and weakening the position of Iran is a vital American interest and that coincides with Sunni and Israeli interests. President Obama all too frequently favored the Iranian Shiite position during his administration even as the Iranians periodically trampled US flags and shouted “Death to America!” Thankfully, Obama is out of office, and we have now have an American President that understands America’s vital interests in the world and the urgent need to close ranks with traditional allies.

Stopping a Shiite land corridor from Iran to Syria is also vital to vital interests. If Iran creates a Shiite land corridor to the borders of Israel, it can move Iranian heavy weaponry and Iranian armies right up to Israel’s northern border and seek to “wipe Israel off the map” just as it has proclaimed it intends to do. Israel, the Sunnis and the Americans all share a common need to thwart the grand power grab by Iran (and its allies) and act together to stop it. If Iran can create a Shiite land corridor all the way to Syria, it almost surely will move its forces to Israel’s border to prepare for a war of annihilation vs. Israel. Israel would have to take major military action to stop Iran from ever amassing these forces on Israel’s border. Therefore, failing to stop an Iranian/Shiite land corridor will almost certainly lead to a major Mideast war. The stakes really are that high. We’ll soon see if the Sunni nations can act in a coordinated manner to act in their own combined interests to stop that Iranian Shiite land corridor from forming.