CONGOLESE EBOLA PLAGUE SPREADS TO UGANDA; WHERE WILL IT GO NEXT? 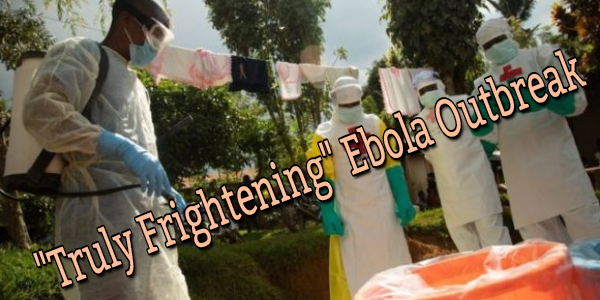 In late April, I posted about what was termed the “second worst Ebola outbreak” in history that had broken out in the Democratic Republic of the Congo (DRC). In that post, I noted that given the extent of the Ebola outbreak, the World Health Organization (WHO) was acting rather lackadaisical about containing the epidemic by refusing to issue a public health emergency notice (first link). Such a health notice would cause stricter measures to be taken around the world in examining passengers and migrants arriving from the nations and regions suffering from an Ebola outbreak. The thinking at the time seemed to indicate the WHO did not want to issue a global emergency notice until the Ebola outbreak spread to another nation.

The Ebola outbreak has now spread to the nation of Uganda and it has killed two people in one family plus infected a third person in that family. The BBC is reporting that six other Ugandans may have the disease and that another 30 people have likely been exposed to it (second link). The WHO is still refusing to issue a public health emergency notice, and it is currently not scheduled to even consider issuing an emergency notice until its next meeting in mid-June. The second link also reports the death total is now up to 1,400 in the DRC and that the death rate for infected people in at 70%. The second link reports that “medical observers” had expected the WHO to declare a public emergency after the Ebola outbreak spread to a second nation, and that surrounding nations such as Uganda, South Sudan, Rwanda, and Burundi were stepping up preventive measures to prevent Ebola from spreading into their nations (third link). One way they are doing that is “intensifying their border surveillance.” It makes obvious sense that no nation wants dangerous diseases to spread into their nation from Ebola-affected nations and that border control measures are appropriate. The fourth link adds commentary about the surprise that medical experts felt when the WHO did not issue a global health alert even though the WHO acknowledges that “there’s a risk of international spread [of the Ebola outbreak.]”

Clearly, the risk of Ebola spreading to other nations is greatest when people from infected nations travel to other nations by air, land or sea. They can spread the disease to others even if they are in the early asymptomatic phases of their infection. Where might the Ebola virus spread to next? One place that is now under heightened risk is…San Antonio, Texas because Congolese immigrants have been coming into that city. Syndicated columnist, Tammy Bruce, warned that larger groups of illegal African immigrants are being apprehended as they enter the USA from Mexico and some illegals are from the Congo–where Ebola has taken hold (fifth link). She further warns that illegal aliens pose health risks to Americans as they bring with them a range of diseases from their nations of origin. The sixth link asserts that over 350 Congolese immigrants showed up in San Antonio and there was a great difficulty finding enough French-speaking translators to communicate with them. It also reports that San Antonio officials tried to send them to Portland, ME, but that city didn’t want them. The seventh link states that these Congolese migrants are reaching the USA via Brazil and Central America. San Antonio’s city officials are assuring people that Ebola couldn’t be present among the people they have screened (eighth link), but the real danger is that Ebola could reach the USA via infected Congolese people who enter the USA illegally via the Mexican border and spread throughout the USA without any border screenings or medical checks whatsoever. Indeed, given how many millions of illegal immigrants are reaching the USA or Europe, the danger is rising that any of them could be carrying Ebola or some other disease that they could contract from infected people traveling along the same illegal migratory routes.

I’m sure readers have seen the many media reports of boat people trying to enter Europe illegally via the Mediterranean Sea route. How many recent arrivals are from the Congo or Uganda where Ebola is present? Are they all being screened and held in quarantine to be sure they do not manifest symptoms of the disease? One thing is for sure: in the USA, the entire nation knows that it is the Democratic Party and political Leftists who have done everything possible to prevent President Trump from instituting serious border control and protective measures. If an Ebola outbreak does erupt anywhere in the USA, everyone will know that the Leftists are responsible for the porous borders that allowed infected individuals to enter the nation. In Europe, it is the globalists who have allowed hosts of illegal immigrants to enter Europe. How many recent immigrants are fleeing to Europe specifically to flee from the Ebola-infected region? If Europe experiences an Ebola outbreak due to infected individuals arriving from Africa, Europeans will know who to blame.

I very much hope that we are “lucky” and that no infected migrants arriving anywhere in the world from the infected region of Africa are carrying the Ebola virus. However, nations should not rely on “luck” to keep them safe. Ebola can easily spread to other nations via people traveling on airplanes, trains, buses and maritime routes. If the WHO continues to turn mostly a blind eye to the potential risk of a global epidemic, it seems likely that it is only a matter of time until more nations begin to experience Ebola outbreaks.

There are biblically prophetic ramifications to this story. It is, biblically demonstratable, that we are living in a period of time at the end of our age called “the latter days” or “time of the end” in biblical prophecies. Matthew 24:7 foretells that “pestilences” will become a global phenomenon at the end of our age. Many biblical observers see pestilences (disease plagues) as being included in the pale horse in Revelation 6:1-8’s prophecy about the four horsemen of the apocalypse. The rapid increase in illegal and non-medically-screened immigration around the world hastens the likelihood that a disease epidemic could spread quickly and widely across the globe. For clear evidence that we are, indeed, living in the biblically-prophesied latter days, please read my free article, Are We Living in the Biblical Latter Days? In a truly global plague or disease outbreak, travel between nations will be tightly regulated and intensely screened. Normal transportation systems for the distribution of food, medicine, and other vital commodities and supplies could be disrupted. Airline pilots, train engineers, and bus drivers may refuse to enter nations or regions severely affected by a major plague. You need to prepare now for such a time as the Bible indicates they will come to pass in the latter days. For a common-sense, reasonable approach to making preparations for hard times, please read my free article, Should Christians Prepare for Future Hard Times? However, the suggestions presented in that article are applicable to all people, not just Christians. When the very difficult times prophesied in the Bible arrive on the global scene, most people will be taken by surprise, but you need not be among the unprepared.