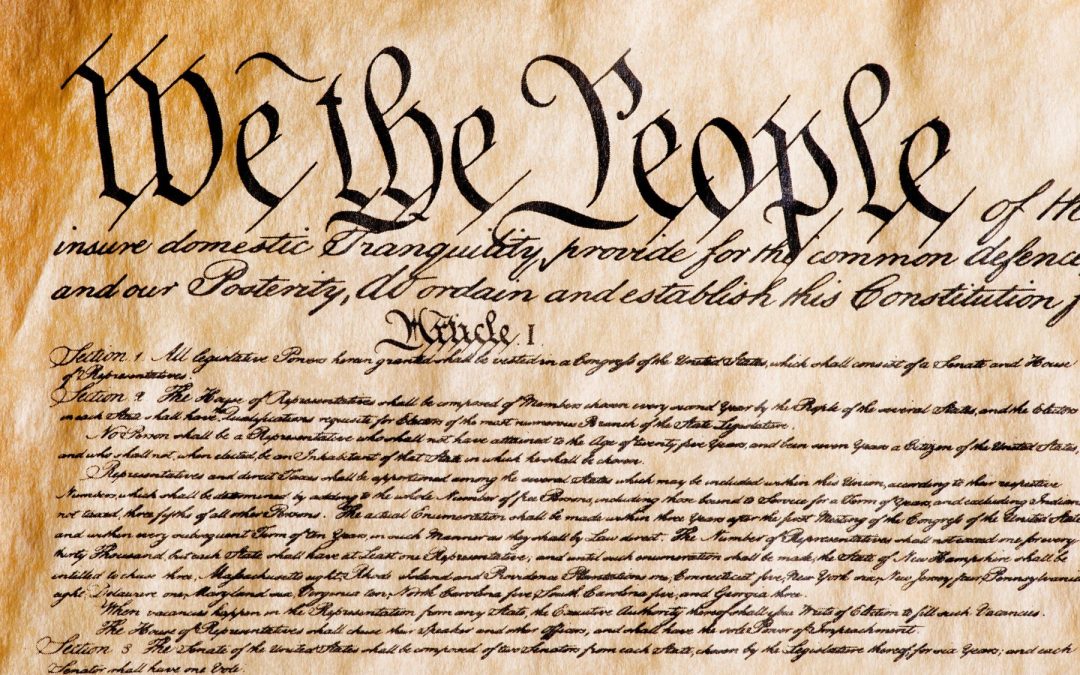 This post will offer my initial reactions to the stunning news that the US Supreme Court (SCOTUS) may soon reverse the famous Roe v. Wade decision which imposed “a right to an abortion” on all 50 American states even though the subject of abortion isn’t found anywhere in the US Constitution. This fact came to public attention when an apparently illegal leak from a SCOTUS staffer revealed that five Justices had signed a preliminary opinion in an abortion case which would reverse the Roe v. Wade decision. This post will also include some comments on an obscure biblical prophecy which may have applicability to this matter.

Consitutionalists have long asserted, correctly, that a “right to an abortion” can be found nowhere in the language of the Constitution. Indeed, the topic of abortion isn’t even hinted at in the Constitution. When Roe v. Wade was initially released, one SCOTUS member who voted for the Roe v. Wade decision, Judge William O. Douglas, publicly admitted as much when he said the “right to an abortion” was not found in the Constitution but that it was somewhere in the “penumbra” of the Constitution. The Roe v. Wade decision was a clear example of a court “legislating from the bench,” ( i.e. usurping legislative authority by imposing a new law that Congress had never passed). [Interestingly, when I did a web search and found a link about Judge Douglas’ statement to include in this post, a “scam” program took over my computer screen with bizarre messages and hijacked my computer’s speakers to give me new “instructions.”]

When I was in elementary school, we had a required Civics class which included a study of the US Constitution. I strongly suggest that if you have not actually read the US Constitution that you do so as soon as possible. It was written so clearly that any High School graduate will have no problem understanding it. It was a document which represented many compromises among the delegates from the original colonies which had become the states of the new United States of America. Each state had a unique history as a colony and they had varying cultures, economies, etc. None of the new states wanted a domineering federal government so they strictly limited it in the US Constitution. They delegated (or “enumerated”) to the federal government a limited numbers of essential powers to make the states a unified nation. These delegated powers were conducting foreign policy, waging war and providing for the security of the nation, taxing powers and little else. To make sure the federal government stayed small in scope, the Tenth Amendment of the Bill of Rights stated that any powers not specifically delegated to the federal government in the Constitution were “reserved to the states, respectively, or to the people.” If you read the Constitution, you will find that the overall category of “Family Law” was never mentioned or even hinted at in the powers granted to the federal government.  Family Law would include such topics as marriage, abortion, adoptions, divorces, etc. Indeed, the various American states have long had widely-different laws about marriages in their states’ legal codes. Some had waiting periods for a marriage license and some didn’t. Some required blood tests and some didn’t. Some had long waiting periods for a divorce and some had very short residency requirements to obtain a divorce. These differences showed that all aspects of Family Law were being decided by each of the 50 states; for two centuries the federal government realized it had no “say” in any such laws. The Roe v. Wade decision essentially made a bizarre argument: that the Constitution was itself unconstitutional in denying people in all 50 states the right to an abortion.

I read a front-page article in the May 5, 2022 Minneapolis Star-Tribune by Michael Macagnone entitled “Domino effect seem in Roe draft” which addressed some of these constitutional issues. The article originated with Congressional Quarterly–Roll Call. I tried to find it on the Internet and couldn’t find it anywhere. Maybe you can. It refers to the Roe v. Wade decision as “Judge-made law,” and states that Row v. Wade was an example of “When the Supreme Court creates a right not even mentioned in the Constitution.” The article notes that if the Supreme Court formally issues the draft opinion as its final ruling, it could also mean that other “judge-made” federal laws such as “same-sex marriage” may also be reversed. Keep in mind that if the preliminary draft opinion is the final ruling, it will not end abortion in America and it will not end same-sex marriages. What it will do is give back to the states what was rightfully theirs all along: The ability to make Family Law which is binding in each individual state. If this puts Family Law back in the states’ domain, some states will abolish abortion altogether, others will abolish it for all but a few limited exceptions, and some will make it available in any circumstance. The same would apply to same-sex marriages in a possible future case decision. Some states will allow it and others will make it illegal.

I will conclude by discussing a little-noticed prophecy for the latter-days which may apply to the Roe v. Wade matter and the entire spectrum of constitutional federal powers. Genesis 48-49 has a series of prophecies for each of the 12 tribes of Israel that will be fulfilled in the latter days of our current age (Genesis 49:1). I utilized these prophecies a great deal in my book series about the history and modern locations of the so-called “lost ten tribes of Israel.” The tribe of Joseph was divided into two tribes: Ephraim and Manasseh. They were to be “brother tribes” which were to grow together into a multitude in the earth (Genesis 48:16) so their aggregate populations will have to be large and it is logical they will have a common culture, language, etc. Ephraim was prophesied to be “a multitude of nations” and Manasseh was prophesied to be a single nation (verses 17-20). The tribes of Ephraim and Manasseh inherited the “birthright blessing” which previously had passed from Abraham to Isaac to Jacob, the father of Joseph. This birthright blessing included large populations, having control of strategic geographical choke points, natural resources, good soil, victories in wars, etc. A brief look at these tribes is offered in the two links below, but for the sake of brevity, the tribe of Ephraim’s prophetic destiny identifies the modern nations of Great Britain, Canada, Australia and New Zealand as the “multitude of nations” comprising Ephraim and the USA was founded as Manasseh, the single great nation with a brother culture and language to the modern Ephraimite nations.

There are many prophecies in the Bible which identify the latter days of this age as a time of great wars, natural disasters such as increasing numbers of earthquakes, hurricanes, storms, droughts, major crises, etc., but there is one encouraging prophecy for the nations descended from Joseph–Ephraim and Manasseh–which will specifically apply to them in the latter days. Genesis 49:22-26 offers a prophecy about the tribe of Joseph (the modern nations descended from Ephraim and Manasseh) in the latter days. Verses 22-24 foretell that the tribes of Joseph will be hated and attacked by other nations or groups, but that God will make them strong against their attackers. Indeed, verses 24-26 lists some of the birthright blessings which God states will still be retained by the tribes of Joseph in the latter days. I have long thought that this is a prophecy about the eventual attack of the Gog-Magog alliance of Ezekiel 38-39 against the modern nations of the ten tribes of Israel and their allies and that is likely true. However, the Western Christian culture that made the USA, the UK, Canada, Australia and New Zealand blessed and great is already currently under attack in these nations from within. This attack is being waged by the Far Left and its allies. In bringing into existence a SCOTUS that is conservative enough to actually apply the US Constitution accurately, it may be that the Creator Being we call God is beginning to take action to prevent our nations from being completely undermined from within. Maybe God has said “Enough!” in heaven and is taking action in our temporal world to turn things around to make sure his promised and prophesied “birthright blessings” do not get stolen from his intended recipients. If God is involved in shaping a reversal of Roe v. Wade, God may take other actions to restore traditional Constitutional/Christian culture in the modern nations named above. However, a Roe v. Wade reversal would apply only to the USA, as only Manasseh is governed by the US Constitution. The Far Left will oppose God’s plans vehemently, but they cannot deter God’s will on any matter (Psalm 2:1-5). If you are among the people who wish God to restore strength and stability to the USA, include Genesis 49:22-26 in your prayers.

It will be interesting to see how this process unfolds. I may have more to say on this process in a future post depending on the SCOTUS decision which actually becomes final.