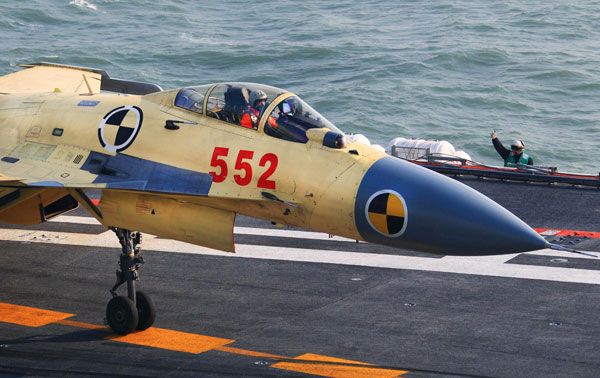 A huge development appears to be imminent in the Mideast. The first link, from the Serbian media, reports that China will soon be sending warplanes to the Mideast to help the Russian warplanes already attacking the foes of Syrian President Assad. It cites an Israeli media source as reporting that the Chinese warplanes will be operating from the Chinese aircraft carrier which recently arrived in Syrian waters after passing through the Suez Canal into the Mediterranean Sea. I’m sure that many intelligence services will be watching with keen interest to see how well Chinese naval pilots can conduct carrier operations. All Asian nations should be especially interested as the Chinese carrier personnel and the pilots are practicing in Syrian waters the operations they will be expected to perform in Asian theaters of war in the future.

The link also reports that the Iranian-aligned central government of Iraq is inviting Russia to base its warplanes in Iraq as well as in Syria, and that an agreement has already been made to give Russian warplanes a specific base of operations in Iraq. This will allow the Russians, in cooperation with their Chinese allies, to destroy the forces of Assad’s enemies in both Syria and Iraq. Even more importantly, Iraq is inviting Russia to deploy its ground troops into Iraq to help destroy ISIS forces. The link reports that a “joint Russian-Iranian-Syrian-Iraqi war room has been working since last week” in an Iraqi military facility. It would appear that China will soon have a seat at that table.

The second link adds an analysis that Russia is repeating in the Mideast what it did in the Ukraine when it annexed the Crimea and essentially absorbed parts of the Eastern provinces of the Ukraine as well.

Clearly, Russia, China and Iran are coming into the Mideast with much force to defeat the enemies of their local proxy/allies: Syria and Iraq. In the Iranian nuclear facilities treaty negotiated recently by the Obama administration, Obama has given tremendous assistance to all of America’s enemies as that agreement will release approximately $100 billion to Iran so it can build up its military forces and support terrorism all over the world. Under Obama, the USA is now in a “full retreat” mode.

What I have called the “Gog Magog alliance” for over 25 years is now acting in open cooperation to assert global dominance. They are currently active in the Mideast, but we can expect their global dominance efforts to expand in the future to other regions as well. Ezekiel 38-39 is now coming alive in global geopolitics right in front of our eyes. Sadly, few people pay any attention to biblical prophecy so they are missing the fact that current prophetic fulfillments are proving, beyond any shadow of a doubt, that there is a Creator God who authored the Bible’s prophecies and that he is acting to fulfill them in our latter day period of time. In Isaiah 41:21-26, God challenges everyone to look at his ability to fulfill his prophecies as proof of his reality and sovereignty. God is clearly revealing his reality and complete sovereignty over human affairs.

It is sad watching the growing rout of the USA and its allies in the Mideast. The USA conquered Iraq militarily, but the Obama administration and its outclassed diplomats have “lost the peace” and are handing over Iraq to Russia and its allies. Russia, China and Iran have seen that President Obama is incredibly weak as the leader of the West and they intend to seize as much territory and initiative as they can as long as they have a weakling like Obama in the White House. What is happening in the Mideast shows that Russia, China and Iran are treating Obama and the USA with growing contempt. They are doing whatever they want in the region and simply ignoring whatever limp protests come from Washington, DC. They see no reason to take Obama seriously on anything. The USA will desperately need a new tough-minded leader in the White House after the next presidential election to clean up Obama’s unprecedented messes. The entire world is watching the Russians take charge in the Mideast as Obama and his spineless advisers are paralyzed with indecision and inaction. That new strong-minded leader can’t come from the Democrat side as Hillary Clinton served as Obama’s Secretary of State in implementing his failed international policies. Joe Biden, if he finally jumps in the race, is equally unqualified as he has been Obama’s sidekick in a failed presidency.

In previous posts, I have noted that China has needed a regional war to get some real combat experience for its military and to test its new weaponry under combat conditions. It looks like the Chinese air force will soon be getting some combat experience in Syria and Iraq (alongside the Russians), and the Chinese navy will get practice using its carrier in combat operations. Is Obama ever going to do anything as the post World War II order collapses on his watch? As Russia and China assert their dominance in the Mideast, expect major ramifications in global oil, currency and commodity markets as well as new alliances being formed as nations, unable to trust the USA under Obama, need to find new allies.

Where will these developments end? The Bible gives us the answer in Ezekiel 38-39’s prophecy, which is being accurately shaped in modern geopolitics for its ultimate fulfillment. Those who have read my article, What Ezekiel 38-39 Reveal about a Future World War III, already know the prophesied outcome of our end time global chess game. If you have not done so, I strongly urge you to read it now as this 2500-year-old prophecy is being accurately fulfilled right now in our modern world. Ezekiel 38-39 really is “history written in advance,” a phrase I once heard in a sermon a very long time ago.

My thanks to a reader who sent me the first link!