CHINESE SPYING IN USA IS AN “EXISTENTIAL THREAT” 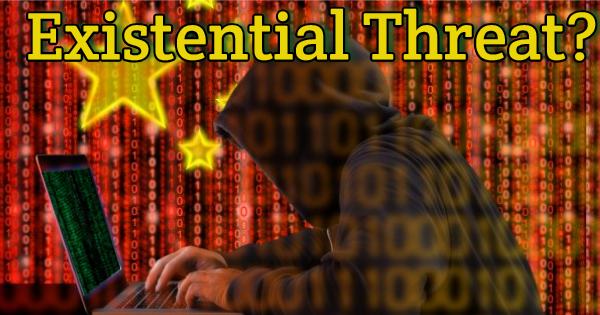 In what should be a surprise to no one, Attorney General Bill Barr recently declared that Chinese espionage vs. the United States constitutes an “existential threat” to our nation. He stated that China is using not only hacking technologies but also the recruitment of American scientists to spy for China and betray America. The article cites a spike in arrests of Chinese agents in the USA, and some of the arrests should surprise us all. One person arrested was a hospital researcher in Boston “accused of attempting to smuggle biological material from a laboratory to China” (first link). Hmm. What “laboratory material?” Given the revelation that the coronavirus originated in Wuhan, China which is also the site of China’s bio-hazard laboratory, it does beg the question of whether China was seeking a live sample of biological material that could be used in their biological weapons laboratory. I doubt China was interested in simply stealing a better quality of lab rats. Other individuals in key positions have been recruited in a “talent recruitment program” by China. In other words, China is actively looking for Americans in key positions who are willing to betray their own nation for money or some other inducement.


The second link relates that FBI Director, Christopher Wray, joined Attorney General Barr in warning that China poses a “diverse and multilayered threat” to America in its espionage efforts. The link reveals that some Chinese students have even been sent to US Universities on missions to “steal intellectual property and trade secrets.” It is my own comment that at the post-graduate level, Chinese students could easily be involved in sensitive research projects funded by various corporations or the US government. In such assignments Chinese students would be in a position to steal considerable amounts of valuable information. FBI Director Wray also stated that there are circa “1000 on-going investigations” involving China’s efforts to steal technological secrets. Who knows how many Chinese agents are stealing vital information who have not yet been caught or identified? The link touches on Chinese tech giant Huawei’s ability to act as an agent of the Chinese government concerning 5G developments.  In the near future, I intend to devote a post to the topic of Huawei’s spying efforts on behalf of China and the threat it poses to all western nations seeking to upgrade to 5G technologies. I believe readers will be surprised to learn how Huawei is advancing China’s plans for global domination. China’s espionage is so extensive that it has been cited as the source of “90%” of economic espionage cases (third link).

One really remarkable example of a highly-placed American who was arrested for spying for China was the Chairman of Harvard University’s Chemistry and Chemical Biology Department (fourth link and fifth link)! These links also report that two Chinese nationals working at a Boston hospital were arrested for spying for China. One turned out to be an officer in the People’s Liberation Army of China so he was clearly a Chinese military spy sent to the USA to steal key medical and technological information. One of these Chinese nationals was arrested as he was trying to smuggle “21 vials of sensitive biological samples” out of the US to China. Consider the target areas of these Chinese spying efforts. Do you suppose a Harvard chairman in charge of the “Chemical Biology” department might have material of value for the Wuhan bio-hazard laboratory in China working on developing biological weapons? I wonder if those “21 vials of sensitive biological samples” were also in the process of being smuggled to the Wuhan, China bio-hazard laboratory…from which the coronavirus plague likely emerged. What made those vials “sensitive?” Were they useful to Chinese scientists developing possible biological weapons or antidotes to them? Since they were stolen from a hospital, did they contain live viruses, infected tissue samples or something else? The answer will probably be revealed at their trial.


China is also using Chinese tourists as spies vs. America. The sixth link details the arrest of a Chinese “tourist” who was caught in the process of obtaining samples of secret US military technology, including a very sensitive piece of radio gear used by the US military for secure military communications. That link also quotes a former Russian espionage agent who warns that China uses “voluminous numbers of agreeable [Chinese] civilians as Chinese agents (emphasis added).” The link also reports that the Chinese intelligence services are “more persistent than Russia’s or Iran’s.” It is no surprise that Russia and Iran are also spying on the USA, but China seems to doing it on an “industrial scale.”

Lest we forget, it was as recent as 2018 that western intelligence services busted a Chinese cyber-hacking network that was conducting a massive cyber-attack vs western democracies (seventh link). The Chinese attack was discovered and revealed by government officials in the USA, the United Kingdom, Canada, Australia and New Zealand. Significantly, these nations constitute the pooled efforts of what are called “The Five Eyes” intelligence alliance (also called Project Echelon). These five English-speaking nations are close allies in obtaining and sharing intelligence that benefits all five nations. In that link, FBI Director Wray commented that China’s goal behind its massive espionage efforts is nothing less that to “replace the US as the world’s leading superpower.” China’s spying programs truly are an existential challenge to the USA and the western world.

The above information has clear biblical prophetic ramifications. As readers of my books realize, there is abundant secular and biblical evidence that the nations in the “Five Eyes” alliance are the modern tribes of Joseph in biblical terminology. These tribes were prophesied to constitute a “brotherly” alliance in the latter days of our age, with Ephraim being a grouping of nations and Manasseh being one single great nation (Genesis 48:8-49:1). The USA is the modern Israelite tribe of Manasseh and the other four nations are the Israelite tribe of Ephraim. For those unfamiliar with my books’ material, this will be a jarring assertion. I urge readers to obtain either copies of my 4-book series detailing the entire history of the ten tribes of Israel or my downloadable E-book that contains most of the historical evidence contained in those books (all are available at my website’s homepage). However, for a sampling of the evidence contained in those books, I invite you to read my free article, The United States of America in Biblical Prophecy. The Israelite tribes of Ephraim and Manasseh were prophesied to have the lion’s share of the world’s blessings in the latter days of our age, and that biblical prophecy has come to pass. For convincing evidence that we are living in the biblical latter days, I urge you to read my article, Are We Living in the Biblical Latter Days? The links cited in this post detail the spying efforts of China as well as mentioning those of Russia and Iran. These three nations are key members of the “Gog Magog” alliance that will come into existence in the latter days of our age (Ezekiel 38:8 and 16). This alliance is prophesied to attack the latter-day nations of the modern ten tribes of Israel and their allies at the very end of our age, just prior to divine intervention when Jesus Christ (the Messiah) returns to this earth (Revelation 19:11-20:4) to rule over a millennial reign of utopian peace. For an in-depth examination of the Bible’s many prophecies about this end-time world war, please read my article, What Ezekiel 38-39 Reveal about a Future World War III.


If you read the three aforementioned articles, you will be surprised at how accurate Biblical prophecy really is in foretelling many specifics about this time we live in, and you will also learn much about what is going to happen in the years ahead of us.