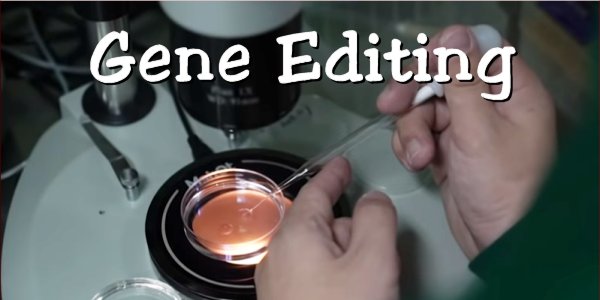 In late November, a Chinese scientist claimed to have developed the world’s first gene-edited human babies (first link). This genetic manipulation of human baby genes was made possible via the use of a technology called CRISPR which enables scientists and lab personnel to manipulate the genes of living organisms. The first link adds that this process would have been illegal in the USA or many European nations, but was apparently legal in China.

The second link adds that the first genetically-modified human babies were twin girls and that another gene-altered human birth “may be underway” already. It also reports that while the USA does not allow genetic manipulation of live human births, it does allow gene-alteration experiments for “lab research.” I cannot help but think that the generic term “lab research” could be stretched to cover a lot of things which many people might find to be dangerous or disturbing. The CRISPR technology can be used, according to the third link, “to control which genes get expressed in plants, animals, and even humans; to delete undesirable traits and, potentially, to add desirable traits.” That sure sounds to me like a technology that enables scientists to “play God” with all kinds of living organisms. The third link also cites scientists who both condemn and support the Chinese scientist’s efforts to use CRISPR gene-editing technology on human beings. The link also warns that “scientists have recently learned that…gene editing can inadvertently wipe out and rearrange large swaths of DNA in ways that may imperil human health (emphasis added).” Hmm. That statement uses a rather vague language to affirm that genetic experiments have gone wrong in ways that were caused by faulty rearrangement of edited DNA.

Do you think that the gene-editing of human beings for military or other currently-impossible tasks would not happen in the USA or western world as well as in China? The fifth link reports that DARPA, a super-secret US defense agency branch which works on “black” (i.e. secret) projects, is already working on gene-altering methods to enable soldiers to go without sleep or food for long periods of time, perform with superhuman endurance, regrow limbs and even undergo mechanical modifications that would enable soldiers to have satellite information transmitted directly to their eyeballs.  Note the date on that link. It shows DARPA has been working on weaponizing gene technologies since at least 2012. There is more. The sixth link adds that by 2017 the USA was using genetic modification and mechanical technologies to create “super soldiers” who could have super-human capabilities such as having 10X binocular vision built directly into their eyeballs [I assume they did these experiments on volunteers]. Having a zoom lens capability in human eyes reminds of a TV program decades ago called “The Bionic Man” if I recall correctly. The character in that fictional TV program had zoom lens/telescopic vision capabilities built into his eyeball. What is revealed in the cited links about DARPA projects tells us only what we are being allowed to know? I have no doubt that secret experiments are being conducted in many places in the world that involve projects far beyond what is being publicly admitted or reported.

The final link is about a recent movie called Rampage (which I did not see) which reportedly featured a genetic-alteration lab orbiting in space conducting experiments that would be forbidden on earth. Some genetic-alterations escape from the orbiting lab and transform animals on earth into monsters who are genetically-enhanced as a result. This is futuristic science-fiction, but science fiction has a way of becoming science-fact over time. Keep in mind the movie warns us about what could happen, not what will happen [I may have to see it now]. The concept of conducting secret experiments in space to evade earthly laws does beg the question of whether secret experiments have already been done on the International Space Station or on any other orbital platform.

All the above information reminds me of some narratives about pre-Flood mankind before the Flood. Genesis 6:4 reports that human “giants” walked the earth at that time. Did this unusual trait come from the human genes God created in Adam and Eve’s DNA or were the Giants the result of genetic engineering activities? Pre-Flood mankind became so violent and corrupt that God had to wipe out the entire pre-Flood race of mankind that was then present on the surface of the earth when the Flood began (Genesis 6:1-7:23). Genesis 7:21-23 also states that all the animal and bird life on the earth was also wiped out, except for the animals and birds are drawn to the Ark by God (Genesis 7:7-9). What criteria led God to decide which animals he would bring to the Ark to restart the animal and bird kingdoms after the Flood? Jasher, an apocryphal book which was once a biblical-approved book in its original content (Joshua 10:13, II Samuel 1:18) states that in the pre-Flood world, mankind had “taught the mixture of animals of one species with the other” and that God was provoked to anger because “all men and animals (emphasis added)” had been “corrupted.” This could mean that all mankind and animals not on the Ark were so corrupted by pre-Flood “designer gene” modifications that God decided to eliminate them all as they were becoming hybrid creatures that God never intended to live on his earth.  In order for pre-Flood mankind to develop the ability to mix animal species together, they had to have electricity, gene-editing technology, genome-mapping technology, and all the same laboratory and scientific technologies mankind is now using to conduct similar gene-mixing lab activities.  There is no question that the pre-Flood world had to have very high technologies to do what Jasher 4:18 says they did.

In Matthew 24:37, Jesus Christ foretold that the latter days of our age (just prior to his Second Coming) would be a mirror image of the civilization and society that existed in the pre-Flood world. This prophecy not only allows for the pre-Flood civilization to be a high-tech society, it actually requires that the pre-Flood society had to be a high-tech society. Since our latter-day society is a high-tech society, it could not possibly mirror the pre-Flood civilization unless both of them were high-tech societies. Within a few generations after the flood, God had to alter the language patterns in the minds of all human beings to prevent them from quickly rebuilding the same pre-Flood technologies that had doomed pre-Flood mankind. The “tower of Babel” in Genesis 11:1-9 was no mere ascending ziggurat. That minimalist technology would hardly have triggered an extreme response from God to cut mankind off from all technological secrets that were written or spoken in the pre-Flood language which had survived the Flood via Noah’s family on the Ark. Genesis 11:6 states God took such a radical step because early post-Flood mankind had already reached a technological “tipping point” where “nothing will be restrained from them, which they have imagined to do.” What they “imagined to do” was rebuild the pre-Flood civilization. A tall ziggurat would not have provoked God to take such decisive action. However, a developing space program could have done so. Genesis 11:4-5 states that the “tower” of Babel was built to have its “rosh”‘ or top/headmost portion “reach unto heaven.” Since our society is supposed to mirror the pre-Flood world, do we have “towers” whose top portions reach unto heaven? Of course, we do. We call them rockets or missiles and the topmost portion is called a nosecone which delivers astronauts or satellites into heaven (outer space). The post-Flood tower of Babel was advancing so incredibly that God himself had to come down and make a personal inspection of the project before deciding that radical intervention was required on his part to stop what mankind was doing. However far advanced mankind’s space program had then advanced, God put a sudden stop to it when he changed everyone’s language and no one could speak the pre-Flood language or understand the pre-Flood script any longer. The Bible does not state God gave any written scripts with the new spoken languages he gave to mankind at Babel. God rendered all of post-Flood mankind suddenly illiterate by his intervention, and the sudden inability to communicate with anyone outside one’s own language group led to mankind being scattered all over the earth. Each nascent nation had to develop over an extended period of time its own way of representing their new spoken languages in written forms. This is why we have so many different languages on earth at this time. All modern languages have developed from the original proto-languages that God gave to mankind at Babel. That mankind now has space programs, genetic-modification technologies to “mix the species” as pre-Flood mankind did confirms we are living in the biblically-prophesied latter days which will culminate in Jesus Christ’s return. The vast majority of mankind does not want God to Divinely impose his laws on this earth and reverse mankind’s wayward and sinful societies, but it is going to happen nonetheless.

For more evidence that we are, indeed, living in the prophesied latter days, please read my article, Are We Living in the Biblical Latter Days? For additional consideration of the technologies of pre-Flood mankind, please listen to my audio message, As It Was in the Days of Noah. That audio message was given to a live audience at a Feast of Tabernacles observance circa 1989-90, so some of its commentary may be dated, but its central points are just as relevant today.