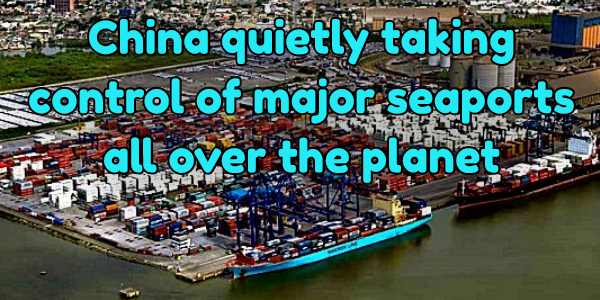 China has been making a very stealthy grab for power over the world’s maritime traffic in a way that few have noticed. China’s container ships bringing endless amounts of Chinese-manufactured goods are commonplace sights at ports all over the world, but China is now implementing a plan to control global maritime traffic by quietly taking control of major seaports all over the planet. It is very clever in that it seems harmless when seen on a case-by-case basis, but very dangerous to China’s rivals and competitors when seen in its totality. To put it directly, China is asserting control over global maritime traffic by taking control of the seaports that host the world’s merchant ships. A few people in positions of power are now noticing the danger and beginning to sound an alarm about the situation, and in the case of the USA, to actually take action to reverse China’s power grab.

The first link provides an overview of how China has, with little fanfare, taken over control or at least significant control over many major seaports all over Asia, Europe, North and South America, etc. Some of the seaports listed in the first link which now have Chinese operating companies with controlling or substantial interest are Marseilles and Le Havre in France, Piraeus in Greece, Valencia in Spain, Rotterdam in the Netherlands, Antwerp in Belgium, Houston, Miami and Long Beach in the USA, Haifa in Israel, etc. China is also planning on building a port in Peru, and it already operates a large port in Sri Lanka and has a huge investment in a Pakistani seaport at Gwadar–which could quickly be turned into a Chinese military base. China also has an overseas base on Djibouti, Africa. These take-overs of major and strategic seaports are part of China’s “Belt and Road” initiative to assert de facto Chinese control or dominance over all global trade. The second link offers an extensive examination of China’s rapidly-growing control of European ports while focusing on the major impact of China’s take-over of the Greek port of Piraeus. EU Commission President Juncker is cited as expressing concerns about Europe’s “collective security” in light of China’s growing control of Europe’s seaports. Juncker is right to be concerned. Of immediate concern is that Chinese gangs are using the new Chinese controls over seaports to facilitate smuggling operations. Such smuggling operations could include all kinds of embargoed or undeclared goods, human trafficking, drug smuggling, etc. The link includes a map and chart which shows how extensive China’s port-grabbing program has advanced in Europe and the Mediterranean Sea regions. China is gaining the ability to “squeeze” Europe in a future crisis and has the NATO/EU nations increasingly surrounded by Chinese control points.

The third link and fourth link report that The Trump administration has seen the dangers of allowing China to control US seaport operations and has ordered China to divest itself of any ownership of the Long Beach seaport. Chinese ownership of this US port has been “rescinded” and ownership rights have been transferred to a US company. However, China retained generous docking rights for its ships at that port for 20 years. The fourth link notes that it was the Obama administration which yielded controlling rights over Long Beach’s port in 2012 and that this port is the second-largest container-handling port in the USA.

In what was a surprise to me, even security-conscious Israel has signed over control of its Haifa seaport to a Chinese company. I find this truly astonishing as China is, at the very least, an indirect ally of Iran, Syria, and Hezbollah. Russia and China are strategic allies and Russia is a key ally of Iran. Russia also controls Syria as a vassal state and Hezbollah, Iran and Syria are all close allies desiring to “wipe Israel off the map.” The fifth link and sixth link report that the USA is warning Israel that the US Navy may not be able to use Haifa as a port due to the heightened risks of Chinese control over Haifa’s port facilities and voices within Israel are also questioning how China was granted control over a key Israeli seaport. Why would Israel grant control of a key Israeli seaport to China, an ally of the nations wanting to destroy Israel? Was it treason, a huge bribe given to someone, sheer incompetence or some unknown “quid pro quo” decided in a secret back-room negotiation? However it came to be, Israel should rescind this deal even as the USA rescinded China’s right to control the Long Beach, CA port facility. It was reported in the previously-cited links that Chinese smugglers can utilize China’s control of seaports to bring forbidden cargoes into ports unnoticed. How hard would it be for Hezbollah agents to smuggle in a weapon of mass destruction inside a Chinese ship (or a ship flagged to any nation) and blow it up after it docks in Haifa (or fire hidden cruise missiles at every major Israeli city and strategic military base)?

There is a darker plan, I believe, to China’s aggressive actions to take over and control the world’s seaports. Be sure to look at the map in the second link of the European seaports in which China already has substantial controlling interests. China literally is surrounding NATO nations, by taking over their seaports. The world has seen how quickly China can militarize ports that were constructed on islands and atolls in the South China Sea, China could surreptitiously place cruise missiles, EMP weapons, etc. on ships bound for Chinese-operated ports in Europe (and elsewhere) and launch a simultaneous, surprise “Pearl Harbor” style attack on all NATO nations and their allies at some point in the future. China could launch a supersonic cruise missile from scores of Chinese ships heading into Europe’s ports at the same time Russia launches supersonic cruise missiles at NATO facilitates all over Europe from its Kaliningrad enclave located on the Baltic Sea between Poland and Lithuania. Such a simultaneous attack would strike virtually all NATO military targets within minutes before NATO had any time to react. A future World War III could be over within minutes if Russia and China used this tactic to attack the NATO nations. China could also attack the USA, Canada, Australia, New Zealand, Israel, India, Japan, etc. by firing hidden cruise missiles with all kinds of warheads from its numerous cargo and container ships heading to ports in those nations at the same time a surprise attack was launched from Chinese ships within Chinese-controlled seaports in Europe. Those missiles would also be launched at all NATO warships anywhere within missile range of the Chinese ships firing salvos of cruise missiles at all targets of value. World War III could end with a Russian-Chinese victory over the USA and NATO within about 15 minutes if the attack took place as described above. I hope that the war-planners in the western world get their heads out of the sand and wake up to the danger of Chinese control of the seaports of the Western world before it is too late.

The danger described above is not only real; it is inevitable. As long-time reader of my blog know, the biblical prophecy in Ezekiel 38-39 foretells that the Gog-Magog alliance (Russia, China, Iran, etc.) will launch a surprise, “Pearl-Harbor” type of attack against all the nations of the Western world at the very end of this age just before God divinely intervenes in the war to crush all the forces of the Gog-Magog alliance. In a very sober commentary about the loss of life that will occur in this final World War III, Ezekiel 39:2 prophesies the Gog-Magog forces (or entire nations?) will suffer a  death rate of 87.5% of their people. The death rate will be incredibly high on both sides. Clearly, most of the world’s people will die in this age-ending war. In Matthew 24:21-22, Jesus Christ prophesied that unless he were to come early in the prophetic timetables (“cut short the days”), no life would survive on this planet. Ezekiel 39:3 also foretells that many of the missiles fired by Russia, China, and their allies will not work right. That verse prophesies the “arrows” (long-distance weapons in ancient vocabulary) and “bows” (missile launchers) of the Gog-Magog alliance will malfunction and not destroy the war-making capacity of the western nations. This could be a result of divine action or secret countermeasures by the Western nations. We do not know when this attack will come, but I have no doubt the planning for this surprise attack is already well-underway in Moscow, Beijing, and Tehran. Since China agreed to surrender control of the Long Beach port but retained preferential docking rights (and unimpeded approach rights) for Chinese ships for a period of twenty years, that tells me this surprise attack is planned for some time within the next twenty years. I suspect the attack will come long before that twenty-year window expires. What is clear is that the Chinese effort to grab control of the world’s seaports is one more clear step to fulfill the prophecy of Ezekiel 38-39–a prophecy for the “latter days” of our age.

For more in-depth information from a biblical perspective about the above topics, please read my free articles, Are We Living in the Biblical Latter Days?, What Ezekiel 38-39 Reveal about a Future World War III, The USA in Biblical Prophecy and Japan’s Role in Biblical Prophecy.