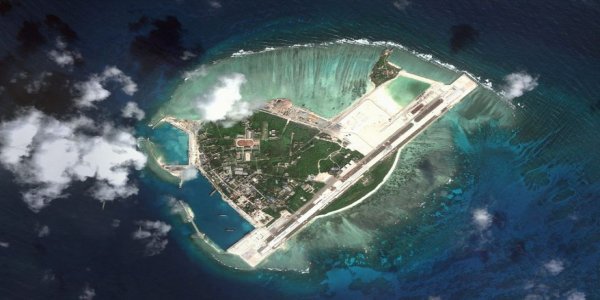 Many media articles have been written about China’s bellicose efforts to control and essentially annex the South China Sea, and my blog has had several posts on this same subject. It has come to my attention recently that the situation is far worse than we have realized, and I am passing this information on to readers of this blog. All the information presented below is based on information from reputable media sources.

I think we are all aware that China has been building an artificial island in the South China Sea into a large size that can hold a military airstrip, base a variety of missiles and also dock Chinese warships. That is bad enough, and the USA and its allies have done nothing to stop or even counter this Chinese power grab. However, the first link reports that China has actually been building four large islands in the South China Sea which can host Chinese military bases and control the South China Sea via their military presence on these islands. The link refers to these militarized islands as “China’s four stationary …aircraft carriers.” These four artificial islands have been expanded to include 14.5 square kilometers of usable space (!) for China’s military forces. That is a lot of territory on which to base warplanes and troops, missiles and also port facilities to repair and resupply surface warships and submarines. The link details how China is using civilian “Ro-Ro” ships in its military preparation efforts and the link also suggests what the USA could be doing to counter this Chinese effort and what should be done to build up the US Navy. Since Obama has presided over a steady decline in US military power, it is all but certain he will continue to weaken US military forces. We very much need a new US president who will embark on robust US military rebuilding program.

Obviously, if China’s island “aircraft carriers” already have 14.5 square kilometers, they can hold far more military weaponry than the US can deploy on its naval aircraft carriers. As I have noted in previous posts, China has had the ability to finance construction of many aircraft carriers, but it has declined to do so. I have also concluded in my posts that China’s refusal to embark on a massive aircraft carrier building program is evidence that China has made a decision that it is far easier to sink naval aircraft carriers than to defend them. That is why China has built a wide range of anti-carrier weaponry (ballistic and cruise missiles, new torpedoes, etc.) to sink US carriers. While you can sink a naval aircraft carrier, you cannot “sink” an island, so if the Chinese military island bases are attacked in a future war, they can rebuild the facilities on them as quickly as possible. Of course, the downside of having island “carriers” is that they cannot move so they are always going to be stationary targets.

The news gets worse. The second link reports that China has begun building a fifth island base which will surely be built into a military base to threaten all sea commerce and naval vessels in the South China Sea. Meanwhile, Obama and the USA do nothing about this militarization of the South China Sea by the Chinese military. America’s Pacific allies are also doing nothing. Perhaps they are waiting for US leadership. Obama is either incapable or unwilling to provide it, so nothing is happening yet to counter China’s actions. China’s war planners are likely amazed that they are being permitted to gradually annex the entire South China Sea into their orbit and their rivals are doing nothing to either stop or counter them. China’s gradual military absorption of the South China Sea reminds me of Adolph Hitler’s “Anschluss” of Austria and the Sudetenland of Czechoslovakia in the prelude to World War II. Hitler was able to “get away with” these blatant military takeovers of territory while the Western powers did nothing to stop or counter him. This emboldened him to launch World War II. China is engaged in an “Anschluss” over the entire South China Sea and the Western and allied powers are doing nothing to stop or counter China’s actions. This could easily embolden China into taking actions that at the very least will lead to a regional war.

The news gets even worse. The last link reports that China has successfully bid to gain operational control over the Australian port of Darwin on Australia’s north coast. At some point in the future, I expect China will use its rights to militarize the port in their behalf, either openly or secretly. Their advance into Darwin means that they are surrounding Indonesia and also gaining a base from which to fire cruise missiles at many or all Australian military bases at the beginning of a new war. Their missiles could easily be placed surreptitiously on Chinese merchant or Ro-Ro ships and fired from them without anyone realizing that those ships had been militarized. It appears that a Chinese “Pearl Harbor” type attack on Australasia is in their war plans already. Those who have read the novel, Ghost Fleet, by P.W. Singer and August Cole, know that China could use their Ro-Ro ships, cyber warfare and all kinds of asymmetrical warfare capabilities to attack America and its allies at the beginning of the next world war. If you have not read this book, I urge you to do so. One Chinese Ro-Ro ship docked in Darwin could easily disgorge large amounts of Chinese troops as well as tanks and other military equipment to easily take over Darwin and make it a Chinese military base. The final link reports that China has many basing agreements at ports all over the world now. Obviously, they could do the same thing at those ports and coordinate the attacks so they all occur at the same moment–catching all their rivals off-guard.

These developments are completely in harmony with the prophecy of Ezekiel 38-39 that Russia, China, Iran and their allies will launch a surprise attack against the USA, NATO and their Pacific allies at the very end of this age. Personally, my understanding of prophecy is that this attack will not come until after the 3 and 1/2 years of the ministry and eventual death of the Two Witnesses, but I am not infallible. I could be wrong. Russia, China and Iran are rapidly preparing for World War III already in their militarization programs. The USA and the West are still…asleep.

For more on the above topics, I urge readers to review my articles, What Ezekiel 38-39 Reveal about a Future World War III, and The Two Witnesses.