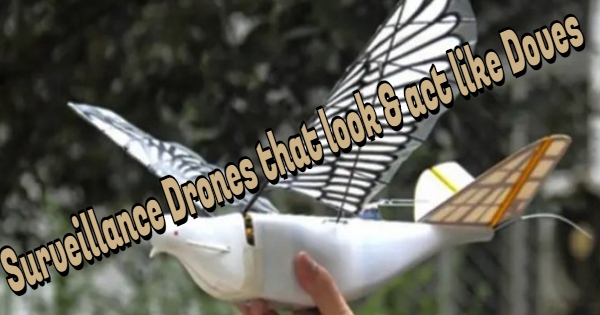 As I think readers realize, Communist China has made incredible advances in monitoring and controlling its entire human population. In the past it has implemented biometric identification, facial-recognition technologies adapted to financial transactions, “citizenship scores” for its people and even gait-recognition technology. China has now added a new technique for monitoring and controlling its people, and it is called “Project Dove.” This new project features sophisticated new surveillance drones designed to look and act like flying birds. Reportedly, they can even fly undetected by sophisticated radars (first link). China has completed its wide-scale field-testing of the program.

The second link, from Reuters, reports that the Chinese government has deployed drones to monitor its population during the current coronavirus outbreak. The drones look for people who are meeting other people outside and order them to return to their houses. It is not clear if these surveillance drones include the new bird-like drones, but it is likely the Chinese will use every type of drone they have to see which is the most effective at being able to monitor people without being noticed. The second link also reports the Chinese surveillance drone program is so extensive that it not only detects people out in public, but the drones have loudspeakers to “order” people to stop public activities and go back indoors. It cites one specific incident wherein a Chinese drone located a group of people playing a mahjong game and, via loudspeaker, issued this order: “You have been spotted. Stop playing and leave the site as soon as possible.” The report assures us the Chinese people were “amused,” but such an experience would come across to the vast majority of westerners as the penultimate manifestation of an Orwellian “Big Brother” technology. How would you react if you had federal, state and local governments watching your every move with surveillance drones that can give you voiced orders? This example does beg the question: Are these surveillance drones equipped with AI programs that recognize certain types of behavior and transmit an automated message to people when they see certain types of “suspicious” activity or are they piloted by actual humans who watch people “live” and transmit orders to people via wireless voice commands over a loudspeaker on the drone? Theoretically, both methods could be used.


The third link adds more details about how extensive the monitoring of all human activities is becoming in China, and how drones can be used to monitor people in ways we would not expect. China’s surveillance technologies are even being used to fine jaywalkers and traffic violators. Drones are being used to “spray disinfectant…[at] train and bus stations” to combat the coronavirus, and drones can even be used now to take remotely people’s temperatures without the need for humans to do this medical test. Be sure to watch the videos that are embedded in this link. Notice the jaunty, positive music to reassure us that it is entirely alright to be ordered by a drone to come out onto your balcony so a surveillance drone can take your temperature–to see if the health police need to come to your apartment and take you away. I find this to be a chilling example of how far technology can now be used to control and monitor all aspects of individual behavior.


It is also worth pointing out that there are, many, military and intelligence uses these new surveillance drones (bird-like and otherwise) can perform. The new bird-like drones even mimic the wing-flapping and swooping flying patterns of birds so humans will not realize they are actually “spy” technologies. Such technologies would be invaluable to penetrate an enemy’s defenses and send back “live” video feeds of an enemy force’s deployment and disposition of its forces. Such drones could be equipped with explosives to detonate soon after a bird-like attack drone lands on an enemy facility. One could attack civilian infrastructure targets as well as military targets with such drones. I’ve seen videos demonstrating that small drones can fly to an individual targeted for assassination and kill them with a single, small shaped-charge bullet to the temple of their head. Think of how one nation could decapitate the leadership of a rival nation by using such small, “killer” drones to attack the top government officials of a target nation before the attack is launched. The third link mentions that Chinese drones can even be used to spray chemicals to disinfect public spaces such as train and bus stations. This technology could easily be weaponized. Drones could be armed, not with disinfectant, but with the coronavirus (or any other chemical or biological weapon) and fly over cities or sports stadiums to infect entire populations via an aerosolized distribution system. The Chinese are not the only nation experimenting with drones that mimic birds or other types of wildlife. The first link reports that the US government, as early as 2013, obtained 30 drones disguised to look like birds of prey. How has the US government tested and used these disguised drones? No one knows. Without doubt, other high-tech nations are developing and deploying similar technologies.


Biblical prophecy warns us in Revelation 13 that a final, global-governing system called the “beast” power will be able to monitor and micromanage the world’s financial transactions so extensively that no one can effectively transact business unless they are part of its system (Revelation 13:16-17). Any government that exercises such as “control-freak” monitoring and control of its people as is prophesied in Revelation 13 will surely also be exercising similar monitoring and control of all other types of human behavior as well. The types of people-monitoring drones described above will surely be able to perform similar people-control tasks on a global basis once the beast power comes into existence. When will this beast power come into existence? We do not know, but we are warned in Revelation 17-18 that it will come into existence after the current global economic/financial/political system experiences a sudden and catastrophic global failure. Such a global failure could only occur in a sophisticated society that features globally-interconnected digital systems, which is what we now have in the modern world. These biblical prophecies will only be fulfilled in a time the Bible refers to as the “latter days,” “time of the end” etc. For abundant evidence that we are living in these biblically-prophesied times, please read my article, Are We Living in the Biblical Latter Days? For an in-depth examination of how the modern global system will suddenly collapse and be replaced by the new beast system, I invite you to review my article, Is “Babylon the Great” about to Fall…Ushering in a New “Beast” System? In II Timothy 3:1-9, the Apostle Paul prophesied that the latter days would be a “perilous” time. Events have proved his prophecy to be right on target.