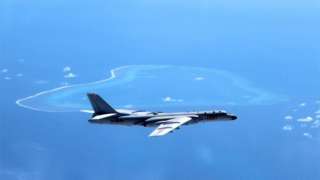 The Chinese Air Force provoked the Japanese government recently when eight Chinese warplanes “flew between Japanese islands” (first link). These two links offer two perspectives on the tensions that are growing between China and Japan. The links note that the Chinese warplanes didn’t technically fly over Japanese airspace, but their presence between Japanese islands was both provocative and deliberate. I’m sure we can assume this incident didn’t happen by accident. The second link reports that not only have incidents occurred before in this area between Chinese and Japanese warplanes, but their coast guard ships have also had similar confrontations in the same region. The first link shows how the airspace claims of Japan and China are overlapping and this fact creates a possibility where their forces could come into conflict either deliberately or accidentally.

China continues to flex its growing military muscles, but its bellicose actions are provoking its neighboring nations into alliances against it in both theaters. There is a growing chance of a regional war occurring as a result of China’s provocations. This post is intended to “calm the waters” a bit by pointing out that a regional war in this area of the world is not the final climactic war prophesied in Ezekiel 38-39. Even though Ezekiel 38-39 prophesy about an age-ending World War III that will occur all over the world (which will threaten all life–Matthew 24:21-22), there will also be many “wars and rumors of wars” (Matthew 24:6) that will precede the final climactic world war of this age. Matthew 24:6 also says that “the end [of our age] is not yet” when various “wars and rumors of wars” occur among the nations. It is entirely possible that China will get involved in a regional war with its neighboring nations and elements of the US military fighting before the final Ezekiel 38-39 war occurs. Russia, the other main power in the Gog-Magog alliance identified in Ezekiel 38:2-6, is already fighting two regional wars in the Ukraine and in Syria. Iran, also mentioned as “Persia” in the Gog-Magog alliance of the latter days, is involved militarily inside Iraq fighting with the Shiite central Iraqi government forces and Iranian military personnel have also been engaged in (and killed in) the Syrian civil war. China is not yet engaged in any regional or proxy war, but it may actually want such a war so it can test its many types of new military hardware against western forces. I mention this as I do not want readers to assume the war prophesied in Ezekiel 38-39 is starting if China provokes or becomes engaged in a regional war in the South China Sea or East China Sea in the future. The Ezekiel 38-39 war will occur when the Gog-Magog alliance nations collectively attack and invade the homelands of the modern ten tribes of Israel (called “Israel,” “people of Israel” or “house of Israel” in Ezekiel 38-39). The modern ten tribes of Israel live in North America, mainland Europe, Scandinavia, Australia and New Zealand, as is made very clear in my books on the subject which include voluminous source documentation. If readers have not done so, I urge you to order my set of four printed books, or download my E-book on the subject (The “Lost” Ten tribes of Israel…Found!) as they will give you a perspective on ancient and modern history that you will never see mentioned in any modern history text book. Major Israelite kingdoms and empires have been all but deleted from the history texts as this world does not want people to know anything about how powerful the descendants of the ten tribes became after their exile from the old Promised Land.

The Ezekiel 38-39 war will not occur until the homelands of the modern ten tribes of Israel are invaded by the Gog-Magog alliance in a global World War III. A regional war (even a large one) limited to the geography of the South and/or East China Sea will not qualify as the war prophesied in Ezekiel 38-39.